A geochemist's Periodic Table of Elements

I suspect that a lot of you readers share with me a lifelong fascination with the Periodic Table of Elements. I'm not sure where I first saw it -- I think maybe it was a poster on the wall of my fifth grade science classroom -- but I was taken from the start. Long before I understood what any of the symbols or numbers meant, I could tell it had significance beyond being a table of facts. I would stare at the poster (presumably while spacing out in class and failing to pay attention to my teacher) at length. I'd read the names of the elements and explore the patterns (and occasional irksome deviations from pattern) among the numbers printed on it. It was clear that this chart was more than just a tabular display of data; something about the way that it was organized described some kind of fundamental order to the stuff that made up the universe.

Eventually, of course, I learned what those numbers and symbols meant. I'm still learning; I've read several fascinating narratives about chemistry, my very favorite of them being Oliver Sacks' Uncle Tungsten: Memories of a Chemical Boyhood (indeed, it's one of my favorite books ever). The atomic numbers, atomic masses, valencies, and chemical families describe a systematic understanding of the fundamental building blocks of the world. It's an understanding developed by a long history of scientists standing (in Newton's conceit) on each others' shoulders, going all the way back into the alchemists of antiquity, and really, even beyond, being rooted in humans' first engineering of the naturally occurring elemental metals, that step that took us from Stone Age cave dwellers to Bronze Age civilization.

My love for the Periodic Table hit a rough patch when I was a sophomore in college, when I took Mineralogy as a part of my geology major. I was learning a lot about how different kinds of atoms built up the rocks around me, but the Periodic Table never seemed to provide me with the information I needed. So it was a real pleasure a couple of months ago to follow a link Tweeted by AGU blogger Ryan Anderson, which took me to a Geochemist's Periodic Table. While it looks somewhat familiar, it represents a whole 'nother kind of information. This is not a new publication, but it was new to me.

Bruce Railsback's An Earth Scientist's Periodic Table of the Elements and Their Ions shows physical properties and abundances of elements and their ions and isotopes of importance to Earth scientists.

The Periodic Table of Elements that is displayed in most chemistry classrooms typically shows information of interest to chemists (no surprise there). The investigation and experiment that led to the production of the Periodic Table involved studying the elements in their native state, or in solution, or in covalently bonded compounds with precise chemical formulae.

Geologists don't often deal with native elements or covalently bonded compounds. They deal with minerals, which are mostly not either one of those. A mineral is a naturally occurring, inorganic, homogeneous, crystalline solid with a definite composition and an ordered atomic arrangement. This definition (which is copied verbatim from my notes from Professor Jack Cheney's class in 1993) seems straightforward on its face, but when you take it apart, it turns out to be really, really different from the covalently bonded molecules we all learned about in high school chemistry.

That "crystalline" business is a big difference. In covalently bonded compounds, like water or carbon dioxide or butane, you're dealing with lots of little individual entities, each one of them identical (H2O or CO2 or C4H10). Crystalline compounds are the Borg of chemicals. There aren't individual molecules; instead, you have an infinitely (or seemingly infinitely) repeating ordered arrangement of atoms. One very simple example is salt, NaCl, whose sodium and chlorine atoms aren't paired off like lovebirds but instead form a Tinkertoy arrangement of an endlessly repeating structure where every singly ionized sodium atom is equidistant from six chlorine ions, and vice versa.

Still, you can get away with imaging salt to be kind of like covalent compounds and keep moving along. But there's not many minerals that are so simple. In particular, silicate minerals are a mess. Silicates are minerals that contain silicon ions, which is simple enough. Silicon atoms, like the carbon atoms that form the backbone of organic chemicals, like to give up the four electrons in their outermost shell, thus inviting connections with negatively charged ions. One particularly common negatively charged ion is oxygen. In nature, silicon most commonly occurs in a form where it's covalently bonded to four oxygen atoms, equally spaced around the silicon atom; in three dimensions, the equal spacing of four things around a central thing gives you a tetrahedral shape. The SiO4 group has a 4- charge so wants to bond to various metals that commonly occur as positively charged ions.

The positively charged ions -- the silicon and the metals -- hold their negatively electrons very close, so are small in diameter. The oxygen ions, with their extra electrons, are puffed up. You wind up with a crystal whose internal space is mostly made up of oxygen ions in linked tetrahedra, with little tiny silicon and metal ions crammed inside and between the tetrahedra. The thing is, the crystal doesn't care what flavor of ion is crammed into that little space; as long as it's roughly the right size and charge, it can be accommodated.

A very simple silicate is forsterite, which has the chemical formula Mg2SiO4. The silicon tetrahedra are arranged in a geometric, repeating lattice, with two magnesium ions occupying regularly repeating spaces in between them. There is a similar mineral called fayalite, which has the chemical formula Fe2SiO4: two iron ions in the spaces between tetrahedra. In nature, though, you almost never get pure forsterite or fayalite, because the crystal can use either one of them to fill the gaps between the silicon tetrahedra. In nature, you get a green mineral called olivine that's a solution of the two -- not a mixture in which there's some bits of forsterite and some bits of fayalite, but a single crystal in which magnesium and iron ions are randomly distributed within the lattice. There are often similarly-sized and -charged manganese and nickel ions stuck in there too.

Olivine is one of the most abundant minerals in the solar system, but there's not a lot of it exposed at the surface of the Earth because it decomposes rapidly into other minerals in the presence of water.

Anyway, if you look closely at this Periodic Table you can see why iron and magnesium so often substitute for each other -- they're very abundant (the size of the name of the element tells you its relative abundance), and in their 2+ charge they have similar, though not identical, atomic radii. Notice that triply ionized iron has virtually identical atomic radius to magnesium 2+. So it would really love to go into that same coordination site, but if you stick an iron 3+ in there you get an extra +1 charge. Nature accomodates this in a variety of ways; it might replace one of the silicon 4+ ions with an aluminum 3+ ion, for instance. Understanding which ionic states of which elements get included in which kinds of crystals as a rock cools from a melt is a fundamental aspect of the disciplines of mineralogy and petrology. I sure wish I'd had this Periodic Table handy when I was taking min and pet!

Bruce Railsback's An Earth Scientist's Periodic Table of the Elements and Their Ions shows physical properties and abundances of elements and their ions and isotopes of importance to Earth scientists.

Postscript a few hours later: someone on Twitter shared this "Astrophysicist's Periodic Table" with me and it made me laugh, so I'm resharing it: 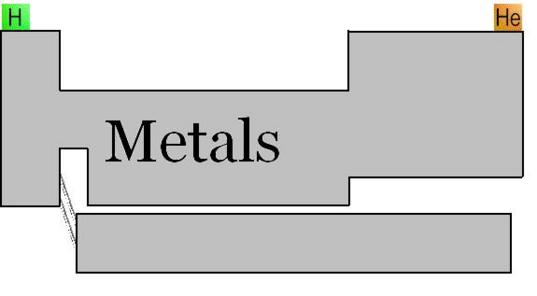 Dear Emily, Thank you for your fascinating blog about the geologist's periodic table. Given your obvious liking for the periodic table you might enjoy my books on the subject. Please see my website at ericscerri.com/ for various resources on the periodic table. Other readers may also find some of this material interesting. regards, eric scerri PhD UCLA, Department of Chemistry

This is very interesting, Emily! Thanks for pointing it out to PS members.

Thank you Emily, I like your publication a lot, and I encounter she fascinating and useful, I also like both topics, the geoquímica from the chemical point of view and certainly the Periodic Table.

Yes, I too share your fascination with the elements. Wrote an article suggesting it is related to fascination with prime numbers, platonic solids, and elementary particles ... in other words, a desire to get at the basics.

Hi, My name is Will. I write children songs that are really funky. Recently, I have produced an original song titled "Periodic Elements - Little Things (New)" that creatively uses all 118 periodic elements. I found your website on the subject very informative and I thought you might be interested to hear the song. Link to song: http://www.yesnack.com/free/periodicelements-littlethings.mp3 Link to lyrics: http://www.yesnack.com/free/PeriodicElements-LittleThings_Lyrics.pdf It is my desire to share this song as a fee resource with individuals/organizations promoting science and education. Every so often a new periodic element is named and the best solution to me is to make it free and keep it current over the internet. I will continually update the song with the new name as it is released. Example: #115 - Ununpentium is about to be named. Once the official name is revealed, I would rerecord the vocals on the last section and re-upload the song for free as a public service. I hope you enjoy and I look forward to your response. Thanks Truly, Will Avery | Producer www.yesnack.com Making Learning Delicious