As regular readers will know, I make a lot of montages and comparisons of different worlds in the solar system. One of the tricks I use to make these montages look better is to try to select views that have similar phase -- meaning that a similar amount of the globe is lit in each one. Being at similar phase (and oriented so that the Sun appears to be coming from the same direction for all the objects) ties them all together compositionally.

So. I'm working on a project that involves such a montage of outer planet moons, and I just couldn't find a view of one of them -- Tethys, one of Saturn's mid-sized icy moons, similar in size to Dione and also, by the way, Charon and Ceres -- at a phase that matched the others. When I'm looking for pretty color versions of Cassini images, I always check Gordan Ugarkovic's Flickr stream, but he didn't seem to have one there either. So I fired off an email, and within a day Gordan had dug into the Cassini archives and pulled out the data to produce the very lovely high-resolution view below. Click to enlarge! 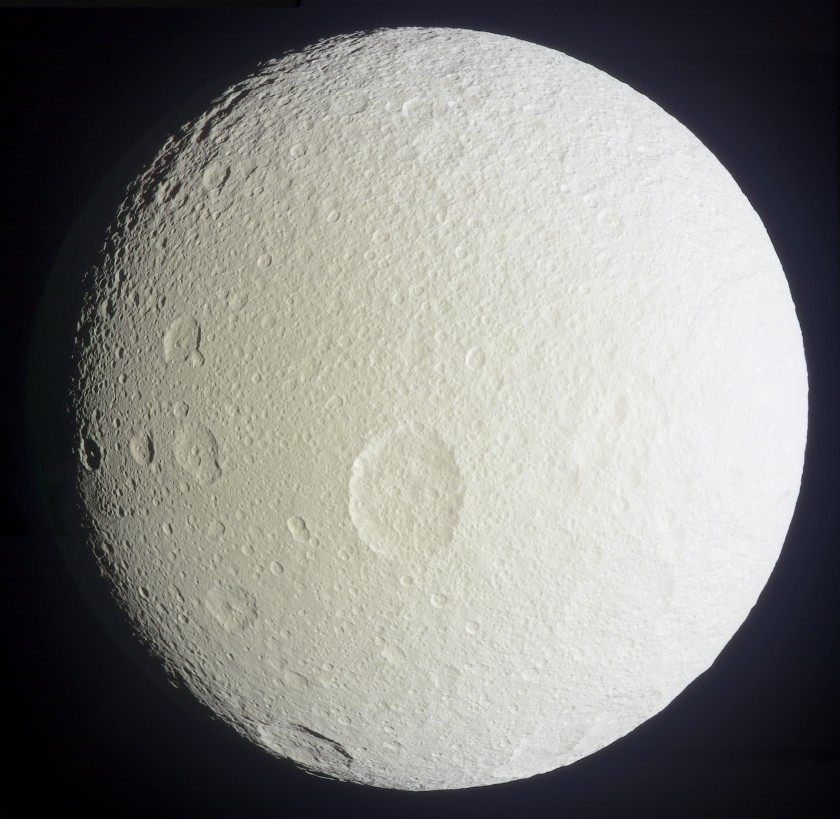 The view is a mosaic of four color images. Data were captured by Cassini on October 14, 2009 through infrared, green, and ultraviolet filters. Gordan processed this "natural-ish" color version from this more extended palette. The large crater near the center of the disk is Penelope; to the west of Penelope there is a north-south line of the three craters Phemius, Polyphemus, and Ajax. Antinous is the large crater far to the south of these. That "T" of craters is one of the things I use to tell Tethys from Dione or Rhea. Another diagnostic Tethys feature, the S-curve of Ithaca Chasma, is on the back side of Tethys from this perspective.

Why wasn't a processed version of this view available before? Because it's a color mosaic. We usually make color photos from space image data by combining three or four images taken through different filters. (Three if it's a straight red, green, blue combo; four if such a combo is overlaid on a sharper, higher-resolution image, often taken through a clear filter, or made by a super-resolution combination of other images.) We make mosaics by puzzle-piecing two or more images together. This view is a 2x2 mosaic, so there were a total of four tiles covering Tethys, each of which consisted of three or four different color filter images. That's 12 or 16 individual files to download, calibrate, clean, and compose -- a lot of work!

There are a lot of these color mosaics lying around in the Cassini data archives, waiting for someone to take the time to assemble them into beautiful portraits of mini planets...