Pretty picture: Halo on a halo?

Check out this curious picture taken recently by Cassini: 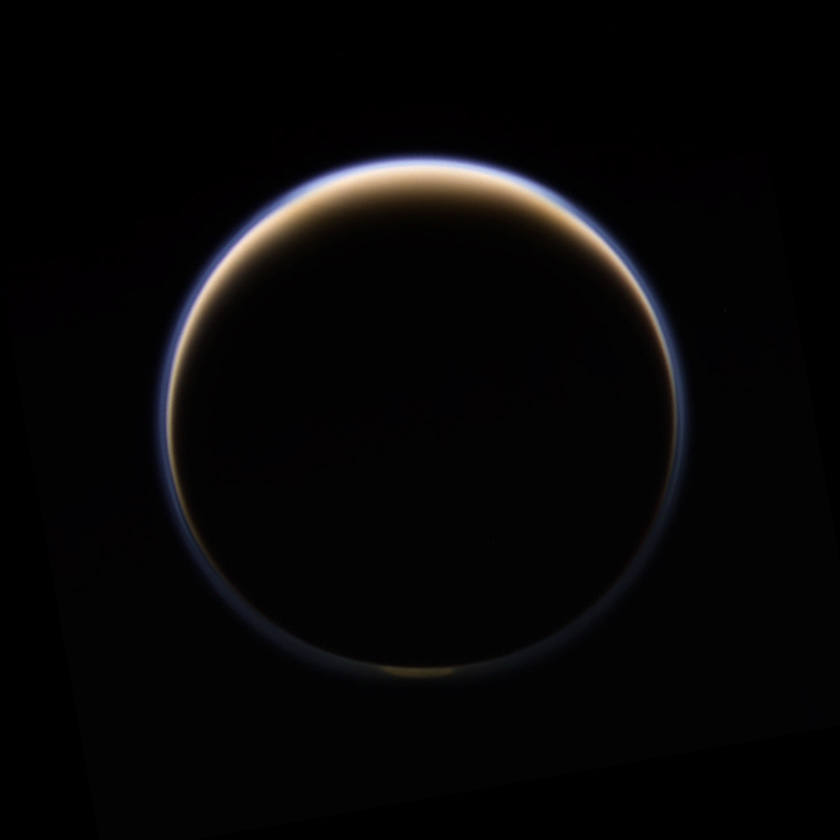 Crescent Titan with a cloud cap?

Cassini took this photo of Titan on June 6, 2012, on its way into the "T83" flyby. Cassini sees Titan at very high phase, and the Sun lights up its atmosphere from behind.

This image is cool to begin with because it's taken at such a high phase that we can see sunlight scattering through Titan's atmosphere completely around its globe. You're seeing every sunrise and sunset happening all over Titan, all at once. What makes it curious is the little lenticular cap at the bottom of the image, at Titan's southern winter pole. The cap is also visible in images of Titan taken as Cassini was departing the flyby, like this one. If something like this has been visible in Cassini's images of Titan before, I don't recall seeing it. (Please point it out in the comments if it's been seen before.) I don't have any idea what it is. Hopefully someone will tell me in a talk at the Division of Planetary Sciences meeting in the fall.

Cassini has been at Saturn for very nearly eight years, and has flown past Titan a hundred times, and there are still new things to see!

Alan, the consensus back then was that that is an optical artifact in the camera, an internal reflection of sunlight in the optics. Those images were taken by the wide-angle camera and at a high phase angle and that camera is much more susceptible to stray light at those angles. If you look at that ring closely, you can see it doesn't move consistently with the rest of Titan and it doesn't change apparent size as Titan does when its distance changes between subsequent frames. The current effect on the other hand is very much real and first hints of something "funny" happening at the south pole started appearing about a year ago. Several months ago it was becoming obvious there was a separate layer of orange haze piling up where normally just the blue, detached haze would persist.

Thanks Gordan, that makes sense. Still very curious about this new phenomenon.

We may merely be witnessing the way a polar "hood" appears over the winter pole. Note the structure over the north pole is now fading and there were prominent layers back when Cassini arrived, when it was the winter pole - whereas the south pole looked unremarkable. Very cool to watch this transition unfold and it makes these crescent images even more interesting.

Cassini has photographed similar features in the atmosphere of Titan in the past. This is not an optical artifact of some sort, because the picture has been turned by 27° and it would't make sense for some kind of artifact to appear in that location. I don't think that the cap represents the haze that Gordon mentions either. If you look very closely at the photo, you can see a thin layer in the atmosphere over the south pole, which is probably the haze that Gordon refers to. I think there are two more likely scenarios. As Gordon says, Cassini has taken some pretty stunning images of massive methane cloud formations over the north pole, and other pictures imply that similar things exist over the south pole during a different season, so it might very well be that what we see is a reflection off them. Nevertheless, we also shouldn't exclude the possibility (I think this is quite likely), that what we're seeing is a reflection off a lake on the surface of Titan. There is a very interesting picture of a reflection off the surface of a lake near the north pole, so this might be the same thing, just off the south pole.