Hold the Moon in Your Hands

I do a little freelance work as a Contributing Editor to Sky & Telescope magazine.  In January I got a mysterious email from editor Robert Naeye: "About 6 weeks from now a package will be delivered to you...I want to keep it a surprise, but I can guarantee that you will be delighted by what you find inside." Mysterious, no?

Well, Bob was right about my delight; the package contained the Moon. Not the real one, of course, or even a bit of rock from one, but it is a 30-centimeter-diameter globe, covered in an absolutely seamless mosaic of Lunar Reconnaissance Orbiter images.  It's dark, as the Moon should be, and extravagantly labeled with craters, maria, and other feature names, and all the human and robotic landing sites picked out in little yellow labels (with landing dates!) 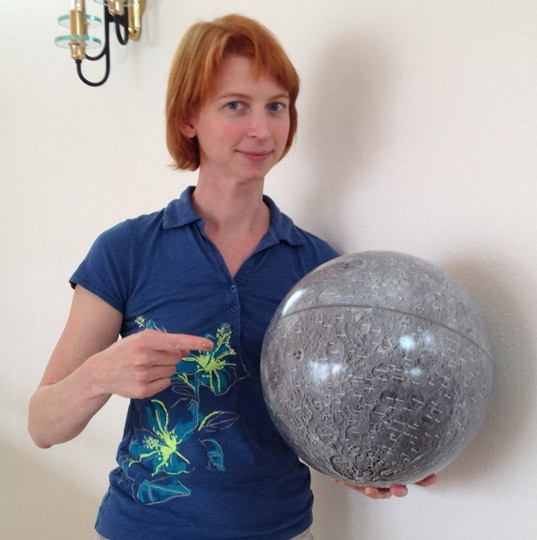 A 12-inch globe of the Moon using a Lunar Reconnaissance Orbiter image base map produced by Replogle Globes for Sky & Telescope. Emily Lakdawalla for scale.

What I most need 3D models for is to understand the orientation of a spacecraft's 2D photo. One of my favorite such images is the view of the Moon from Japan's ill-fated Nozomi mission to Mars: 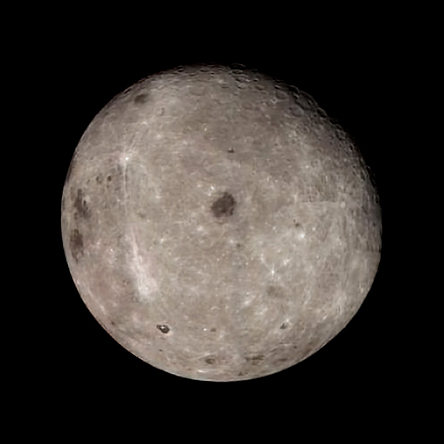 It was easy to rotate the globe and orient it to match the Nozomi image (of course that bright eyeball of the crater Tsiolkovskiy helps a lot); and then it was fun to wander between the Nozomi photo and the globe to read the names of the features I could see in the Nozomi photo. For instance, there's an isosceles triangle made by Tsiolkovskiy, Mare Moscoviense, and a third crater with a tiny bit of mare fill that turned out to be Aitken, the feature for which the northern edge of the South Pole-Aitken Basin is named.

The one thing that took a little adjustment is that the bright rays of fresh craters are difficult to make out on the globe. This results from compromises that had to be made in order to maximize the legibility of the globe, a process described in detail here by Kelly Beatty.  Even Tycho's rays are hard to see.  But that's my only complaint. The detail is just stunning. I don't keep a magnifying glass in my desk, but I'm pretty sure that I'm seeing detail down to the limit of my ability to resolve it with the unaided eye. That makes sense, since Kelly mentions at the end of his blog post that "the LROC original is so detailed that making a globe 32 inches [81 centimeters] across — the largest in Replogle's repertoire — isn't completely wacky."

At 100 bucks, it's not cheap. But it's beautiful, and I've already used it to help me find my way around the Moon. You can get one here.

We should be selling these things in our gift shop. (I volunteer at the local science center/observatory.) Hmm...

I have a moon globe that I got when I was a kid ... probably in the early 60s. I have no idea where I got it, but it may have been from the Science Service, a subscription-based publishing group that sent out young-adult oriented booklets about science every month. I wonder how it would compare to the new globe? Obviously, the new globe has more detail, but it would be fun to do a side-by-side comparison! (Not sure I wannna spend a c-note for it, though.)

I'd actually prefer a moon that was made up with just the images with a removable, keyed crystal (well...polycarbonate) dome having the labels. Sometimes you just want the Moon.

This is a great globe, but what we now need is a new 12" globe of Mars. The one I have (from Sky & Tel, I believe) is based on Viking imagery from the 70's, and there have been a lot of missions to Mars since then. I mentioned this to Bob, and they are considering it... Even cooler would be a smaller set of globes of Mercury, the moons of the outer planets, and asteroids. I haven't seen anything like this!

JS: The funny thing about Mars is that while there are good new grayscale maps, the best global color data set we currently have for a global view of Mars is still Viking's! MOC and MARCI have global color coverage but not at the same resolution. Still, a better Mars globe could now be made with one of the new grayscale datasets (like THEMIS) colorized with Viking.