A solar eclipse isn't just a spiffy sight to Earthlings; it looks pretty cool to lunar dwellers as well. Lunar Reconnaissance Orbiter, at home at the Moon, performed a really difficult feat during last weekend's solar eclipse, catching a glimpse of the not-quite-completely-dark shadow of the Moon falling on Earth's disk. The view below is actually just one of four pictures that the lunar orbiter managed to catch. 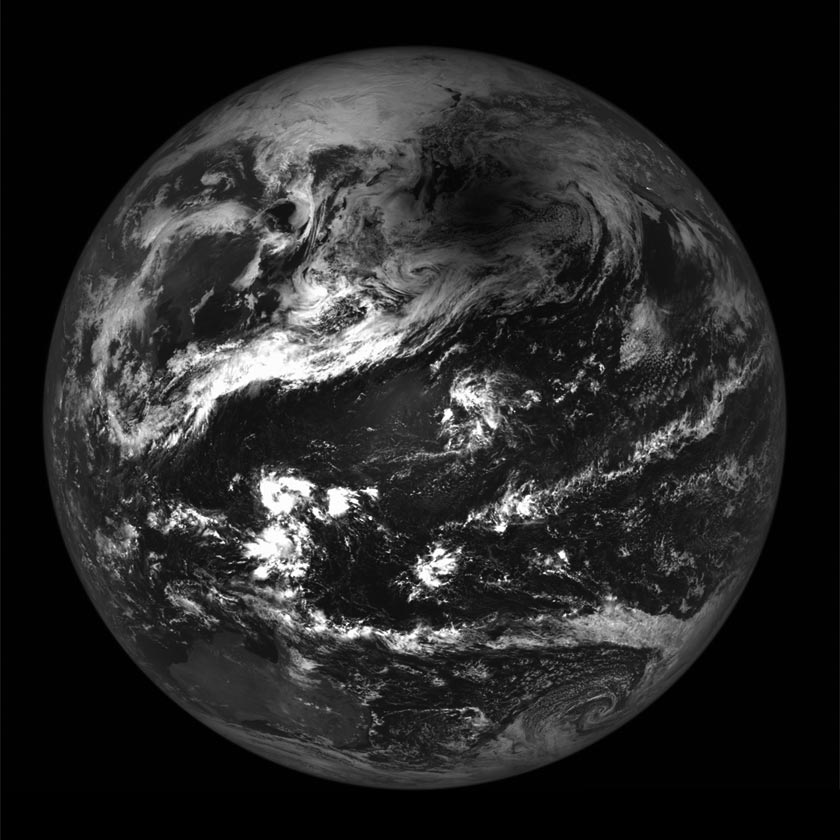 As the Lunar Reconnaissance Orbiter team explained on their website, this was a more difficult feat than you might imagine. Lunar Reconnaissance Orbiter's main camera, like many others, is a pushbroom-style camera. Unlike framing cameras (which are what you probably think of when you think of a camera -- click and the shutter snaps open and shut, exposing a rectangular detector), pushbroom cameras have a linear detector array that takes advantage of the spacecraft's orbital motion, sweeping down along the orbiter's ground track, building up long skinny noodles of images.

So if you want to turn around and take a photo of Earth, it's very hard, because your view of Earth doesn't sweep by at anything like the same rate that the view of the lunar surface does from your low lunar orbit. To get a "photo" of Earth, they had to point in Earth's direction, then spin the spacecraft as fast as they could while the Earth swept by in order to make the apparent rate of Earth's motion produce a sensible image within the camera's pushbroom-style detector.  They tried four times; the image above was the best of the four. The others were also very good, but didn't quite catch all of Earth in the skinny image noodle.

I'll end with a programming note: I just got back from a quick family vacation, and am facing a crazy week that includes a tour of Virgin Galactic's facilities in the Mojave tomorrow and an appearance at Spacefest in Arizona next weekend (for which I really should start preparing my talk, yikes).  So I apologize in advance for what's likely to be a low number of posts this week!

Quick question: If the dark spot on this picture of Earth is presumably the Moon's shadow on the Earth with the Sun behind the "picture taker", then why isn't the rest of the Earth bathing in sunlight?

The whole Earth IS illuminated! Don't you see?

re:TrekJunky comment The earth is indeed bathed in sunlight, but as the clouds reflect much more sunlight than the surface (mosty water), the effective exposure most be short to avoid overexposing the clouds and the moon's shadow thereon. The surface, as a result, looks dark.