Methone, an egg in Saturn orbit?

Good things do come in small packages. Behold the Saturnian moon Methone, photographed at high resolution for the first time on May 20, 2012: 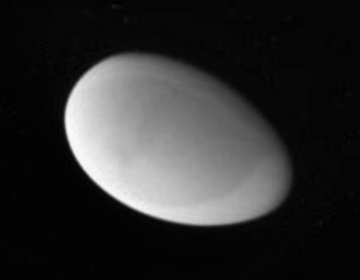 Methone is a small (3-kilometer) moon of Saturn that orbits between Mimas and Enceladus near Anthe and Pallene. Cassini captured high-resolution views of it on 20 May 2012. The moon is unusually smooth for such a small object. This version was produced from raw image data by Phil Stooke, who cleaned up cosmic ray hits, enlarged it by a factor of two, and adjusted brightness and contrast. There are clear albedo (brightness) variations across its surface.

What a funny little egg of a moon, so smooth! The bright stripe that covers the pointier end is a real feature, not just an artifact of image processing. There are subtler albedo variations across the rest of the moon, some of which may be real. The data are a bit messy, with lots of cosmic ray hits that must be painted out in order to produce a pretty view like the one Phil Stooke made above.

If you're not familiar with Methone, you're not alone; little is known about it. Methone is one of the smallest regular moons of Saturn, having a diameter of only about 3 kilometers. It was the first moon that Cassini discovered, very early in Cassini's mission at Saturn, in 2004. Other Cassini-discovered moons include Daphnis, which is within the A ring; Anthe and Pallene, which orbit very close to Methone in the space between Mimas and Enceladus; and Polydeuces, the trailing companion of Dione.

Methone is a tough target for detailed imaging from Cassini. How many pixels Cassini can get on an object depends on Cassini's proximity to it. Cassini's narrow-angle camera has an angular resolution of 0.00006 radians. For Cassini to achieve a resolution of 3 kilometers per pixel on any object, it must pass within half a million kilometers. That isn't too hard. But Methone is only 3 kilometers across, so at half a million kilometers Cassini would see no detail whatsoever. I usually consider 100 pixels to be a rough minimum for what I would call a decent picture of a world. To get 100 pixels on Methone, Cassini has to pass within 5,000 kilometers. That is really quite close

Distances in the Saturn system are large enough that it's pretty rare for Cassini to get within 5,000 kilometers of any body. But it's especially hard for Methone (and Anthe and Pallene, for that matter), because they are especially close to Saturn. They all orbit at about 200,000 kilometers from the planet. And that's about as close as Cassini gets to Saturn, at least right now. So opportunities for good imaging of these moons from Cassini can only occur during the very brief period on each orbit that Cassini is near its closest approach to Saturn -- a time when Cassini is also moving at its highest speed.

All of which is to explain why it's been almost eight years since Methone was discovered, and we've never yet had good pictures of it, until now. Like everything else seen for the first time in the Saturn system, Methone's appearance is a surprise. The thing is as smooth and round as an egg. Ordinarily, things in the solar system that are this small are not so round. Here are pictures of two asteroids visited by spacecraft whose diameters are in the same ballpark as Methone's: Steins (5 kilometers) and Gaspra (18 by 9 kilometers). They are decidedly non-round. 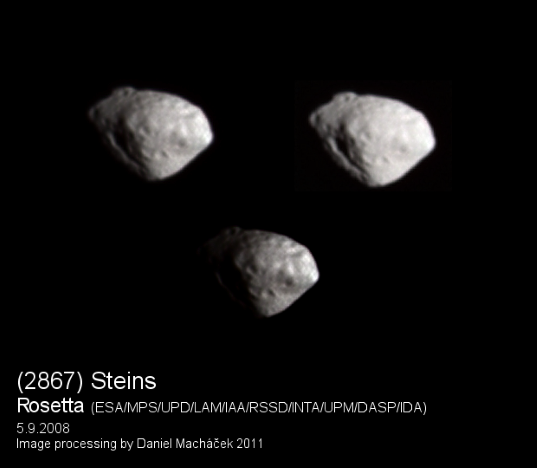 Methone is really shockingly round. Some of the other small moons that orbit near the rings have a smoothed appearance, but they all still have some craters or some topography. The smoothness probably results from these things collecting dust, a substance that there is a lot of in this part of the Saturn system, but it's kind of hard to understand what could make the dust slide around to fill every topographic low on this little world, covering it with what's essentially a global ocean of very puffy dust. I think the roundness tells us that whatever Methone is made of, that material behaves like a liquid -- it has no strength to hold any shape whatsoever. Maybe Methone is nothing but a big ball of dust. I wonder what it would be like up close? I'm trying to imagine it. I have no idea if this is realistic, but I'm imagining that if I approached it relatively slowly (at kilometers per hour rather than kilometers per second speed), my momentum might carry me right into and even through the moon. It'd be like encountering an orbiting dust storm rather than like landing on something solid.

Methone is undeniably round. If it were orbiting the Sun independently of Saturn, would it qualify for planethood? Certainly not, because it would fail the gravitational-sway test (it's too small for its gravity to exert control over any region of space). Still, it's interesting and surprising that a body so small can be so round.

This is an interesting moonlet. Is there anyway to use this image with another copy of it to make a stereo image or maybe segments of it, if other images are available to do so?

In part from NASA's article on Methone titled 'Cassini Spots Tiny Moon, Begins To Tilt Orbit' by Jia-Rui C. Cook at JPL: "... Cassini discovered Methone and two other small moons, Pallene and Anthe, between the orbits of Mimas and Enceladus between 2004 and 2007. The three tiny moons, called the Alkyonides group, are embedded in Saturn's E ring, and their surfaces are sprayed by ice particles originating from the jets of water ice, water vapor and organic compounds emanating from the south polar area of Enceladus. ..."

I think Emily has it right on the composition, basically a dust ball also now believed coated by Enceladus's water ice plume.

In re: bware's info-- So Methone could have a shell of ice! Wonder what would happen if, as Emily imagined, something cracked it. Wacky, is right! :-)

I like the way you wrote this article including imagining your journey to and through it.

I wonder if the absence of craters is a function of 1) the newness of the moon--not enough time to have been hit; or 2) its tiny size making it a harder target to hit; or 3) its tiny size and therefore relatively tiny ~weight~ making it easier to turn if struck, as opposed to sustaining breakage.

I see two craters, very faintly outlined, on the object. One just right of center and just below the upper limb; the other is just below and slightly left of the first. Contrast manipulation makes them a little easier to see. Their edges are very rounded, making me think that they have indeed been covered with dust or other fine-grained material.