One of my fondest memories is of a solar eclipse on spring day near the end of my sophomore year in college, May 14, 1994. The long winter had only just given way to spring, and I remember the feel of the soft warm breeze and gold Sun on skin that had been covered in sleeves and pant legs all winter long. Walking up the hill from the campus center toward the geology building, I came across a hive of activity in the plaza in front of the science building. They had some kind of setup -- I don't remember the specifics -- that projected an image of the Sun on a large white board, and it was only then that I learned of the eclipse happening that day. I stayed to watch its slow progress for a while, until it was near its maximum, then had to walk on. As I walked, my eyes were riveted not to the sky, but to the ground. Everywhere, lying underneath trees just sprouting bright green spring foliage, the dapples in their shade had the crescent shape of the eclipsed Sun. Although I understood the physics behind this phenomenon, it seemed at the same time like some kind of faerie magic, an enchanted spring brought to a winter land. I savored those crescent dapples as long as they lasted.

In a few days, I'll finally have a chance to see that magic return. A solar eclipse is coming up, on Sunday evening for those of us in North America, Monday morning for you in north and eastern Asia. Lucky people in southern Japan (including Tokyo) and residents of a strip of land from northern California through central Nevada, southern Utah, and northern Arizona will see an annular eclipse, with the Moon poised in the center of the Sun, leaving a broad ring of Sun showing. The rest of us will see the Sun as a crescent.

Sharing the eclipse with your kids

I'll begin with the obligatory warning: for safety reasons, don't look directly at the Sun at any time during the eclipse. You know how you can use a magnifying glass in the Sun to set things on fire? Your eye has a lens, too, and can focus the Sun's rays on your retinas and seriously damage them. I've saved a couple of pairs of eclipse-viewing shades clipped from old issues of Astronomy magazine, which I'll be using to look at the Sun. But if you don't have eclipse-viewing glasses or some other way of screening out most of the Sun's light -- or if you don't have enough to go around a large group of kids -- how can you enjoy the eclipse?

Here's how I plan to do it: using a pinhole viewer. When you use a pinhole viewer, you (and your kids) are actually facing away from the Sun, so it's totally safe. You'll find lots of designs online for elaborate pinhole viewing devices, but here is something super easy that you can do with your kid -- in fact, your child can do it by herself.  All you need is two stiff cards (index cards, business cards, whatever) and something to poke a hole with.

With your kids, practice using your viewer before the day of the eclipse, ideally at the same time of day as the eclipse, so you know where to position yourself.

Use a pin to poke a tiny hole in the middle of one card. You can widen it just a little -- I use a large needle for this -- but it's not necessary. Take care not to rip the card; you want the hole to be as perfectly circular and sharp-edged as possible.

Now go outside and find your shadow. Stand facing away from the Sun, in some place where you can see your head cast a sharp shadow. Hold the card with the hole next to your head so that you can see the shadow of the card next to your head. With your other hand, put the second card in the shadow of the first card, and you should see a tiny image of the Sun on the second card. (Scroll down to see a picture of my daughter with her two cards.)

Now, experiment! Pull the second card closer to you and farther away. What happens to the image of the Sun?

Try punching more holes of different sizes. What happens to the image of the Sun? What do you think is the best size? What happens if your hole isn't circular?

Now you're ready for eclipse day. You can find local circumstances (times) for the eclipse on this PDF; the times will be different depending on your longitude.

As the eclipse starts, your pinhole-projected image of the Sun will start to show an increasingly large bite taken out of it. If you want to record data, draw a picture of the Sun as it looks on your pinhole viewer every once in a while. If you want to be rigorous, pick a schedule (every 10 minutes? every 15 minutes?) and record the Sun's appearance at those times.

When you're not using your pinhole viewer, walk around and look for natural pinholes.  My favorite, as I mentioned before, are the dappled shade under trees, but you might find other objects whose shadows look funny during the eclipse. During the eclipse, the dapples will become crescent-shaped. You can have your kids do a photo safari, finding weird-looking shadows everywhere.

You can play with this with your pinhole viewer, too. Today I had my kids prepare ahead, writing their names on cards and then using a pushpin to poke holes, spaced about 1/8 inch (3 or 4 mm) apart. 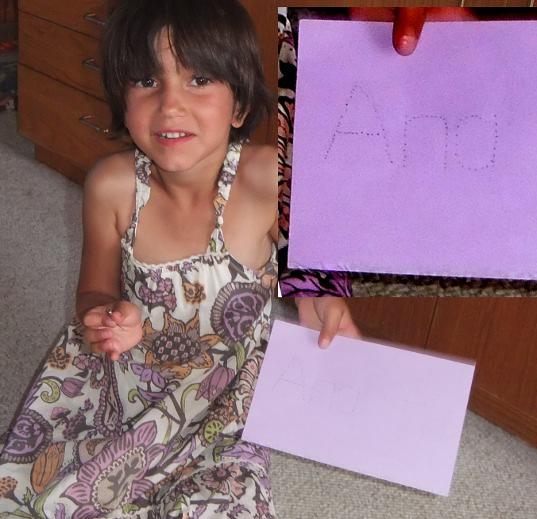 Observing an eclipse with your kids. 1: Anahita drew her name on a stiff card and is now punching it every few millimeters with a pin.

We checked what the solar name plates looked like today. What will they look like on Sunday? 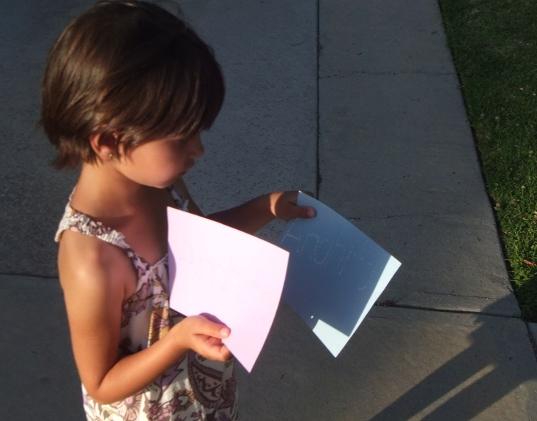 Making a nameplate with images of the Sun

Observing an eclipse with your kids. 2: Anahita stands with the Sun at her back and holds the card with her name so that it projects images of the Sun on a second card. 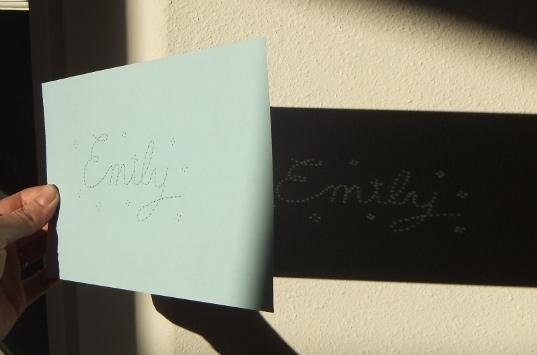 It even works inside the house

At the same time of day as the May 20, 2012 eclipse, a sunbeam in my house allows me to view the Sun through a pinhole imager on a blank wall.

You are in company with paleontologist Stephen Jay Gould who also has fond memories of spending that eclipse in NYC. Google "Happy thoughts on a Sunny Day in New York City" for an essay he wrote on that very eclipse and the wonder of experiencing nature first hand. Google Books link: http://books.google.com/books?id=gaEGNJJnaWEC&pg=PA3&lpg=PA3&dq=%22Happy+Thoughts+on+a+Sunny+Day+in+New+York+City%22&source=bl&ots=ymWMgfEBja&sig=ieZ_82nOZtnlg5ahiyIULTDROTQ&hl=en&sa=X&ei=xjm1T7rCDIS88ATGs_wB&ved=0CFgQ6AEwAg#v=onepage&q=%22Happy%20Thoughts%20on%20a%20Sunny%20Day%20in%20New%20York%20City%22&f=false Although he notes the date as being May 10th.

Wow! What a fun way to teach our kids about eclipses. It'll be fun to create something more permanent for the kids to remember the occasion. Name plates anyone?