Rovers in the desert

Sometimes it seems like engineers are just like kids except that their toys are bigger and more expensive.  Last week, I had a chance to watch some overgrown kids playing in a sandbox with toy cars.  Which is to say, I drove out to the California desert for a brief chance to watch the testing of some model Mars rovers on sand dunes.

There were two rovers being tested, stripped-down versions of the rover that's on Mars and the one that's on its way.  In the foreground here is the "Scarecrow," the lightweight model of the Curiosity rover; in the background is "SSTB-Lite," the model of the Mars Exploration Rovers.  They are stripped down to their essential driving components -- wheels, chassis, motors -- in order to reduce their weight to match the weight that the real rovers have on Mars, where the gravity is only 38% that of Earth's. 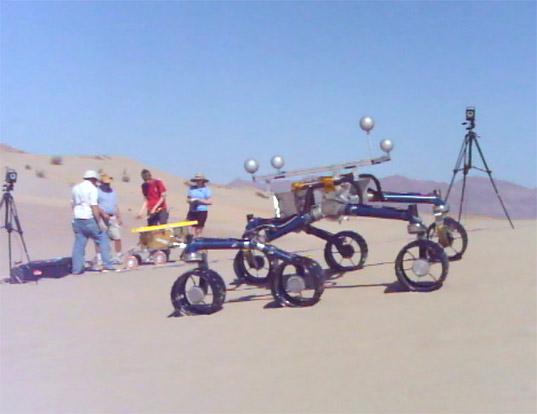 The "lite" versions of both Curiosity and Mars Exploration Rovers on a sand dune in Dumont Dunes Off-Highway Vehicle Area, north of Baker, California.

When I arrived, the Scarecrow was tracking slowly up the back of a sand dune. being watched by the same kind of 3D motion-capture system that they use in Hollywood to turn live actors into cartoon characters and superheroes.  All the photos I took of the Scarecrow make it seem like a child's toy; Doug Ellison explained to me that's because the windblown sand has the effect of making the background seem out-of-focus as in a closeup photo with shallow depth of field. But all the engineers and scientists were gathered around SSTB-Lite as it drove up and then backed down the dune.  The difference between uphill driving and downhill driving was quite obvious; the rover's uphill motion was much slower than the downhill motion.  Now, these rovers do not "coast" -- their wheels do not spin freely. The rover was spinning its wheels at exactly the same slow rate in uphill and downhill tests. The difference in ground speed had to do with slip.  Going uphill, the sand shifted out from underneath the rolling wheels, slowing its progress.  Downhill, the shifting sand carried the rover with it, speeding its motion. Being able to predict exactly how much slip is going to happen is crucial for accurate positioning of the rover. If you're driving a long distance across sand and want to wind up with a specific rock within reach of the robotic arm, you have to predict this accurately. In practice, traversing sand makes perfect prediction impossible, so the rover drivers usually plan to stop short and then "bump" to a position from which they can do science on the next day's drive.

Pardon the unsteadiness of this video; it was very windy and I'd forgotten a crucial part for my tripod! The guy in the cowboy hat at the uphill end of the tape measure is Ray Arvidson, Depupty Principal Investigator for the Mars Exploration Rover mission; the one who comes in halfway through the video and remarks "Boy, it's moving right downhill" is John Grotzinger, Project Scientist for Curiosity.

These tests were being performed in part as a reality check for the rover drivers. They have experience driving the Spirit and Opportunity rovers on all sorts of materials. Although the Curiosity rover is much larger than Spirit and Opportunity, it should have essentially similar behavior on different surfaces because its wheels are large enough that the ground pressure of the heavier rover is exactly balanced out. John Grotzinger remarked to me that these tests are showing that Curiosity actually appears to have better purchase on this shifting sand than her smaller sisters do, they think because the flatter curvature of her wheels winds up giving her more purchase on the ground.  Also, it seemed to me (and this is my own observation, unconfirmed by anyone more likely to know what they are talking about) that Curiosity turns more neatly than Spirit and Opportunity, because her center wheels are positioned wider than her corner wheels, making all the wheels track on roughly the same circle when she turns her corner wheels inward to turn in place.

Another reason for the tests is that Mount Sharp -- the mountain in the middle of Gale Crater, the landing site for Curiosity -- is partly ringed by sand dunes. The head of the Curiosity camera team, Mike Malin, is particularly fascinated by Mars' dunes, and is eager to explore them with the rover.  The Mars Exploration Rover mission has generally treated dunes as something to be avoided, so these tests will help the rover drivers increase their confidence about the types of terrain they can expect Curiosity to be able to handle.

Ray set off with one of the engineers to find a good, steeper slope for drive testing. I followed them, after I took a panoramic view of the landscape, which was very pretty:

As I followed them, I noticed how the dunes' apparently constant surface hid marked changes in traversability. You can see the men's footprints dug deeply into to the sand in the foreground; that area is very soft, and the rovers' wheels would slip quite a bit.  But as the slope changed, climbing up the dune, the sand suddenly stiffened, and our feet no longer sank in. I would not have guessed that, looking at the dune from a distance; it showed me how hard it can be to judge a landscape just from a distant view, and how treacherous dunes can be for a roving spacecraft.

I was curious to see if the change in dune character would be more visible in a tweaked version of the panorama. To make this version I cranked up the contrast, expanding the pixel values across the entire available range of values. I don't think I succeeded in sighting any obvious differences in the sand from place to place on the dune, but it's an interesting exercise to consider that the way this image is processed is similar to the way we usually process the rovers' images from Mars.

About half an hour after I arrived, Ray invited me to come along on a brief side trip. John Grotzinger was taking him a mile or so north, out of the dune field, to show him some very interesting rocks. As we drove, John explained some of the lithology to us. All of the nearby rocks are pretty old, as sedimentary rocks go; they're more than 600 million years old. A red mudstone is overlain by a dolomitic limestone containing stromatolites, the remains of communities of algae-like organisms.

Up close, the mudstone sometimes breaks into very fine, shaley layers, interrupted by coarser-grained layers.  The fine layers would have formed from the slow settlement of fine particles out of water filling a basin. The coarser layers would have formed when an occasional underwater mudslide transported large amounts of sediment for long distances across the basin bottom.  Once in a while, though, there's a strange interloper in the fine mud. Here's one: See that white squarish rock? I forgot to put in anything to show the scale, but it's about the size of my fist. Notice how the fine layers below it are pushed down, while layers appear to wrap on top of it.  This stone wasn't brought in at the same time as the mud; it fell into the water and landed on the mud while it was still soft, and then more mud was slowly deposited on top of it. How does a stone get all the way out into the quiet part of a basin where it can splat onto fine soft mud layers? There were no African Swallows living at this time; it was carried by some nonliving mechanism. The most likely one is that it was carried out to the middle of the basin inside an iceberg that, upon melting, dropped the stone in place. This isn't the only dropstone; here's some more. And here's a particularly big one, with me for scale. John explained to me and Ray that these dropstones are wacky because they formed in a location tropical enough for limestone rocks to occur both above and below these mud layers. So they are some of the evidence for the arguments in favor of what's popularly known as the "Snowball Earth" hypothesis, the notion that Earth was, at some time (or times) in the past, frozen over from pole to pole. These rocks may well have formed in a climate that held sway over Mars at the time that Mount Sharp's sediments were first settling out of an ice-covered Martian ocean. Or not. That's what we're going to Mars to check out! Looks like fun. Unfortuanatly I could not hear anything anyone said in the videos because of the wind noise. I think you need a different kind of microphone.

It's not the mic. All you need to do is keep your back to the wind and the mic right next to your lips when you speak. Was any more video taken of the wheel traction up & downhill? Has anyone tried to test bed a solar cell tube rove frame with 4, one meter high solar cell tubes at each platform corner. That should be able to shorten winter parking time if not entirely eliminate it, site dependent.

update: Has anyone tried to test bed a solar cell tube rover frame with 4, one meter high solar cell tubes at each platform corner. That should be able to shorten winter parking time if not entirely eliminate it, site dependent. The bedframe could be raised 1/2 meter above the tube frame to allow low sun angle light to be collected under the bedframe. The 4 corner poles would be collecting above obstructions.

I guess I should have made it clearer that I had no real intention of anybody being able to hear anything -- I was just shooting with a pocket camera. Even the professionals were having trouble with wind noise that day. I figured that even if the sound was messed up, the videos were still interesting. bware: Curiosity is not solar powered, it's RTG powered.

Hi Emily... Thanks for the clear up on the wind. I had responded to the previous blog about that with "trick" experience from my radio days. Yes I know MSL is RTG'd. I was thinking about other power designs since some are opposed to RTG. I'm not opposed to RTG. It's a necessity at certain points. I like the work you are doing also. It's first rate! keep having fun with it!