Okay, so the Soyuz isn't real, but it's as lifelike a replica as one could ask a television studio to make, and the astronaut is real: it's Mike Massimino, who served on two of the Hubble Servicing Missions. As the nerds say: squee! 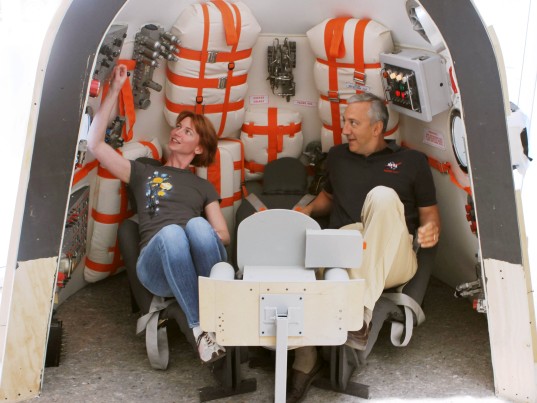 Can you turn on the fan, please?

"Hubble Repairman" Mike Massimino with Emily Lakdawalla in a Souyz mockup built for the fifth season finale episode of the Big Bang Theory. Photo taken May 4, 2012.

This photo op came about because I was invited by Warner Brothers to a screening of the fifth season finale of the CBS comedy The Big Bang Theory, after which there was a question-and-answer session with the show's co-creator/executive producer Bill Prady; one of the show's stars (Simon Helberg, who plays the character Howard Wolowitz); and Mike Massimino, who guest-starred in the episode. An uncredited guest star is that very fine Soyuz mockup, which is currently through Mary 17 on display at the Paley Center in Beverly Hills, if you'd like to see it for yourself! Here's the teaser for the episode:

The Countdown Reflection (Thursday, May 10th at 8:00 – 8:30 p.m.) – When Howard and Bernadette decide they want to be married before his NASA launch, the gang rushes to put on a wedding, on the fifth season finale of THE BIG BANG THEORY, Thursday, May 10 (8:00-8:31 PM, ET/PT) on the CBS Television Network. NASA astronaut Mike Massimino guest stars as himself. Full disclosure: I don't watch much TV and have only seen a couple of episodes of The Big Bang Theory before. But I've read a lot of other bloggers' remarks on the show and know that they work very hard -- within the tight constraints imposed by being a weekly television show -- to be as scientifically accurate as possible. This particular episode opened with Howard strapped in to a Soyuz capsule as a Payload Specialist, accompanying a telescope he had designed for installation on the Space Station. With Howard were a cosmonaut and an astronaut (Massimino). This wasn't one of those celebrity cameos where they have one line and never show up again; the episode repeatedly cut away from and returned to the Soyuz scene, with the astronauts bantering with each other and poking fun at the utterly terrified Howard. Massimino was very funny -- the episode gets a thumbs up from me!

During the Q and A session afterward, it was clear that I was the only space blogger in the room (I was told later that Warner Brothers had asked "NASA" for a list of local people who might be interested in the event, and I guess I was the only one on that list who replied to the invitation). The first half dozen questions concerned the episode's plot line, the show's characters, and what would happen on the next season. Finally Prady said something to the effect of: "hey guys, I'd like to point out that there's a person on this stage who has actually been to space." I took that as my opening to ask a few questions.

Massimino talked about the studio's Soyuz mockup ("realistic") and about the scripted banter inside the capsule. It was very realistic, he said, a lot like the chatter that happens inside the cockpit at an actual launch. In fact, he said, suiting up in the space suit costume to film the episode gave him flashbacks to his own launches. He hoped that, now that the construction of the Space Station is complete, that more payload specialists like the Howard character really would be launching to orbit to install and operate their own scientific equipment.

Massimino served on two Hubble servicing missions, and I asked him if the telescope looked different the second time than it did the first. Not really, he said. His main impression of Hubble: it's very shiny. You get up close, though, and you see tons of little scars from micrometeorite impacts. I told him I'd seen WFPC2 when it was on display at JPL -- this is the piano-sized camera instrument he removed and replaced with WFC3 -- and he remarked about the impact craters you can see all over its radiator, the part that was exposed to space.

I asked him if he could go to any of the destinations currently under discussion for future human exploration, which would he, personally, choose? (I made it clear that he was not speaking for NASA, only for himself.) He said, given the choice, he'd like to go to the Moon. Not to Mars; he said it didn't make sense to him to try to take that big step yet, until we'd gotten comfortable with living and working in space someplace closer. I asked if he'd want to return to the Apollo sites or to explore some place new, and he said: both!

Anyway, I wanted to thank Warner Brothers and the anonymous NASA representative who suggested I be invited. It was a pleasure and an honor to meet the Hubble Repairman, and an enjoyable show too. Watch tomorrow night!

If you are interested in how a Soyuz capsule looks like up close, have a look at the photos I took a few years ago when the Soyuz TM-14 reentry module was temporarily on display in my city: http://www.flickr.com/photos/pamoroso/collections/72157609858057368/

Big Mike was always a lot of fun to watch and listen to, whether in orbit or conducting video tours. No surprise to me he was a hit on TV.