Welcome to my monthly roundup of the activities of our intrepid robotic emissaries across the solar system! I count 16 spacecraft that are actively performing 13 scientific missions at Mercury, Venus, the Moon, Mars, Vesta, Saturn, and at the edge of the heliosphere, while another 9 are cruising to future destinations. And my count doesn't include all the spacecraft observing Earth, Sun, and points beyond our Sun's reach.

So, what highlights do we have to look forward to in May 2012? Cassini's continuing its close encounters with the icy moons, with flybys of Enceladus and Dione tomorrow. The Curiosity rover is closing in on Mars; only 100 days remain until its landing. And in late-breaking news (that is, about 12 hours after I originally posted this), Dawn has just departed its Low-Altitude Mapping Orbit, and is now spiraling up toward High-Altitude Mapping Orbit 2. Most of the rest of the scientific spacecraft I'm following are doing their routine-yet-amazing work of gathering data from far-flung planets and relaying it all back to Earth.  I'll get to much more detailed summaries of each mission's activities, but first, here's Olaf Frohn's diagram of where all our wandering spacecraft are as of April 1. Compare it to last month's to see how things have moved. 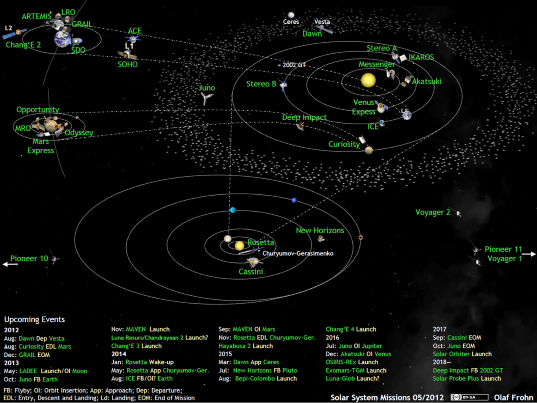 A widescreen version of this diagram suitable for presentations is available here.

NASA's MESSENGER Mercury orbiter announced has completed the adjustment of its orbit from its former 12-hour period to a faster, lower 8-hour one, giving them much more time close to the planet for their fields and particles instruments to gather data on the composition of the planet and its atmosphere, the structure of the magnetic and gravity fields, and the shape of its interior. They announced last month that the International Astronomical Union had approved 23 more names for Mercury craters mapped by MESSENGER. Mercury's craters are named for artists, musicians, and other culturally important persons. The current group includes craters named for Dr. Seuss and Duke Ellington, among others. Checking out their image gallery, I notice that they posted a nice mosaic covering Mercury's huge Caloris basin with its wacky tectonic features.

ESA's Venus Express Venus orbiter remains in orbit on a mission that has been extended through 2014. After a long hiatus, ESA has resumed posting mission updates to the Venus Express Science & Technology site. These updates are extremely detailed and worth reading for the insight they provide into routine operations on an orbiting mission.

NASA's ARTEMIS spacecraft are presumably still orbiting the Moon, but there's no recent mission status information available. They were sent into lunar orbit in 2011 to study the Moon's magnetic field, and should last for at least seven years.

China's Chang'E 2 lunar orbiter is now at L2, the Lagrange point on the far side of Earth from the Sun, having arrived there in August 2011. According to this Xinhua article, the plan is for it to stay there for a year. I'm eager to receive more information on the status of this mission!

NASA's Lunar Reconnaissance Orbiter is busily mapping the Moon from its science orbit, producing insane quantities of data (their latest data release, issued on March 16, includes 9.6 Terabytes of raw data and brings their image total to 667,572). There's a big citizen science project called Moon Mappers that is asking the public's help to map craters within those images.  This month they've got a Million Crater Challenge going; there's only 4 days left to reach 1 million craters mapped, so go help them out!  Browsing the Lunar Reconnaissance Orbiter photo gallery is always rewarding; these scale-like impact melt sheets are very cool-looking.

Out at Mars, today is the southern winter solstice. (It's currently Ls 104.5 of Mars Year 31.) The Mars Exploration Rover Opportunity's sol 2940 is just beginning. We're now past the winter solstice, so Opportunity's power levels are picking up (her panels are producing 366 watt-hours, 60 more than last month). The power situation is also being helped along with small "cleaning events," gusts of wind blowing some dust off the solar panels.  Every little bit helps!  They're still parked at the north edge of Cape York on the rim of Endeavour crater, keeping still in order to perform careful radio tracking of the rover's position, an operation that should allow them to determine whether Mars has a liquid outer core like Earth's. Here is Eduardo Tesheiner's latest route map and Google Earth kml file for Opportunity (four months old now).

ESA's Mars Express is carrying on with an extended mission, planned to run through 2014. They announced this month the publication of a new gravity map for the Tharsis volcanic province of Mars, reporting intriguing differences among the four big volcanoes there (Olympus, Arsia, Pavonis, and Ascraeus Montes).

NASA's Mars Reconnaissance Orbiter is keeping an eye on Mars' weather with MARCI. MARCI's currently recording "serene" weather, with a belt of water ice clouds, as is usual for this time of Mars' year. As always, check in on the latest captioned image releases from HiRISE for your dose of spectacular photos, and make sure you follow the links at least as far as the browse versions of the images, because the thumbnails that are automatically posted with their voluminous image releases routinely fail to convey the awesomeness hidden in each photo. Enlarge this one, showing incredible folded sedimentary layers.

NASA's Mars Odyssey is now the longest-lived spacecraft ever to operate at Mars. You can see the latest from its THEMIS instrument here. Here's a nifty photo of a summer storm front advancing across Mars' northern polar terrain.

The NASA-ESA-ASI Cassini Saturn orbiter is now halfway through its Rev 165. Cassini has one last very close flyby of Enceladus tomorrow, which should produce some very fine images (stay tuned to the raw images website for those), after which it'll pass close by Dione as well.  Later in the month, a targeted flyby of Titan will swing it onto an orbit that'll take it up out of the ring plane for the first time in a long time, beginning a new, inclined phase of Cassini's extended-extended mission.  To see what Cassini's doing when, check out my long and detailed page on Cassini's tour of the Saturn system, and look to the Looking Ahead page for more detailed information.

NASA's New Horizons has 9.35 AU to go to reach Pluto. Via Twitter comes the news that New Horizons is awake this month and next for an "Active Checkout" that'll also feature the first in-flight rehearsal of the Pluto encounter.  There are 1168 days left until Pluto closest approach. New Horizons is on course for a January to July 2015 encounter with the Pluto and Charon system. Cosmoquest has recently started a new citizen science project, the successor to IceHunters, called Ice Investigators. The goal is still to discover a good Kuiper belt target for the New Horizons mission.

NASA's next great Mars rover, Curiosity, or Mars Science Laboratory, is now 34 million kilometers from Mars and closing. A recent status report notes that fewer than 100 days remain until landing. Curiosity will be landing in Gale crater, next to a mountain that's recently been (informally) named Mount Sharp, on August 6, 2012, just after 5:00 UTC (August 5, after 10:00 p.m. here in Los Angeles). On Mars, it will be in the mid-afternoon of a late winter day in the southern hemisphere at the landing site at 4.49°S, 137.42°E. Its nominal mission will last one year but it should go on much longer. On Earth, the Planetary Society will be hosting a huge Planetfest event, gathering thousands of space fans to celebrate this momentous event together!

JAXA's IKAROS is now hibernating. It has nearly exhausted its maneuvering fuel, so can no longer maintain a minimum solar incidence angle on its solar cells, reducing available power. It was last heard from on December 24, 2011.