The twin GRAIL spacecraft are nearly at the end of their three-month cruises to the Moon. On New Year's Eve at 21:21 UTC, GRAIL-A will enter orbit, and GRAIL-B will follow on New Year's Day at 22:05. Each will fire its main engine for about 40 minutes to enter an 11.5-hour elliptical orbit. The mission expects to announce the status of each spacecraft about an hour after orbit insertion. Only when both are safely in orbit will the mission be ready to reveal the spacecraft's new names (though it actually wasn't made clear during today's press briefing whether the names announcement would actually be made on New Year's Day).

It will take both craft about two months to spiral down to their science orbits at 50 kilometers above the Moon's surface, when GRAIL-B will orbit ahead of GRAIL-A in tight formation. By transmitting and receiving radio signals produced by ultrastable oscillators, and timing the transmissions to measure the separation between the two craft to a precision of "a few tenths of a micron," they'll map the gravity field of the Moon with unprecedented detail. That, coupled with the latest maps of lunar topography from Lunar Reconnaissance Orbiter's laser altimeter and cameras, will allow scientists to measure the structure of the Moon beneath its surface.

This was all discussed at a press briefing today, and none of it was news -- it's all been the plan for GRAIL for a long time. But, unlike most of these pre-arrival press briefings, there was actually some big news: that they're proposing an extended mission for GRAIL, and (if it's funded and the spacecraft are healthy, et cetera), it's going to be awesome.

Most NASA missions that successfully arrive at their destinations get extended missions. For GRAIL, though, I've always heard that an extension isn't possible. That's because the Moon experiences eclipses twice a year as it passes through Earth's shadow. When the Moon gets eclipsed, so, too, do spacecraft orbiting it. Big missions with big budgets and big batteries can survive through eclipses just fine (with appropriate care). But GRAIL is a small mission, split into two even smaller spacecraft, and there was no design requirement that they be capable of lasting through the deep cold and loss of solar power that result from an eclipse. So the story has always been that GRAIL will enter orbit in March and die in June at the next lunar eclipse.

Now that they've launched and been checked out in space, though, it's been established that the performance of the solar panels and batteries is good enough that the mission can expect both spacecraft to survive an eclipse. In all likelihood, they probably expected this would be the case before launch. But it's usually not considered kosher to talk about an extended mission even before you've launched on your primary mission. In particular, you aren't supposed to spend more money than necessary to assure the success of the primary mission, and just planning for an extended mission requires money, never mind designing the spacecraft to be more robust than necessary in order to survive past the primary mission.

Anyway, they are now talking pretty confidently about (if all goes well, et cetera) an extended mission for GRAIL that would begin after the June eclipse and last through most of December 2012. At first, the spacecraft's orbits would be raised to 300 kilometers, in part to help with eclipse survival. Then, in order to continue the mission, the two spacecraft will need to trade places in orbit, with the back one moving to the front and the front one moving to the back, for geometric reasons; the Sun will be on the other side of the spacecraft's orbit, so the panels will need to be rotated in that direction, which flips the orientation of the instruments 180 degrees, thus the need for the swap. Then they'll lower the orbits down past 50 kilometers to around 25 kilometers. Now, keep in mind that lunar topography from the lowest lows to the highest highs spans about 20 kilometers of vertical relief. So at some extremely high spots, the GRAIL twins will be only about 15,000 meters above the surface of the Moon. That's not a lot higher than a passenger airplane's cruising altitude. Exciting!

Why fly so low? The lower the GRAILs go, the more sensitive they are to variations in the gravity field over short distances. At the nominal altitude of 50 kilometers, GRAIL will be able to develop gravity profiles over complex craters, things with central peaks, to understand the structure of the crust beneath them. But if they get down to 25 kilometers, they'll be able to do profiles across smaller craters, even down to the size (about 15 kilometers) where craters have a simple bowl shape, no terraced walls or central peaks. As anyone who has ever taken a physics class knows, physicists love it when you can simplify a problem. ("Assume a spherical cow of uniform density in a vacuum.") Measuring the structure of these simplest of craters will help them establish a better understanding of the simplest type of crater, which will help them understand the larger and more complex ones. That's a really big deal, in my opinion, and it makes me very excited about the results of GRAIL's extended mission. 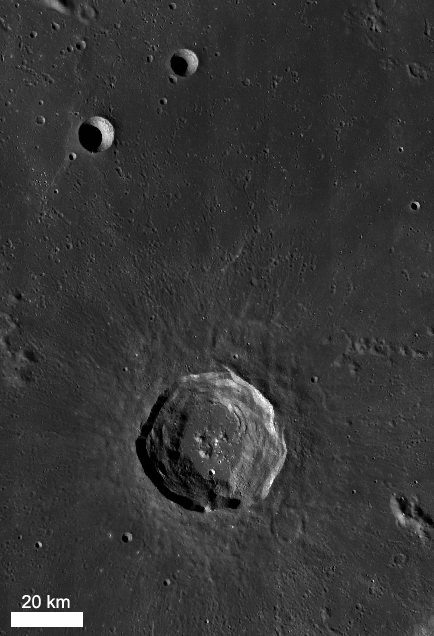 The Moon's Harpalus crater, in a photo from Lunar Reconnaissance Orbiter.

The results, though, aren't going to come immediately. Understanding gravity data is fiddly work, and GRAIL's measurements are an improvement on a type of data set that has been taken before, although at much lower resolution. The easy work has already been done, so it'll probably be years after the mission is over before we'll get the real scientific payoff. Fortunately for those of us who are impatient, the GRAIL mission added onto the spacecraft a camera whose purpose is public outreach, whose data will be made available pretty quickly. It's called MoonKam and Maria said that more than 2100 classrooms have already signed up to request imaging opportunities. She said there were a few hundred more spots available for MoonKam users in the primary mission. I asked whether MoonKam would still be able to work at the lower, extended-mission altitude, and she said that it looked like it would, and they're beginning to prepare to offer MoonKam opportunities during an extended mission.

There won't be a second extension, because there will not be enough fuel left to perform the spacecraft do-si-do a second time. GRAIL, like all tightly orbiting lunar missions, will die not long after the end of the mission by crashing into the lunar surface. I asked whether there are plans yet to observe this, and Maria said she didn't know of any, but also said that she "wasn't allowed to think about that," meaning that it's not her mission's problem. Presumably the Lunar Reconnaissance Orbiter team will at least ask the question of whether they can observe it at all. And if the impact is likely to happen on the near side of the Moon, I'm sure there will be a global campaign for ground-based observers to attempt to see it.