There's an exciting story circulating today: A large team of researchers has announced in a Nature article the discovery of not one, but two, Earth-sized planets orbiting a star named Kepler-20. Previously, the smallest-reported exoplanet was 1.42 times the diameter of Earth (and therefore 2.9 times its volume). Today's announcement is about two planets having diameters of approximately 103% and 95% of Earth's, give or take 10% -- practically the same size as Earth and Venus. But they orbit so close to their stars that it's probably hot enough to melt glass on the surface of the smaller one, so these are definitely not Earth's twins.

I was happy today to be invited to participate in a Google+ Hangout with Fraser Cain and Nancy Atkinson of Universe Today, as well as Phil Plait (the Bad Astronomer) and MSNBC space journalist Alan Boyle. I had technical difficulties but finally managed to join about 40 minutes into the show. It was fun, and I hope to do it again!

As usual, I'm far from the first to comment on this story, but I'll try to compensate by being thorough and actually reading the paper rather than just the press release. In all scientific papers you have data (observations) and lots of detailed interpretations and often a concluding paragraph of speculation. With these exoplanet detections, there is very good data on their diameters and their orbital parameters. But when it comes to actually describing what these planets are like, there is an awful long chain of interpretations from interpretations from interpretations. I thought it'd be useful for you readers if I separated the observational facts from the quite-likely-to-be-true inferences from the downstream speculations.

These facts are nicely summarized in a set of diagrams provided by the Kepler mission (many thanks to the Bad Astronomer for pointing these out to me):

OK, now let's move on to the inferences we can be somewhat to reasonably confident about.

So we can be pretty certain that these two signals in the Kepler data do result from the presence of two planets with diameters very close to Earth. Here's an artist's concept of the sizes of these two putative planets compared to Earth and Venus. Remember that the diameters reported here are uncertain by 8-10%. 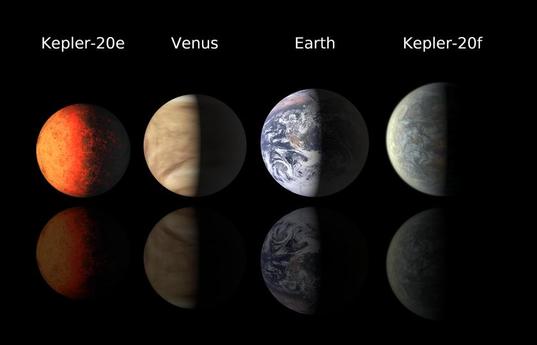 An artist's concept of the smallest two of five planets suspected to orbit the star Kepler-20, compared to Earth and Venus. These two planets orbit very close to their star so would be much hotter than Earth and Venus. Their diameters are about 87% and 103% that of Earth, give or take 10%.

Now it's time for the speculation, which is found only the very last paragraph of the paper and in a table summarizing the predictions of the planets' physical properties:

I love the speculation part of these papers, because they serve as nutritious food for the imagination. Exoplanet science is especially delicious; there are so very many kinds of alien worlds out there, and it's fun to imagine traveling to them or to imagine what sort of life might exist on any of these crazy planets or their moons. But the speculative parts of any scientific paper are hazardous because they're usually the most fun to write about, yet are the most likely sections of a paper to turn out to be wrong. Keep that in mind when you read stories about these Earth-sized planets!

I know this is an old thread but I went hunting for someplace to check my thinking… If Kepler was turned into an all-sky survey how many planets would it find? My own figurings… The primary Kepler mission looked at 115°(sq) of sky. The whole sky is 41253°(sq). Kepler found some 2000 planets confirmed and over 4000 unconfirmed as of this month not counting K2. Certainly stars are not evenly distributed in the sky - I see an estimate that the Milky Way blocks about 20% of the sky from deep sky surveys. So 20% of 41300°(sq) is about 8000°(sq). That’s a region of sky at roughly the same density of stars as the K1 mission of Kepler, this would contribute around (8000/115) 70 times as many stars as K1 - around 140k planets confirmed at the same level of processing and another 280k that need more time to sift. This is rough but not off by a power of 2 or so? Plus the rest of the sky, excluding other galaxies (I believe individual stars Andromeda are identified but its in the dozens of stars range and only giants - the Magellanic Clouds would be special cases,) could very roughly contribute some 20k planets(.8*41300/115/100, for 100 times fewer stars in the sky away from the MW.) So in a decade we should be talking about approaching a database of a quarter-million planets!. It’ll be a different time for sure. A circumpolar survey should have a chance of finding some - about 3k planets?! I know of the Gaia satellite. It isn’t designed to do short images and collections of history like that - though perhaps (I hope) after their initial survey people look at retooling the software for that kind of approach. I see a paper ( https://arxiv.org/abs/1411.1173 ) projecting identifying 70k planets to be found but recent info says it won’t help in many interesting cases like earth-like situations (https://arxiv.org/pdf/1709.00290.pdf ) It is certain to be a great compliment to the Kepler/occultation detection scheme of course.