I got a fun email from one of my former students, Abigail Fraeman, this morning. She said: "Every week the Washington Post runs a contest called the Style Invitational which usually asks entrants to come up with some sort of witty word play in response to a specific prompt. This week's contest was to make a diorama out of food depicting an event of the 21st century in a humorous manner. The winners were announced this morning and my entry, the MallowMars Rover, took third place!:D" 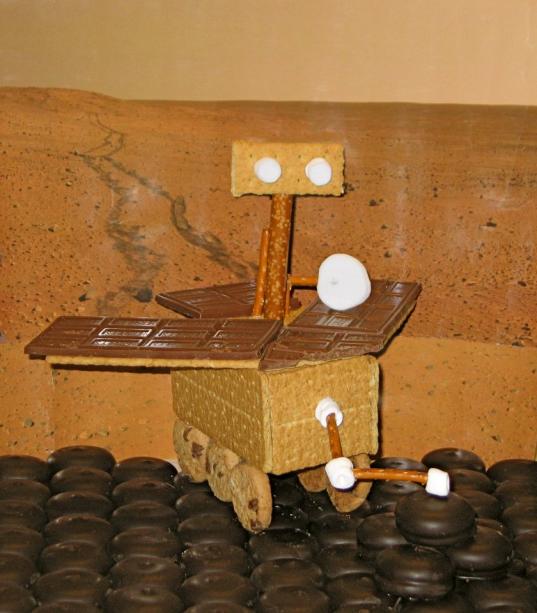 Abigail Fraeman took third place in the Washington Post's 2011 Style Invitational edible-art contest. The Post "asked Invitational readers to put away their keyboards and open their cupboards for a contest to portray people or events from the 21st century using only food as materials." Their citation for Abby's work reads: "'MalloMars Rover: Search for S'more Data' by Abigail Fraeman, St. Louis. Abigail, a grad student at Washington University, is a scientist on NASA's Mars rover missions, and here she

I think the last time you heard from Abby in this space was when she was reviewing Buzz Aldrin's "performance" in Dancing with the Stars, so I think I had better make it clear that Abby is as capable of being serious as she is of being silly. Two weeks I stumbled across her excellent poster presentation at the American Geophysical Union meeting, where she told me all about her work with Ray Arvidson at Washington University in St. Louis on the new CRISM technique of oversampling in order to achieve higher resolution data on the surface of Mars. Her poster may be downloaded in PDF format here. Good work, Abby, in both poster and chocolate media! 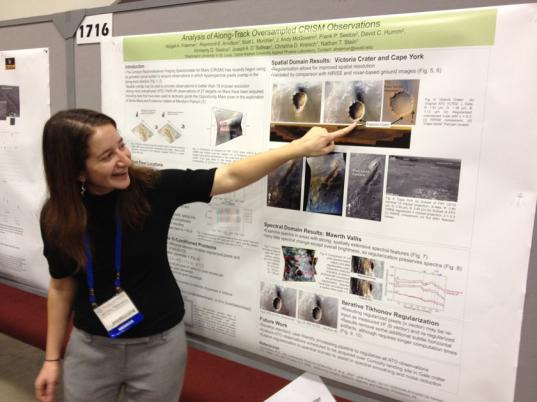 Abigail Fraeman presents her poster, "Analysis of Along-Track Oversampled CRISM Observations", at the 2011 Fall Meeting of the American Geophysical Union. Her poster may be downloaded in PDF format here.