If you can't figure out whether or not I'm joking with the title to this blog post, it's OK, because I'm not sure either! It's great news that we can predict space weather at all; but experience with Earth weather predictions inspires caution in relying too much on such things.

I'm writing about space weather because I just attended a workshop for the press at the 2011 American Geophysical Union meeting about space weather. Space weather refers mostly to the magnetic and charged particle storms that can come our way from an active Sun. I don't write much about this, which means I'm ignoring a large number of robotic missions operating beyond Earth. 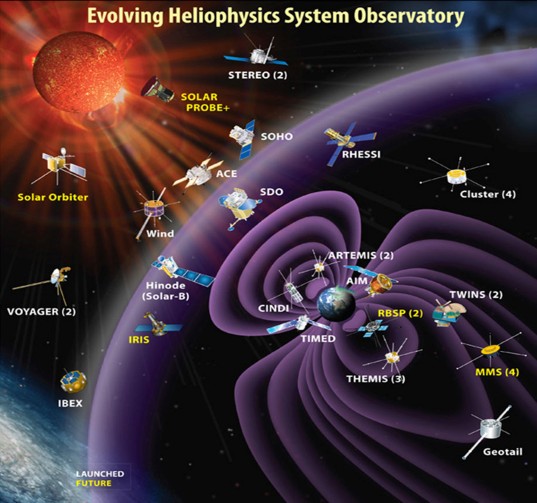 Spacecraft studying the Sun in 2011

The main news that I heard at the workshop was that the National Oceanic and Atmospheric Administration (NOAA) has very recently put into action the "first operational, physics-based space weather model, now running on the computers of the National Weather Service."

I should pause to define the word "model." When physicists talk about a "model," what they mean is that they've written down some equations or developed a computer program where you can tweak input parameters, run them through the model, and come out with predictions for how some system in the real world will behave. A good model is one that can make accurate predictions. Models are never perfect because they are necessarily very simplified, but the goal is to get predictions very close to what actually happens.

A model can't be any better than the data you put into it to set its initial conditions. Thankfully, we have a lot of spacecraft studying the Sun: SOHO, ACE, the twin STEREO spacecraft, SDO, and so on. They are all valuable but SOHO and ACE are especially crucial for space weather prediction, because they're the only ones that sit any closer to the Sun than Earth does. Therefore, they're the only ones whose measurements can provide data on the intensity of space weather events that are headed toward Earth. Check out this event from 2003, an explosion that SOHO witnessed. You can easily see when the flare hits SOHO, because the detector is suddenly snowed by the telltale streaks of energetic particles.

Heliophysicists have employed the wealth of data returned by our solar observatories to develop a model that can provide accurate predictions of how such flares will affect us in the future. Here's an example of a single coronal mass ejection that happened on June 7 of this year as seen by four different spacecraft, followed by their simulation of the same event using their model. First, here is the view of the event from SDO. The flare happens toward the end, erupting out of the Sun's lower right quadrant.

Next up, the view from SOHO, a wider-field view. Both SOHO and SDO have the same line of sight on the Sun as Earth does -- SDO is in Earth orbit, and SOHO sits at the Earth-Sun L1 point.

Recently, the twin STEREO spacecraft have set up position on opposite sides of the Sun, giving us a truly 360-degree view of our star. Here's the view from STEREO-A, which orbits ahead ("A" for "Ahead") of Earth, so the coronal mass ejection is in the lower left quadrant of the Sun as seen from STEREO-A:

And here is the view from STEREO-B ("B" for "Behind"), which did not see the face of the Sun from which the flare erupted.

So we have all this information on this huge event from all these different viewpoints, information that heliophysicists could use to define and tweak their model. So here is their model in action, which tells you what effects the flare would likely have at other important locations in space -- like at Mercury, Venus, and Mars, where we have other spacecraft in orbit -- and shows you that we were lucky to get struck such a glancing blow.

Just for fun, here's the model showing the behavior of a different event.

With models that work, NOAA is now providing space weather prediction products to customers of all kinds, from commercial airlines, to electric power grid operators, to government agencies. But the models do rely particularly on ACE for warnings of solar storms headed our way, and ACE is 10 years past its design lifetime. So Rodney Viereck, director of NOAA's Space Weather Prediction Test Bed, was very happy to announce that DSCOVR has been funded to be launched to replace ACE -- but not until January of 2015. We have to hope that, as the Sun continues to rouse from a historic minimum, ACE remains operational to give us those warnings until DSCOVER can get up there.

This post may be a few years old now (just found it from a link in the excellent atmosphere explainer post of 5/5/2016), but it's still just begging for this: http://www.memegasms.com/media/created/vhyfxm.jpg :)