EDIT: A couple of people have pointed out to me that, contrary to what I'd said earlier, Cassini successfully acquired SAR images from a much greater distance from several other icy moons.

Cassini is equipped with the capability of using its radio dish as an imaging system in order for it to peer through Titan's thick haze to see sharp details on its surface. Where Titan appears blurry and smudgy to optical instruments like the cameras and imaging spectrometers, its features pop into sharp relief in Synthetic Aperture Radar (SAR) images. It doesn't always make mysterious Titan's features any easier to interpret, but it at least makes Titan slightly less of a Rorschach test to imaginative scientists.

Guabonito crater appears to be a ring of bright hills about 90 kilometers (56 miles) in diameter. It is possible that it has been modified or at least infilled by windblown dark sand. Its appearance looks surprisingly similar to Cassini's optical and radar instruments.

SAR images were key in the determination of the fact that Titan's dark "oceans" surrounding its bright "continents" are actually seas of windblown sand forming long, parallel dunes.

SAR image of dark longitudinal dunes that have formed around higher-standing bright areas.

Although Cassini has used its RADAR instrument to perform other sorts of observations on Saturn's smaller moons (things like scatterometry and radiometry), until last month it had never performed SAR imaging on any body except Titan. That's because the SAR technique only works when Cassini is passing relatively close to a target, no farther than 4000 kilometers and ideally closer than 1500. At such times, all the other instruments want to get in to the act, too. But Cassini's radar dish is pointed perpendicularly to the optical instruments. (There are good reasons for this. Among them, the dish serves as an umbrella when Cassini passes through dustier parts of Saturn's ring plane; at those times, Cassini is pointed in what they call the "ram direction," with the dish facing forward along its orbit, protecting the delicate optical instruments from damage from particle impacts.) In a fight between one instrument (RADAR) and all the optical instruments (ISS, VIMS, UVIS, CIRS) for who gets to perform imaging during rare close encounters with the other icy moons, it's no contest; there's just much more value in getting those combined optical observations than there is in getting just one skinny noodle of RADAR SAR data.

But for one of Saturn's mid-sized moons, a large number of encounters have been planned into Cassini's busy schedule. That moon is Enceladus. On the November 6, 2011 flyby of Enceladus -- the third such flyby in just a few weeks -- the Cassini mission elected to take a SAR swath instead of using the optical instruments for once. So here it is: the first-ever SAR swath on Enceladus. In fact, the only other places we've ever done SAR imaging are Earth, the Moon, Venus, Iapetus, and Titan. 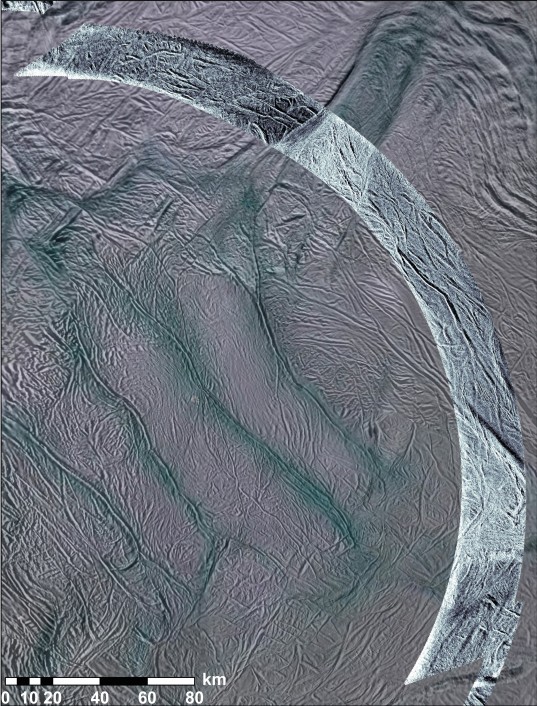 Cassini's first ever Synthetic Aperture Radar image of a world other than Titan was obtained on 6 November 2011. Here, it's overlaid on a mosaic of camera images of Enceladus' south pole. Bright and dark edges of the swath are artifacts of the radar imaging process. Visible-light images, like we normally see in photographs, are mostly bright or dark depending on their target's chemical composition, while brightness in SAR images usually depends on how rough or smooth the surface is. The SAR swath is about 15 miles (25 kilometers) wide and is centered at 65° south latitude, 295° west longitude.

The color in the background image is used to separate different materials using ultraviolet, visible and infrared images taken from 2004 to 2009. Blue colors represent icy material that originated in the plumes and fell back to the surface. Since these images were taken using illumination by sunlight, they sense ice particles and other roughness in the wavelength range of 50 to 100 microns. The SAR swath uses microwaves 2 centimeters long in wavelength to "light" the surface, so it senses roughness in that range. In addition, the SAR may be seeing that roughness slightly under the surface.

From east-to-west (bottom right to top left), the SAR image crosses near-south-polar terrain close to many of the active sulci, which are long fissures. Throughout the scene, the surface is covered with a network of linear and near-linear grooves and fractures, interpreted to be due to extension, or pulling apart, of Enceladus' crust. These are dominated by a set of larger grooves, about a kilometer wide, running many tens of kilometers in length, and smaller grooves about 200 meters wide. A v-shaped region near the lower (eastern) end of the SAR swath, bounded by large faults, appears brighter to radar than most other areas, most likely the result of a rougher surface in the 2-centimeter-wavelength scale. Within, the terrain appears to be slightly more broken up, possibly the result of more dynamic tectonic forces disrupting the surface. The few-kilometers-wide fault bounding the westernmost (top) edge of this area looks similar to the four active sulci that run parallel to it, suggesting that it is formed by the same processes. A similar fault about 2 to 3 kilometers wide runs along the center of much of the SAR swath for at least 75 kilometers. Farther west still, the swath crosses another v-shaped, SAR-bright region bounded by large faults, including part of the Mosul Sulci system. Once again, the network of fractures within the bright region appear to be rougher and more broken up. It also coincides with unusually colored terrain surrounding the active sulci (seen in the background images), and so possibly indicates a relatively young or active surface.

Here are two zooms on the swath presented in animated GIF form, so you can compare the optical to radar images. They're really surprisingly similar (at least, it surprised me). One way in which they're different has to do with different illumination geometry. To make SAR images, Cassini doesn't look straight down; it has to look to one side or the other of the ground track. (An explanation that'll probably be opaque to most of you: that's because SAR imaging is fundamentally a delay-Doppler technique, and in order for the "delay" bit not to be ambiguous it can't point straight down.) So the sense of radio illumination is from one side of the swath (I thinkit is the north side, but I'm not totally sure). There are places where grooves that are visible in the optical images disappear in the SAR; those are places where the grooves are parallel to the radio beam, so the radio beam illuminates both sides of the canyon equally, and consequently neither side appears darker or brighter than the other.

It might surprise you to learn that although the science team thinks the SAR data on Enceladus is interesting, the main goal of this activity is to learn about Titan. How does that work? Most of what we think we know about the geology of Titan on scales of tens to a few thousands of meters comes from the SAR imaging. But SAR imaging is weird. SAR images look superficially like optical images, because much of the bright-and-dark variation results from local topography. What I mean by that is that slopes that face toward the source of illumination look bright, because they're reflecting more toward the viewer, whereas slopes that face away from the source of illumination look dark. But there are other ways in which SAR images are very much not like optical images. There's the confounding effect of surface roughness, for one thing. Gravelly surfaces would look very bright in Cassini SAR images, because facets that are roughly the same size as the radio wavelength (in this case, 2 centimeters) multiply bounce the signal back at Cassini. On top of that, there's the confusing and hard-to-parse effect of transparency; the radio waves probably penetrate at least some distance into the surface, so they could be reflecting from things below the surface, meaning that the SAR images could very easily look quite different from the optical images, which only bear information about the top micron or so of the moon's surface.

It'll be too soon for any deeply thought analysis of this work to be presented at the American Geophysical Union meeting next week. So I'll be patient, but when the Lunar and Planetary Science Conference rolls around next March, you can bet I'll be pestering the RADAR team to find out what they've learned!