Brief contact made with Phobos-Grunt after two weeks of silence

UPDATE 21:30 UT: RIA Novosti reports that ESA representative Rene Pishel stated that Perth successfully received telemetry from Phobos-Grunt and has forwarded the data on to Lavochkin for analysis. He also stated that the communications session lasted only six minutes, so cautioned that the amount of data received may be very little.

Still, the facts that the spacecraft can (1) hear commands from Earth (2) respond to them correctly and (3) broadcast a signal to Earth are all very, very good news.

On Tuesday, November 22 at 20:25 UTC, a European Space Agency ground station in Perth, Australia, successfully made brief radio contact with Phobos-Grunt. It is the first time that the spacecraft has talked to the ground since just after its separation from the upper stage of the Zenit rocket on November 8. In order to make contact, the ground station had to transmit a command to the spacecraft to switch on its transmitter. The spacecraft heard and responded to the command by switching it on, broadcasting a carrier signal but no telemetry. ESA detected the transmitted signal. 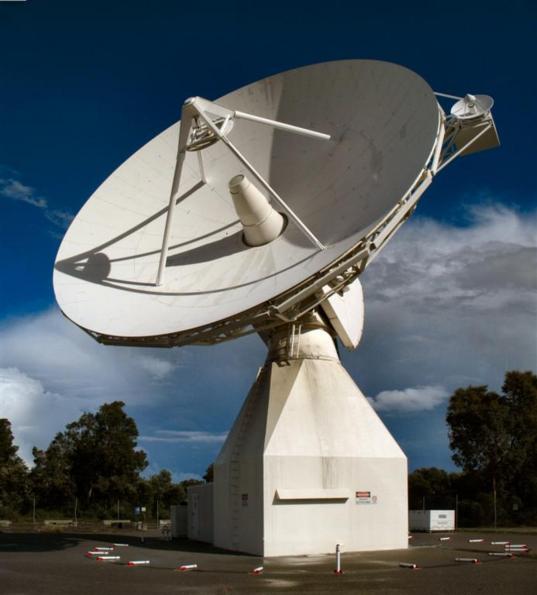 ESA's Perth station is located 20 kilometres north of Perth (Australia) on the campus of the Perth International Telecommunications Centre (PITC), which is owned by Telstra, and operated by Xantic. This antenna is 15 meters in diameter and has a 1.3-meter "search antenna" mounted to its side.

The next steps involve using the Perth station to attempt to receive telemetry. RIA Novosti quotes an ESA official, Rene Pishel, as saying that five attempts are planned over Wednesday night and Thursday morning: 20:25, 21:57, 23:32, 04:16, and 05:49 UTC.

In order to make contact, the Perth station had to overcome several significant challenges requiring modifications to their ground station. Although Phobos-Grunt has been tracked since launch by optical telescopes, its orbit was not known precisely enough for controllers to aim the radio antenna's narrow beam. Also, Phobos-Grunt's receiver is designed to receive extremely faint signals, and the ground stations broadcast with too much power. So they added a feedhorn antenna to one side of the main dish that could transmit a signal at much lower power and over a much wider cone of the sky. It was using this new feedhorn to transmit the command to Phobos-Grunt that they successfully commanded the spacecraft to switch on the transmitter, which they picked up with their larger dish. The BBC reports that as a byproduct of their reception of the signal, they were able to reduce the uncertainty of their knowledge of the spacecraft's orbit. 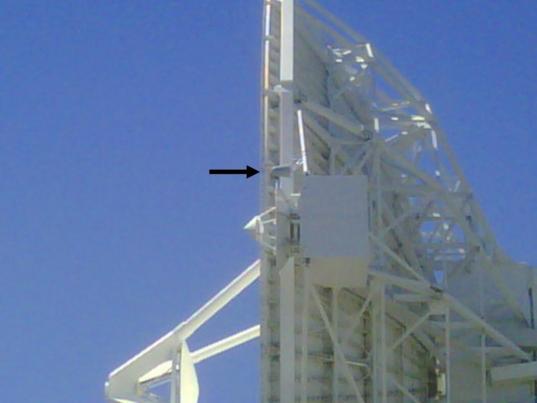 View of the Perth 15-meter antenna showing the feedhorn antenna mounted near the small, 1.3-meter search antenna, both mounted at the side of the main dish. The mini-antenna was used to send telecommands to Russia's Phobos-Grunt mission in Earth orbit on November 22, 2011.

Other challenges result from the low and fast orbit occupied by the spacecraft. To communicate with a ship in low-Earth orbit, the ground station must be able to turn quickly (a capability the antenna already had), as well as to receive a signal whose frequency varied substantially over the very short period in which contact was possible because of the Doppler shifts caused by the spacecraft's fast motion.

There is no question that hearing from the spacecraft is good news, providing a hope that the mission may be salvaged. But it's not time to celebrate just yet. Russia is far from having a commandable spacecraft prepared to go on to another planet.

Why might ESA have been able to establish contact when Russia could not? The answer has to do with the geometry of the spacecraft's orbit. Phobos-Grunt circles Earth 16 times a day, and it spends half of each of those orbits in shadow -- a condition that deep-space spacecraft are not usually designed to experience except in unusual circumstances around launches and arrivals. While Phobos-Grunt is over Baikonur, it has been in shadow. While it is over Perth, it is in sunlight. So -- keeping in mind that this is statistics of small numbers we're talking about -- the success from Perth may indicate that for some reason Phobos-Grunt can only communicate with Earth while it is in sunlight and solar panels are receiving power.An unnamed source told RIA Novosti that the spacecraft may power off 16 times a day when it enters Earth's shadow. In a spacecraft configured for interplanetary flight, the source speculated (I think it's speculation -- I don't know how confident the unnamed source is in this information), the detection of no power coming from the panels would be an anomaly that would require the spacecraft to go into some emergency mode.RIA Novosti has set up an index page for its coverage of the successful communication session with Phobos-Grunt and the following events. There are various discussions about what Russia might do if it reestablishes control of Phobos-Grunt -- take it to Mars but not back, take it to the Moon, take it to a near-Earth asteroid -- but all of these are premature until control is established and the state of health of the spacecraft is understood, so I don't plan to report on them.