Phobos-Grunt, the morning after

21:12 UT: Corrected the sentences regarding the role of Ted Molczan in notifying the public about what Russian mission controllers knew about the state of the spacecraft.

19:09 UT: Appended some minor updates, including one report that ESA has formally offered the aid of its tracking stations to Russia.

I repeatedly rewrote yesterday's post on the problem suffered by Phobos-Grunt after its apparently perfect Zenit launch and thought it was time to begin fresh. To summarize briefly: the problem left Phobos-Grunt in a low-Earth orbit in safe mode (a protective state triggered by the spacecraft detecting an unexpected condition that posed risk to the mission). It was still alive and talking to ground stations, having expended none of its precious fuel. All things considered, this is really one of the best states a spacecraft could be in after having suffered a serious problem immediately after launch. Today they plan to establish contact with Phobos-Grunt while it is visible from Baikonur.

It appears that the Zenit's first and second stage firings went as planned, leaving the spacecraft in an elliptical, low-Earth orbit (207 by 347 kilometers) with an inclination of 51 degrees. It also appears that the spacecraft successfully separated from the Zenit second stage. After that, there were supposed to be two firings of an upper stage derived from the Fregat, equipped with a jettisonable external tank. One firing would raise the apogee of the orbit to about 4,170 kilometers. Then the external tank would be jettisoned. Two hours later, the Fregat would fire again, injecting the spacecraft onto an interplanetary trajectory. Here's a diagram showing what was supposed to happen. The spacecraft is currently on the orbit drawn by the yellow circle (which is not to scale). 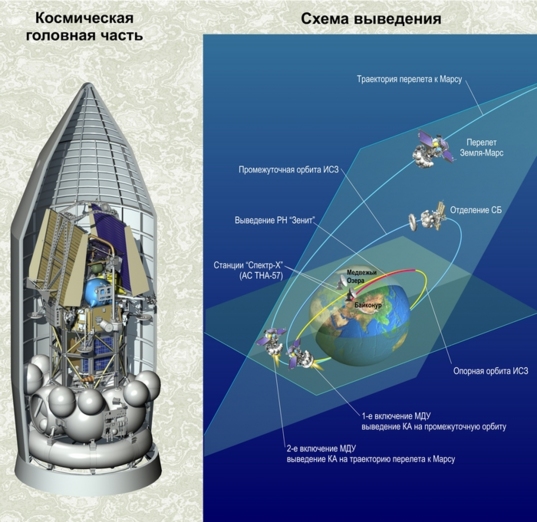 Neither of these two Fregat burns happened. As explained in a RIA Novosti story posted at 07:26 today, one reason for the initial confusion was that both of these burns were to happen out of sight of Russian ground stations. So Russia had previously appealed to amateur astronomers in South America to find and track the spacecraft. So it was an amateur astronomer, Ted Molczan, who was the source of the first public notification that there was a "serious problem." As a result of his leadership of some amateur efforts to track the spacecraft as it passed over South America, Molczan had previously had contact with the Phobos-Grunt mission, so he was informed by the mission of an apparent problem and quickly spread the information to his mailing list. He wrote that "Observers are requested to attempt to discover the spacecraft in the initial LEO parking orbit." After the first planned burn, the orbit had not changed at all from the initial parking orbit, and there were two objects occupying that orbit. It was later confirmed that the second object was the upper stage of the Zenit, separated from Phobos-Grunt.

Another viewer looking for the burn to happen was Space Station astronaut Mike Fossum. I'm told by someone from ISS Mission control that "Commander Mike Fossum got up in the middle of the night specifically to look for the probe and get a view of the departure burn. As you are probably aware, it appears no burns were completed. The crew reported they were able to see the probe glinting in the sun prior to the burn and never saw a rocket firing and then of course the vehicle did not accelerate form their viewpoint as had been expected." Fossum was reporting this over the Space to Ground communication loop, which, he said, people can listen to on various websites -- did anybody hear this? Is there a recording somewhere?

The fact that the burns did not happen was officially confirmed by Baikonur head Vladimir Popovkin in a story posted by the RIA Novosti agency at 02:13 UT November 9. A bilingual commenter on yesterday's post provided a nuanced translation of his statements, which I'll repost here:

"We've had a rough night. We could not locate the spacecraft, and now found its coordinates. It turned out that the propulsion installation did not activate. There was no first or second burn." said Popovkin.

According to his statement, it is possible that the spacecraft "could not reorient itself from the Sun to the stars".

"It is a difficult path, and it is possible that the instruction to turn on the propulsion system was not relayed to the sensors," noted Popovkin.

He remarked, that this was an unusual situation, but a workable one. It was an anticipated one during the development of the project, and the order of actions in a situation like this was prepared. [NOTE: This confirms something that Lou told me -- which is that this is one of the failure modes that they had prepared for in their contingency planning. It does not mean they have solved the problem, but it does mean they do have a plan already developed to work through to attempt to solve it. --ESL]

"We will reinstall (re-initiate) the program on the spacecraft. The orbit, at which the craft is located is stable, no tanks were dumped, no fuel was used up" said the head of Roskosmos.

He added that the time for the re-initiation of the program that is available to the specialists is three days. [This time limit could result from several different causes. Two that I can imagine have to do with the power situation and with the time they have before they will no longer be in position to inject onto their interplanetary trajectory. But there's no official statement on the reason for this three-day limit. --ESL]

Reports suggest the spacecraft attempted to orientate itself in space using the stars, failed to pick them up and therefore did not execute the firings as planned.

"It looks like the engine system has not worked," Vladimir Popovkin, the head of the Russian space agency (Roscosmos), explained.

"It seems it couldn't reorient itself away from the Sun towards the stars so the sidewall closed. It was foreseen by the flight program. Now, we have found its location, and we have to unpack the sidewall, to check the telemetry and after that we will restart the spacecraft control program to reboot the mission. The craft is in a support orbit. The fuel tanks were not jettisoned after the first switch-on."

And he added: "I would not say it's a failure; it's a non-standard situation, but it is a working situation."

An official statement from Roscosmos today states (in Google translation) "the spacecraft is operating normally" and that "all the parameters of the spacecraft motion [are] currently defined." Here is Anatoly Zak's translation/summary of the complete statement:

Only on the afternoon, November 9, Roskosmos issued an official press-release stating that two first post-launch contacts with the spacecraft had showed normal operations of the spacecraft according to the flight plan. However engine firings planned beyond the range of ground stations did not take place. Currently, all necessary parameters of the spacecraft motion had been determined, the statement said, however due to low orbit of the spacecraft it would not reenter the range of Russian ground stations until 23:00 Moscow Time (14:00 EST) on November 9. Based on the analysis of data, Roskosmos promised to prepare and upload onboard all necessary commands for the resumption of orbital maneuvers. Most importantly, the agency assured that a more accurate estimate of the mission's orbital parameters and power supplies onboard the spacecraft had provided two weeks for the transmission of new instructions to Phobos-Grunt.

Specialists Space Agency on Wednesday night to try to derive the unit "Phobos-Grunt" on the flight path to Mars, "Interfax-AVN," a source in the space industry.

According to him, at 23:00 Moscow time on the "Phobos-Grunt" will be located within sight of land measuring point at Baikonur. At this time, specialists will get a telemetry device that will allow them to establish the exact cause of this situation.

After analyzing the information received will be taken to solve the problem, if it is recoverable as a whole, and conduct exercises for the transition to transition, and then otletnuyu orbit.

The interviewee said that "Phobos-Grunt" will appear in the zone of Russian surveillance before - about 21:30 Moscow time, but the only ground station Baykonursky able to remove all telemetric information and, more importantly, to issue a command to carry out the maneuver.

"In connection with the existing restrictions on the orbit altitude and power supply equipment, maneuvers to try as soon as possible, and to hurry in this matter is not necessary - one mistake can lead to loss of vehicle", - said the source.I interpret this to mean that although the spacecraft will be visible from one Russian station at 21:30 (17:30 UT), only Baikonur has equipment necessary to adequately translate the telemetry into information on the exact state of the spacecraft.A somewhat contradictory story is posted on the website Vesti, which states (in Google translation)

The first attempt to run the propulsion of interplanetary station "Phobos-soil", which did not come out on the flight path to Mars , will be held this evening, according to ITAR-TASS .
quot;The first attempt to turn the sustainer propulsion (MRL), the automatic interplanetary station" Phobos-soil "is scheduled for 21:16 Moscow time," - said a source in the space industry. Experts estimate that at this time, the unit will be at the correct point of the orbit, where it is possible to give the necessary impetus.

The story is referring to ITAR-TASS. But the most recent article I can find from ITAR-TASS is this one, which makes no mention of an attempt to fire the engines today.

A story posted at 07:24 by RIA Novosti mentions that the spacecraft is insured against all risks for 1.2 billion rubles.

14:06 UT: from 1TV.RU: A bit of clarification on last night's statement about it being solvable if a software problem and not if a hardware problem. Igor Tsiolkovsky of the Russian Academy of Cosmonautics is quoted as saying (in Google translation): "The station is not oriented correctly. Now the station designers understand what happened. One of the options - a bug in software that is crept into the program must be a mistake. Option Two - denied the star sensor. The station is operational, all the items on it were opened everything works great, it connected." I believe that this means that they are exploring two possible failure modes: a software bug or the failure of the star sensor. Indeed, if the star sensor has failed, that would be very bad. Apart from this issue, however, the spacecraft is otherwise in good health. The same scenarios are discussed at the end of this RIA Novosti story.

17:30 UT: from fr.ria.ru: Google translation from French: "The European Space Agency (ESA) has proposed to Russia to use its radar to make additional contacts with the Phobos Grunt, stuck in Earth orbit after launch to Mars, said Wednesday Rene Pichel Chief representation of the ESA in Moscow."

Also, a comment to the pedants who continually point out that it is correct to translate "Фобос-Грунт" to "Phobos-Soil" or transliterate it to "Fobos-Grunt" but find the combination of translation and transliteration into "Phobos-Grunt" an abomination. The fact is that most sources on the Web, including most Russians writing in English, use "Phobos-Grunt." It may be wrong, but it's what is in general use, and I'm not planning on switching my usage at present. If I were to make an all-new website I might convert to "Fobos-Grunt" -- but I'd still have to include the text "Phobos-Grunt" on every page to help people search for any reports on the mission using the most common English version of the name.