It's still three weeks until Curiosity's launch date, but the spacecraft has already been placed on top of its rocket. The Kennedy Space Center's Curiosity photo album now has lots of pictures of the spacecraft being enclosed inside the payload fairing (the rocket's "nose cone") and hoisted to the top of the Atlas V. But there's a couple of cool and unusual things to notice in these pictures, which have to do with an unusual final preparation that Curiosity has yet to undergo before launch. 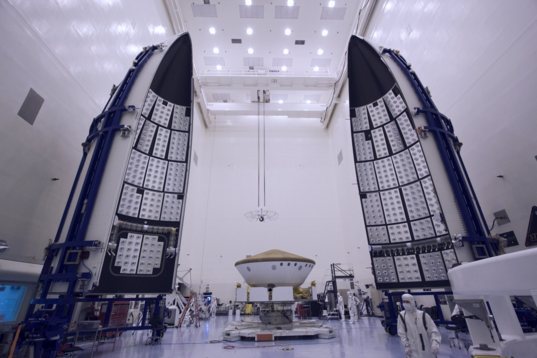 In the Payload Hazardous Servicing Facility at NASA's Kennedy Space Center in Florida on October 25, preparations are under way to enclose NASA's Mars Science Laboratory (MSL) in an Atlas V rocket payload fairing. The blocks on the interior of the fairing are components of the fairing acoustic protection (FAP) system, designed to protect the payload by dampening the sound created by the rocket during liftoff. The fairing will protect the spacecraft from the impact of aerodynamic pressure and heating during ascent.

On November 3, 2011, the Curiosity rover, inside its payload fairing, was hoisted to the top of its Atlas V rocket.

One of the two hatches in the fairing corresponds to a matching one in Curiosity's protective backshell. Both hatches will be opened about a week before launch (that is, two weeks from now) in order to install the MMRTG, Curiosity's radioisotope power generator. As I've discussed here before, Curiosity's freshly installed MMRTG will throw off a lot of heat. While Curiosity is in space, a system built into the cruise stage will pump coolant fluid through the rover on a cooling circuit that will pipe waste heat from the interior of the spacecraft to radiators running around the periphery of the cruise stage -- those are the white plates that you can see on the spacecraft in the background. While it's inside the fairing, though, that system can't radiate to space. Instead, those pipes that run around the inside of the fairing will blow conditioned air onto the cruise stage radiators, which will then be able to perform their function of cooling the MMRTG.

In the other sequence of photos, showing the encapsulated spacecraft being lifted onto the rocket, you can see a dangling white hose attached toward the top of the fairing. That will also carry conditioned air, which will cool the spacecraft and also maintain positive air pressure inside the fairing, preventing microbes and contamination from Florida's moist air from reaching the spacecraft.

Thanks to Dave Woerner and Rob Manning for answering the questions I had about this. I know that the plutonium power supply of this rover concerns some people so it's very important that those of us who understand how critically important plutonium-238 is to the exploration of our solar system put out correct information about its use and show the care that is taken to use it safely. If you want to learn more about the use of radioisotope power systems in space, the American Astronomical Society provides lots of information, including up-to-date information on what's happening in Washington and how to support the restart of plutonium-238 production.