Today I'm reviewing -- and recommending -- two art-laden books. Michael Carroll's Drifting on Alien Winds is nonfiction, while the IAAA's The Beauty of Space is an art book, but both books are about describing our understanding of the alien-yet-familiar worlds across our solar system, and what they'd look like if we could stand on them. 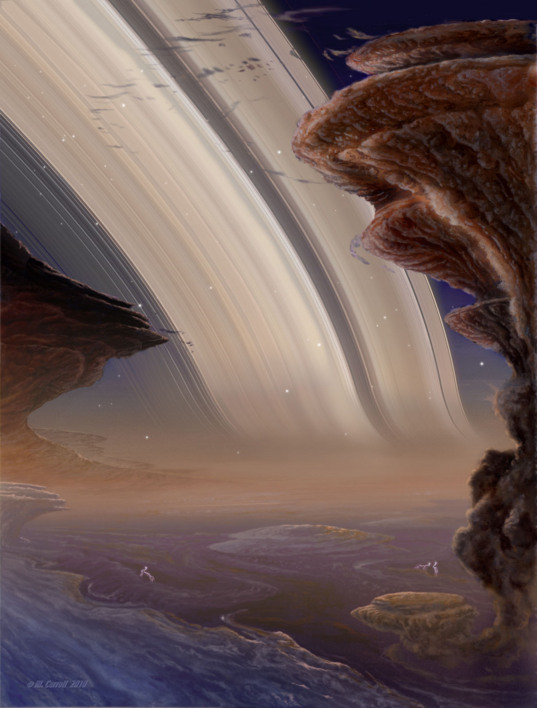 Saturn nights are spectacular. The rings arc across the evening sky beyond towers of ammonia and water clouds. At the horizon, the rings appear to bend in the dense air.

Drifting on Alien Winds is a survey of planetary meteorology, covering the airy spheres of Venus, Mars, Titan, Triton, and the giant planets. I highly recommend it as a readable, broad, basic text on planetary atmospheres, and think it would be useful for both space enthusiasts and professional planetary scientists whose geology or astronomy backgrounds may have provided little education about meteorology. I myself have tried to read up on the skies of Venus and Jupiter but have always felt that I lack whatever basic knowledge is needed to be able to understand academic texts on planetary weather. This book fills that gap admirably, and I expect to refer to it frequently when I write about atmospheric science. (It's also the first text on planetary atmospheres that I have tried to read that has not instantly put me to sleep, which may sound like faint praise, but I mean it when I say I enjoyed reading it.)

The author, Michael Carroll, is a well-known space artist as well as a writer, and the book reflects that. It is packed with illustrations and artists' concepts (mostly Carroll's own work) of what these alien skies look like. I love the images but there are so many that most are reproduced painfully small; older readers than I may need a magnifying glass to read details from charts and paintings. My only other quibble with the book is that I found an early chapter that basically summarizes all of planetary exploration to be unnecessary, since the relevant missions are described again and in more detail in later chapters. The heart of the book, and its best part, is the five chapters that explore the skies of Venus, Mars, Jupiter, Saturn and Titan, and the ice giants and Triton. 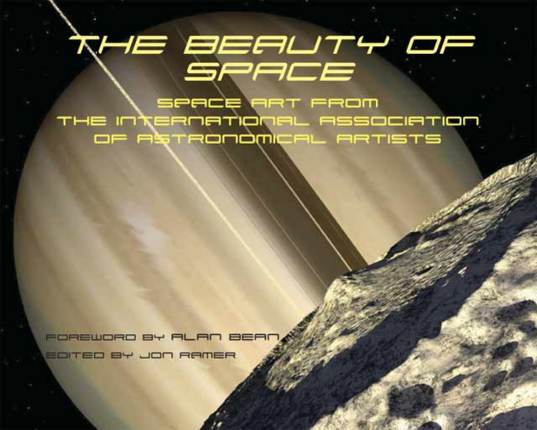 The Beauty of Space

The Beauty of Space packs an incredible amount of information and art into a rather unassuming-looking, 180-page paperback. It is a catalogue of art and artists who are members in the International Association of Astronomical Artists, as well as a history of that organization. The IAAA is devoted to the production of art that reflects the state of our knowledge about what other worlds really would look like if we could stand on or in them, so all of the art in this book is not only pretty but it is very well-researched. The 11 chapters were contributed by IAAA members and edited by Jon Ramer. The chapters loosely divide the art by subject or medium -- naturalistic paintings of planetary surfaces, of deep-space objects, and of space hardware, as well as chapters on sculptural and digital artwork. The quality of the printing is very high -- colors are rich and edges are very sharp, far superior to the images in Drifting on Alien Windseven though the images are often not that much larger. The text also provides suggestions on techniques for producing realistic space art. I'd recommend the book to anyone who's ever thought about producing -- or commissioning -- space art, or to anyone who likes to imagine themselves standing on alien worlds. I only wish it were printed in a larger format. This should be a coffee table book!

Mat Kaplan recently interviewed Don Dixon and Jon Ramer talking about this book on Planetary Radio. The Planetary Society was instrumental in the founding of the IAAA, and that's something we're very proud of!