Science from Vesta at the Geological Society of America meeting

I'm nearly two weeks late getting to this news but better late than never, right? There was a press briefing from the Dawn mission at the Geological Society of America (GSA) meeting on October 12. The press briefing is fortunately recorded for posterity at JPL's Ustream channel, and I finally found time to watch it today. The GSA meeting happened the very week after the Division of Planetary Sciences meeting in France, where the Dawn team presented their very first science results from its orbital mission to Vesta, the second largest asteroid. But it's now clear that the Dawn team was saving some of their juiciest science results for presentation at GSA!

The results that they presented at DPS included basic physical properties and initial results from crater counting studies. The results presented at GSA largely concerned geomorphology -- the shapes of landforms on Vesta and what they mean about Vesta's history. In particular, two presenters, Paul Schenk and Debra Buczkowski, discussed the two most distinctive topographic features of Vesta, the south polar basin/mountain and what most of you are probably calling "grooves," though I'll call them "troughs," for reasons I'll explain below. 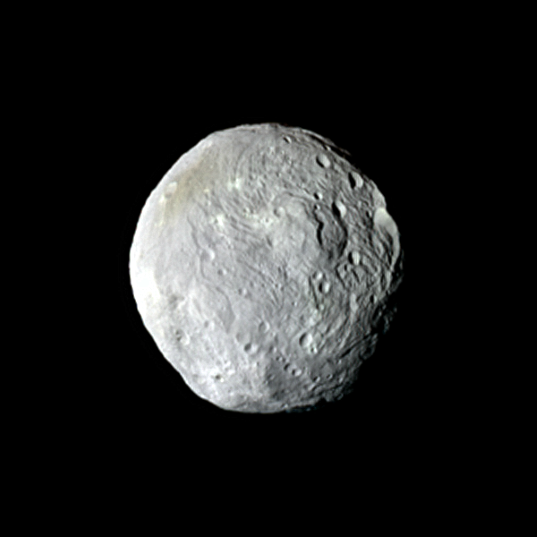 A view of Vesta more or less as the human eye would see it, made of images captured through color filters at 440, 650 and 750 nanometers (blue, red, and near-infrared).

Paul presented a topographic shaded-relief map of Vesta's south pole. Before you read what I have to say about it, I invite you to study it yourself and see what observations you can make! 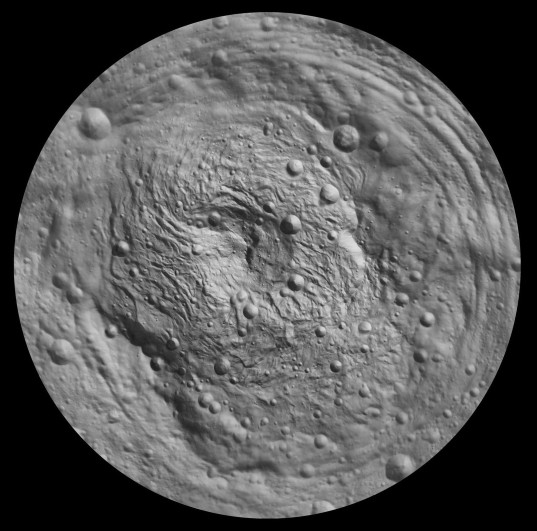 Presented by Paul Schenk at a press conference at the Geological Society of America meeting on October 12, 2011, based upon 250 m/pixel imaging of Vesta through Dawn's Survey Orbit phase.

Before I talk much about this map, I want to make a comment about its map projection. I'm sure all of you are aware that there is no way to draw maps of round bodies on two-dimensional surfaces without some distortion. The way that a 3D surface is mapped to a 2D one is called a projection, and there are lots of different choices of map projection depending on what you want to avoid distorting and what you don't mind distorting. So it's very important, when you're looking at a map, to think about in what way it distorts the true shape or size or angular relationships between surface features.

I am guessing, because it's a pretty standard choice for planetary polar maps, that we're looking at a polar stereographic projection. This means that the south pole is in the very center and the equator is at the outer edge and lines of latitude make concentric circles around the pole, closer spaced near the pole and spaced farther apart as you go to the equator. This map projection is nice because it does not distort the shapes of features very much, but it does exaggerate the sizes of features near the equator relative to features nearer the pole (this is probably why the image looks like it's more detailed near the pole than at the equator).

Anyway, I digress. What does this map reveal? First of all, the mountain at the center of the south polar basin is not actually at its center! Second of all, the equatorial troughs are pretty much but not perfectly parallel to lines of Vestan latitude. But the most surprising point isn't completely obvious from this view of the topographic map. Let's look at a different version of the same map, where topography is color-coded: blue is low, green is intermediate, and red is high. Surprise! Vesta has not one, but two south polar impact basins, neither of them perfectly centered on its pole. The circles drawn on this map, Paul said, are schematic, intended to indicate the general location but not the detailed outline of the two basins. 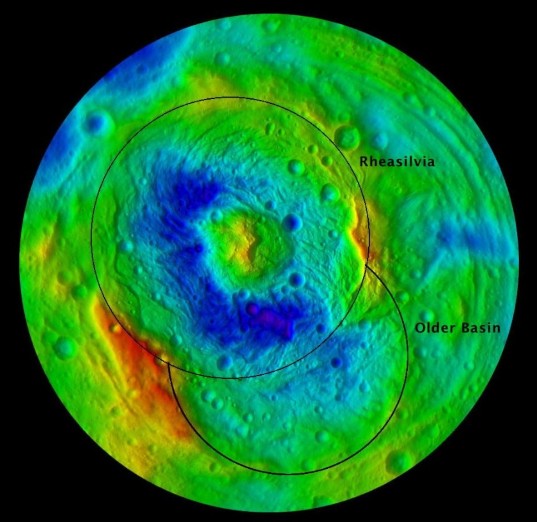 Not one, but two basins at Vesta's south pole

The larger and newer basin, with the central mountain, is the one named Rheasilvia. It is 475 kilometers in diameter. The older one, which was partly obliterated when Rheasilvia formed, is 375 kilometers across. Paul went on to say that he has located several other impact basins in the north, including two fairly large ones of 150 and 275 kilometers diameter. Here's a little sketch map I drew showing the locations of the two basins on a round Vesta -- you can see how the older one is centered a little way around the globe from Rheasilvia. 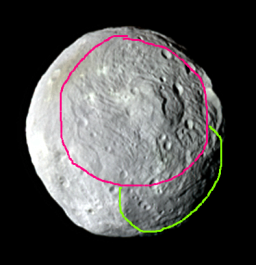 A cartoon of Vesta's two basins

OK, so that's one cool result. The other cool result concerns an initial description of those troughs. Buczkowski said that there were at least two sets of these features. The most prominent set is the one at the equator, which you can see in this lovely color view of Vesta composed by Daniel Machácek: 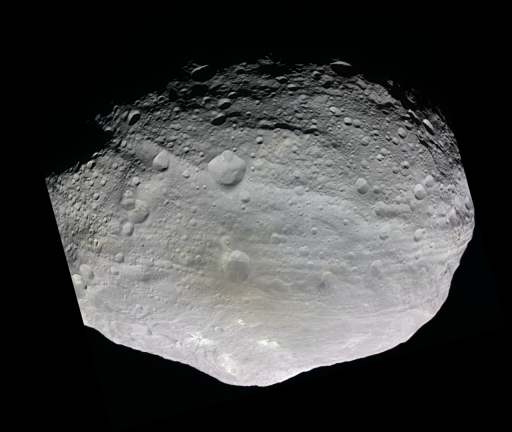 This RGB color image of Vesta was created using the 440 and 650 nm filters from Dawn's FC camera with a synthetic image used as green image. South is down and east is right. Dawn acquired these images from a distance of ~5200 km at a resolution of ~500 m/pix.

Buczkowski was careful not to call them "grooves," rather referring to them as "structural features" or "troughs," because the word "grooves" is already in use to describe two very different kinds of structures in the solar system (on icy moons like Ganymede, and small asteroids and moons like Phobos). It's probable that the features on Vesta did not form in the same way as the features on Ganymede or Phobos, and using the word "grooves" to talk about them might mislead people into thinking that they did originate in the same way as one or the other of those things. Anyway, Buczkowski described the troughs thusly: they are very long, visible across 240 degrees of longitude (that is, two thirds of the planet). They have steep, scarp walls and very flat floors. Individual troughs can be 380 kilometers long and 15 kilometers wide. 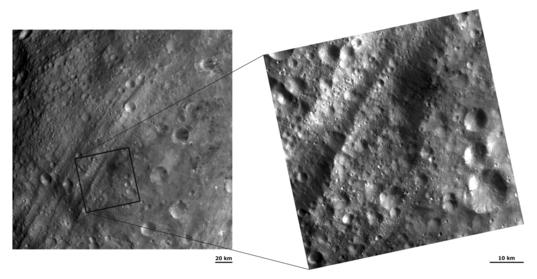 These Dawn images show a region around Vesta's equatorial troughs with two different resolutions. The image on the left has a lower resolution of 260 meters per pixel and the image on the right has a higher resolution of 66 meters per pixel. Many areas of dark material are visible in the lower-resolution image, including the dark hill (in box). The higher-resolution image displays more detail of this hill, such as its irregular contact with the rest of Vesta's surface. Many more details are also visible in the right hand image when compared to the left hand image, such as small linear grooves running roughly parallel to the troughs and slumping/landslide features in the crater in the bottom right corner. The wider-view image was obtained by Dawn during Survey Orbit, on August 20, 2011, and the narrower-view image was taken near the High-Altitude Mapping Orbit, on September 20. These images were taken through the camera's clear filter. The distance to the surface of Vesta was 2740 and 673 kilometers. Other spacecraft get wide- and narrow-angle views by carrying two cameras with different optics; Dawn accomplishes the same thing with a single camera by adjusting the height of its orbit.

But things get more interesting when you look northward. There are more troughs in the northern hemisphere: 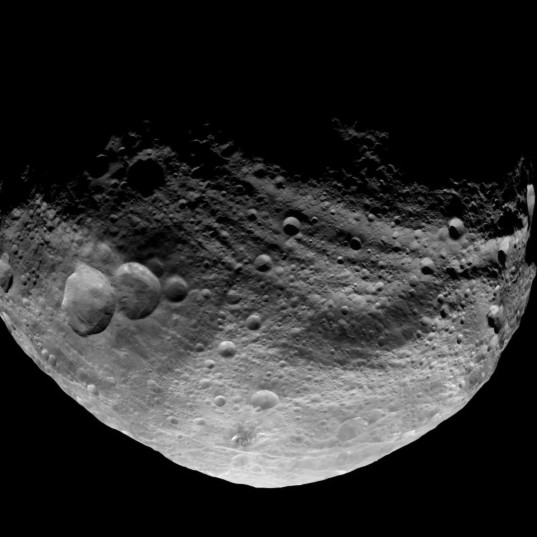 These troughs are not the same as the ones at the equator. They, too, can extend up to 390 kilometers, but they are much broader, around 40 kilometers wide. They appear to be older, with more muted topography; the walls are not as steep.

Here's another view of them, in the upper left of this view down onto the north pole. There's a hole in the middle of this map because it's winter in Vesta's northern hemisphere; sunlight doesn't reach the north pole at this time of its year. 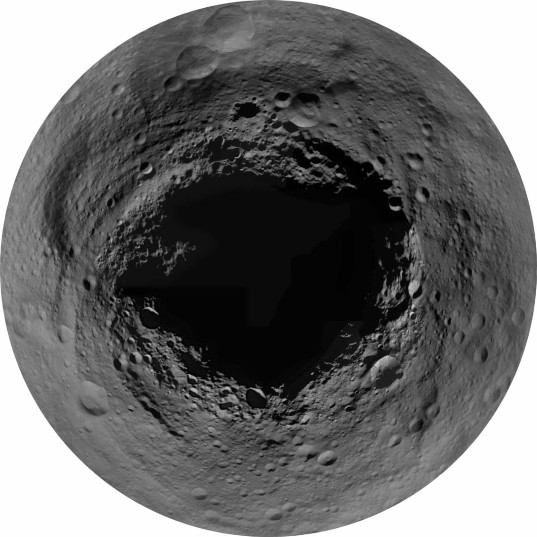 An approximate map of Vesta's north pole based on publicly released images as of November 2011, compiled by Phil Stooke. It was winter in Vesta's northern hemisphere; the central portion of the map is in winter darkness. Most of that gap will be filled in by the end of Dawn's mission at Vesta.

Why would the equatorial troughs have a different appearance from the north polar ones? Buczkowski had one suggestion. She said that by doing a structural analysis -- by mapping their shapes and figuring out what the troughs were concentric to -- each set is observed to be concentric to one of the two south polar basins. (Put in geometric terms, the troughs would be on small circles whose centers lie on an axis that passes through the center of Vesta and the center of the impact basin -- though Vesta's nonspherical shape complicates this somewhat, and I'm not sure how.) The equatorial troughs are concentric, she said, to Rheasilvia, and the north polar troughs are concentric to the older basin. And this fits the relative ages of the basins; the north polar set is more muted, therefore older, and it appears to be related to the older of the two basins.

Which would be a very cool story, if it turns out to be true. Looking at the two maps, of the south pole and the north pole, I actually am more convinced about the north polar features being concentric to the older basin than I am about the equatorial ones being concentric to Rheasilvia. Rheasilvia is clearly offset to the left and upward from the south pole of Vesta, while the equatorial troughs are not offset in the same way. But the non-spherical shape of Vesta might complicate the analysis in ways that I don't understand. Somebody needs to do some math!

The results presented at the GSA meeting, and at the DPS meeting the week before, were based upon data gathered by Dawn up to and including its Survey Orbit period in August. At the GSA briefing, deputy principal investigator Carol Raymond gave a preview of when we can expect further results to be released. Dawn is presently in its High Altitude Mapping Orbit (HAMO); the first results from that period will be presented at the American Geophysical Union (AGU) meeting, which runs from December 5 to 9 in San Francisco. At the time of the AGU meeting, Dawn will just have arrived in its Low Altitude Mapping Orbit (LAMO). The first results from that part of the mission will be presented at the Lunar and Planetary Science Conference (LPSC), March 19-23, 2012. At the time of LPSC, Dawn will still be in LAMO. Later it will start spiraling upward again, reaching HAMO 2 in June 2012, and it will depart Vesta in July of next year.