NPP's launching next week, and I'll be there to see it! (Hopefully.)

It's been killing me that I haven't been able to attend any of the major deep-space launches this year -- GRAIL, Juno, or the upcoming Curiosity. So I was thrilled when NASA announced the opportunity for Twitter users to register to attend a "Tweetup" at the launch of the Earth-orbiting spacecraft NPP. Earth-orbiting craft aren't my typical bailiwick, but that's not out of any disrespect to Earth orbiters; I just don't have time. But I'll make time, in order to see a launch, of a Delta II (the last currently scheduled Delta II!), close to home(!!), at night (!!!), at Vandenberg Air Force Base (!!!!), as one of only 20 people selected to participate out of more than 600 who registered (!!!!!). Launch is currently scheduled for October 28 at 2:48 a.m. local time (09:48 UT). They just passed their flight readiness review, and will begin fuelling the second stage on Monday. 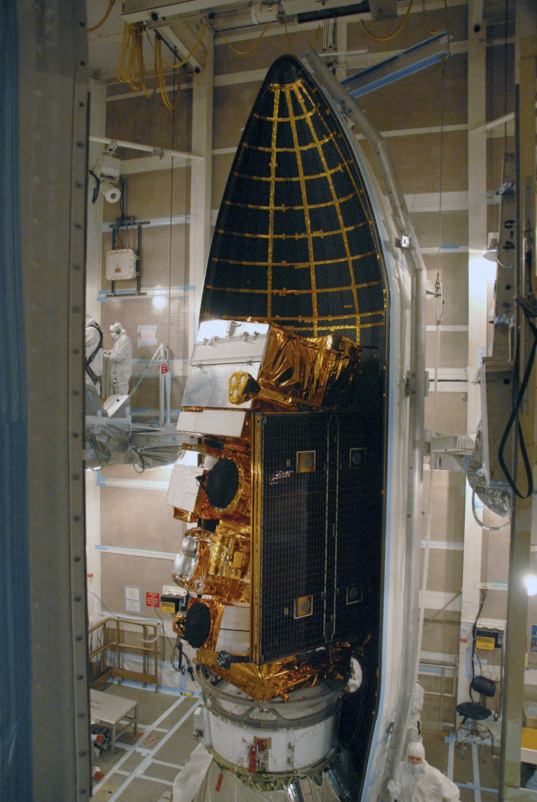 NPP half-enclosed in its fairing

At Vandenberg Air Force Base's Space Launch Complex-2 in California on October 20, 2011, technicians monitor the movement of a section of the clamshell-shaped Delta payload fairing as it encloses NPP. The fairing will protect the spacecraft from the impact of aerodynamic pressure and heating during ascent and will be jettisoned once the spacecraft is outside the Earth's atmosphere.

NPP represents a critical first step in building the next generation of Earth-observing satellites. NPP will carry the first of the new sensors developed for this satellite fleet, once called the National Polar-orbiting Operational Environmental Satellite System (NPOESS) but now known as the Joint Polar Satellite System (JPSS), which is scheduled for launch in 2016. (Thus "NPP" is an initialism containing an outdated acronym: NPOESS Preparatory Project.) NPP is the bridge between NASA's Earth Observing System (EOS) satellites and the forthcoming series of JPSS satellites. The mission will test key technologies and instruments for the JPSS missions.

NPP represents a critical first step in building the next generation of Earth-observing satellites. NPP will carry the first of the new sensors developed for this satellite fleet, once called the National Polar-orbiting Operational Environmental Satellite System (NPOESS) but now known as the Joint Polar Satellite System (JPSS), which is scheduled for launch in 2016. (Thus "NPP" is an initialism containing an outdated acronym: NPOESS Preparatory Project.) NPP is the bridge between NASA's Earth Observing System (EOS) satellites and the forthcoming series of JPSS satellites. The mission will test key technologies and instruments for the JPSS missions.There sure are some shiny surfaces on that spacecraft -- it should produce good flashes when it's in the right geometry. And I'm always surprised to see how large Earth-orbiting spacecraft are. Since they don't need to escape Earth's gravity, the same rocket can launch much more mass to Earth orbit than it can to escape Earth and travel to, say, Mars. The only launch I've ever witnessed live is Spirit's, which was also a Delta II, though a slightly different configuration. Here's Spirit at a similar moment in its mission; it was such a squat little spacecraft compared to NPOESS, inside a similarly squat fairing. 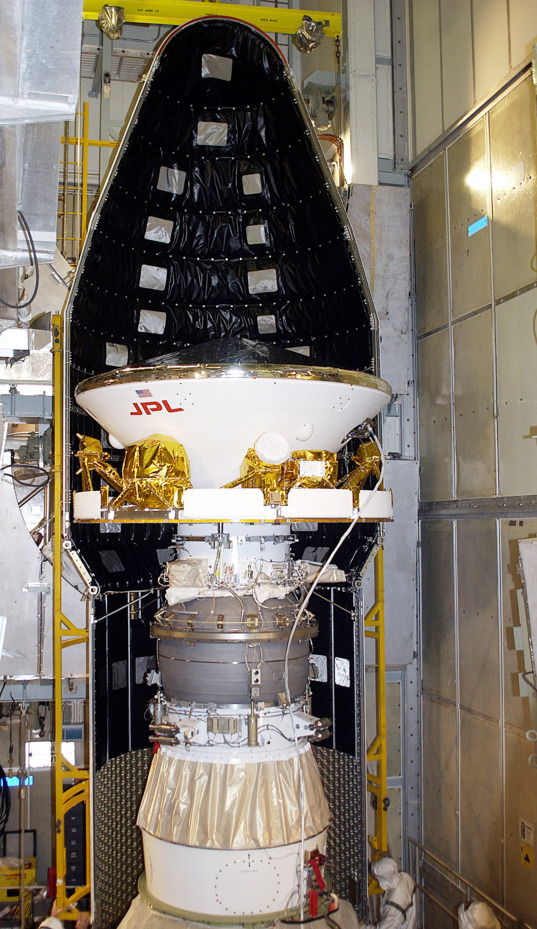 At Launch Complex 17-A, Cape Canaveral Air Force Station, on May 31, 2003, the first half of the fairing for the Mars Exploration Rover 2 (MER-2, also known as MER-A or Spirit) is seen behind the spacecraft.

Here's a diagram of NPP to compare that photo to: 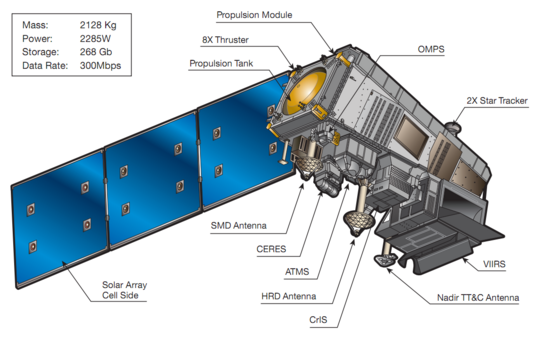 OK, so that's NPP: what's a Tweetup? It's just a media event designed especially for Twitter users. They are organized differently from media events for print and Web journalists. For people who write for newspapers or blogs, you set up an event where top mission people (scientists and managers) talk for half an hour about what the mission is and what to expect on launch day, allow the reporters to ask questions, and then expect them to go home to write and then file their stories. Twitterers report tiny amounts of information in real time, so a Tweetup works best as a longer event, with access to mission people one at a time and more informally rather than on a panel, with wireless Internet access continually available to participants. I'm guessing that NASA and Vandenberg also see the event as an opportunity to promote completely unrelated things. But I've never yet attended a Tweetup so I don't know quite what to expect. I do know that NASA has been incredibly successful at using Twitter as a medium for publicity.

Boy, do I hope NPP launches when scheduled! Regardless of whether I do actually get to see the spacecraft go up, though, I am very excited about the opportunity to get inside Vandenberg and see what the Air Force wants to show off there. I grew up only half a mile from an Air Force base (Carswell AFB in Fort Worth, Texas, now a training location for the Naval Air Reserve). I used to climb out my bedroom window onto the roof to watch planes practicing their takeoffs and landings -- the screaming F4's with their low-sloped tails, the enormous and loud B-52 bombers with their eight wing-mounted jet engines, and the only slightly smaller but even louder KC-135 refueling tankers. Periodically there'd be an air show and the Thunderbirds or Blue Angels would come and fly formation patterns right over my house. I think that the only thing cooler to my 14-year-old-self than having an Air Force base as a neighbor would be having an Air Force base and spacecraft launch facility as a neighbor. (As for my 37-year-old self, I'm happier with the neighbor I have now, a much quieter general aviation airport.)

I will post a timeline of launch events next week, before I leave for the Tweetup. In the meantime, here are some places to learn more about the mission and follow its preparations.

The NPP website is a good place to go for current mission status, but even better is Spaceflight Now, with their live-updated NPP Mission Status Center. Also useful are the @NASANPP and @NASAKennedy Twitter feeds. (Yes, Kennedy. They're really following the status of this Vandenberg event closely.)

There are PDF press kits with all kinds of background information about the mission and the launch from NASA and United Launch Alliance (Delta II manufacturer). If the press kits are too much for you, there's a NASA brochure and a Ball fact sheet. For pretty pictures, the Kennedy Media Archive has a gallery devoted to NPP.