Cassini has completed two very close flybys of Enceladus in less than three weeks, one of them just this morning, and the images from that encounter have already arrived on Earth. For the extra-close, 99 kilometer October 1 flyby, the fields and particles instruments were controlling Cassini's orientation during closest approach, taking data on the plumes. On the more distant, 1231-kilometer flyby today, it was the optical remote sensing instruments that were prime.

I checked out the Cassini raw images page and -- well, see for yourself. Every time I saw something cool, a click of the mouse brought me to something even cooler. Before I knew it I had spent two hours fiddling with raw images. Here are the results.

First, an animation taken over the night side of Enceladus as Cassini approached. Saturn photobombs!

Cassini approached for its 19 October 2011 flyby of Enceladus from almost directly behind it -- only the faintest sliver of crescent is illuminated. In the background, Saturn's crescent sweeps past as Enceladus grows in Cassini's view.

Next, from a bit closer, a moody view of Enceladus on approach, with the rings behind. I didn't want to waste very much time in careful alignment of the individual channels, so this is not my best color work; consider it a preview of much better images to come, once these data are formally released. 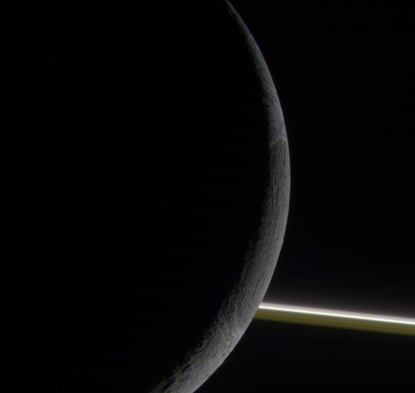 Enceladus poses in the foreground with an extremely foreshortened view of Saturn's ring system in the background as Cassini approached for its flyby on 19 October 2011. The color is composed of data taken through clear, green, and ultraviolet filters.

Next up, a really fine data set -- five footprints covering an incredibly skinny Enceladus crescent. This one you must enlarge to appreciate properly. The upper part of the crescent (actually the lower part of Enceladus -- south is to the left in this view) is a patchwork of parallel fractures, some sets going one way, others going a different way. Then you get down (up) to the northern end of the crescent and much more densely cratered terrain. The insides of the craters are brightly lit by light reflected off of the crater walls that we can't see, the ones that are facing the Sun. 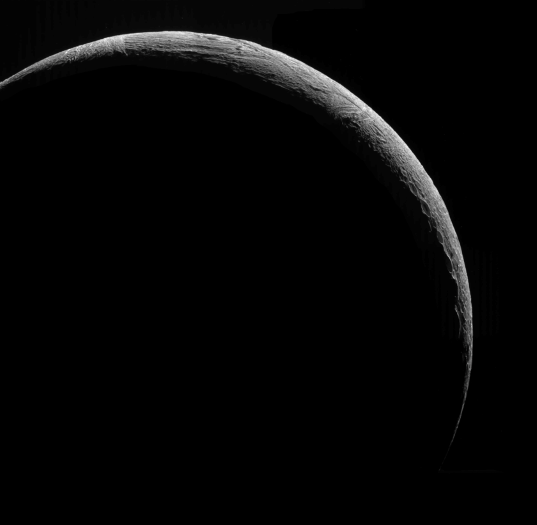 A five-image mosaic on a crescent Enceladus taken as Cassini approached it on 19 October 2011.

Right around closest approach, Enceladus passed into Saturn's shadow. So the camera couldn't do much, but the thermal imaging spectrometer could take data on the heat emanating from the south polar tiger stripes without the confounding influence of solar illumination. The camera picked up the action again as Enceladus emerged from eclipse.

For a few years around equinox, Enceladus passes through Saturn's shadow once each orbit. Several of Cassini's flybys of Enceladus happened near the time Enceladus was in eclipse. These photos were taken as Enceladus emerged from Saturn's shadow after the 19 October 2011 flyby.

I had used a batch downloader to get these images, and it ingested many more pictures that went farther back in time, to the previous flyby on October 1. And if you think the eclipse animation above was neat, I've got something doubly neat. On October 1, Cassini took a similar set of images of Enceladus as it emerged from Saturn's shadow. But this time it was photobombed by Titan. There are a couple of things that make this animation especially weird. First of all, Enceladus seems to pop into existence out of thin air, because Titan is not in eclipse when Enceladus is; Titan is under the same illumination conditions throughout the animation. Second, Titan looks so dinky! This is just because of perspective, of course; Cassini is way closer to Enceladus than it is to Titan, so Enceladus looks much larger even though it's only a tenth Titan's size. After I had put this together I thought it just looked wrong for Titan to be gray, so I artificially colorized it, painting Titan with its usual smoggy orange color. Enceladus is pretty close to white, so I left it alone.

Enceladus in eclipse; Titan, not

After the 1 October 2011 flyby, Cassini watched Enceladus come out of Saturn's shadow. Behind Enceladus, a much more distant Titan is not eclipsed. Titan has been artificially colorized in this animation.