I consider October and November to be book review season. We're well out of the mental coasting of summer and have gotten into the groove of school and work in fall, and are in the relative quiet before the insanity of the season that stretches from Thanksgiving to the New Year, when much of the Western world will be scrambling to shop for presents for friends and family. In the past I've delivered most of my book reviews in single posts in early November, but I've received so many great books and other products to review this year that I'm going to have to pace myself and do a few per week throughout this season. Since there's so many and there's only so much of my time (and only so much of my blog that I'm willing to devote to reviews) I will mostly only mention things that I am actually willing to recommend, or at least find interesting to write about. So if you notice that most of my reviews are raves, it's not because I have no standards, it's because I am not bothering to write about the stuff I don't really like. (An exception will be children's books, which are quick enough to read that I probably will mention some that didn't work for me.) 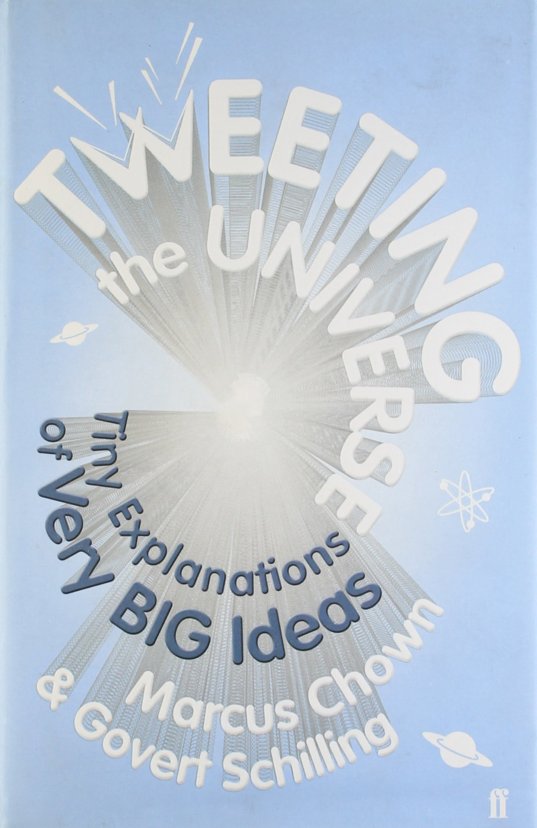 So this week's review is of two books that deliver lots of facts in little chunks. The first is Tweeting the Universe, by Marcus Chown and Govert Schilling. This book has the clever conceit of "answering 140 of the biggest questions in physics, distilling the essence of each subject into tweets of 140 characters." As any writer will tell you, it is much harder to write a short article than it is to write a long one. We Tweeters are now producing 200 million tweets a day, most of them dashed off in seconds, but to craft meaningful explanations of important physical concepts in stand-alone sentences of 140 characters or fewer is an arduous writing task, with each and every Tweet its own entity rich with meaning, like a haiku. I commend Chown and Schilling for managing to complete the project at all!

If you want to see an example of what Tweeting the Universe's text looks like, look no farther than Govert's Twitter feed. Each Friday evening (CEST -- Govert is a Dutch writer), he Tweets one chapter of the book. Here's the complete chapter from October 7:

Here we go. Question of today: How do we know the age of the Earth?

Question of the Earth's age is bound up with age of the Sun, since Sun cannot be younger than Earth (or the Earth would have frozen solid).

In the 19th century, in a world powered by steam, it was obvious for physicists to wonder: is the Sun a giant lump of burning coal?

5000 years was too little even for Irish Archbishop Ussher, who deduced from Bible Earth was created Sunday 23 October 4004 BC - at 9 am.

Geology and biology tell us that the Earth must be at least hundreds of millions of years old. Has taken ages for mountains to rise up...

... and for living things to evolve from a common ancestor. Physics also has something important to say about the age of the Earth...

Radioactive uranium in rocks decays into lead at a known rate, so ratio between two can be used as a 'clock'. Earth billions of years old.

In 1907, American physicist Bertram Boltwood radioactively dates rocks from Sri Lanka and finds they are a whopping 2.2 billion years old.

In fact, oldest rocks found on Earth are about 4 billion years old. But the Earth, of course, must be older still. The question is: how old?

Best age comes from radioactive dating of meteorites, builders' rubble left over from the birth of the Solar System: 4.55 billion years.

So the Sun and the Earth are about a third as old as the Universe, which burst into being in Big Bang about 13.7 billion years ago.

Sun has been burning million x longer than it could if it was made of coal. So energy source must be million x as concentrated as coal.

An energy source million x as concentrated as coal exists: nuclear energy. Sun is "fusing" hydrogen into helium. The byproduct is sunlight.

That was it! This and 139 other questions are covered in our book 'Tweeting the Universe'. See bit.ly/plWHwG for more information.With all this distillation, it's a dense book, unleavened by photos, and I doubt that most people who pick it up will read it, in order, cover to cover. Like a book of poetry, it's impossible to grasp if read that way. Rather, it's the perfect sort of thing for a few minutes' read at a time -- shuffle through the pages until you find a question that interests you, and study closely the dozen or so refined nuggets of fact that these two experienced science writers have produced from the vast body of scientific research that they cover each and every day.

(I received a complimentary copy of this book from the publisher.) 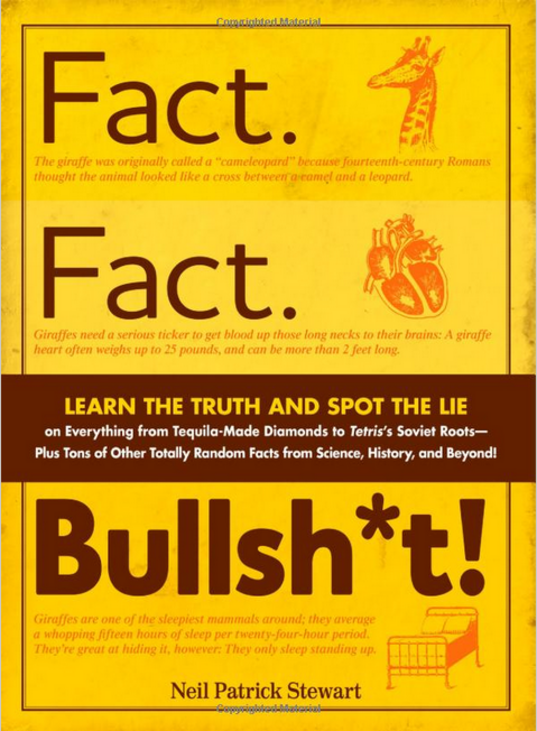 The other packed-full-of-fact book is Fact. Fact. Bullsh*t!, by Neil Patrick Stewart. This is not strictly a space or even a science book, but it contains plenty of science and space information in often unexpected places. This book, too, has a conceit: each odd-numbered page contains three statements on some topic, two of which are true, and one of which is false. The challenge to the reader is to guess which one is false. When you turn the page and read its back, not only do you find out the correct answer, but you're treated to fuller explanations behind the veracity of the three statements, with the explanations just as informative and edifying about the false statements as they are about the true ones. This is the only reason the book works for me, because it not only identifies wrong answers, it educates you beyond that.

Here's an example of a false statement and the correction from the following page, which displays the author's signature brand of humor. It's from a page titled "CONFUCIUS!"

The philosopher Confucius said, "the only things to come to a sleeping man are dreams," "even the genius asks questions," and "death is not the greatest loss."Bullsh*t! Those quotes belong to the philosopher (and "thug life" rapper) Tupac Shakur. Quotes that are attributed to Confucius include: "Have no friends not equal to yourself," "The accomplished scholar is not a utensil," "The man of perfect virtue is cautious and slow in his speech," and "Without knowing the force of words, it is impossible to know men."

There is plenty of science and space in this book, and I can attest to its quality, because I reviewed its chapter on Science. The Planetary Society's Phobos LIFE project is even mentioned on page 207. Oh, I should probably mention that the author is my brother. It's his first book. I'm actually amazed by how much science it contains. In our extended family, which is chock-full of engineers plus scientists and a doctor, my brother is considered the dreamy arty guy (his Master's degree is in performing arts). So I was surprised and then amused to learn from the toasts made by Neil's friends at his wedding reception last June that among their group, he's the geeky intellectual. He plays both sides of that personality in every chapter, with all the humor and clever misdirection backed up by careful research. Buy my brother's book! Buy ten copies!