What's up in the solar system in October 2011

Without a doubt the most exciting events in space in October are Cassini's two, count them, two extremely close flybys of Enceladus, spaced only eighteen days apart, on October 1 and 19 (and followed by a third one on November 6). Just to make things more interesting, Saturn (and, therefore, Cassini) will be going in to solar conjunction in between the two flybys. Meanwhile, I'll be reporting from one of the year's big planetary science meetings in Nantes, France, all next week. Highlights include the first scientific presentations from Dawn at Vesta on Tuesday afternoon and early MESSENGER orbital science results all day Wednesday, but there are exciting sessions all week on every part of the solar system. Stay tuned for that! 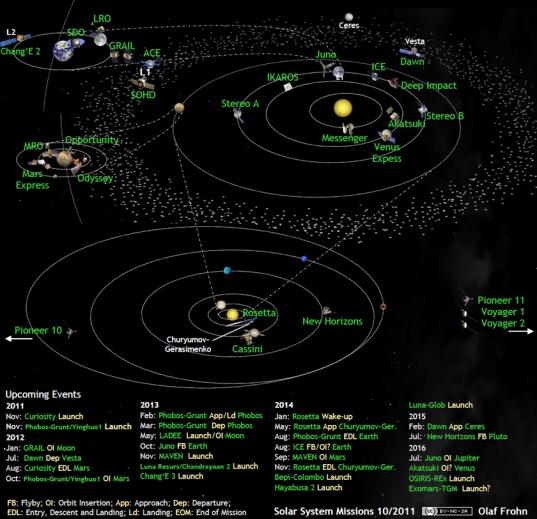 Phobos-Grunt and Yinghuo-1 have completed thermal vacuum testing and is reportedly being shipped to Baikonur today in preparation for a November 3 launch, though RussianSpaceWeb is reporting that the launch date has slipped by two days. Phobos-Grunt will enter Mars orbit in September or October of 2012, then send Yinghuo-1 on its way on a Deimos-crossing, elliptical, equatorial orbit. Phobos-Grunt will land on Phobos in February or March 2013, and lift off from Phobos a few weeks after, returning to Earth in August 2014.

NASA's next great rover Curiosity, or Mars Science Laboratory, is scheduled for launch no earlier than November 25 and will land in August 2012. Its nominal mission will last one year but it should go on much longer. There still isn't a dedicated MSL section of the Kennedy media gallery. The most recent photos (like this one) show the backshell being stached on top of the rover and descent stage. Curiosity will be landing in Gale crater next summer.

NASA's MESSENGER spacecraft is well into its primary science phase, and recently released their first batch of data from their primary science phase. As usual the image magicians at unmannedspaceflight.com are finding interesting features. There is a press briefing today about a special issue of Science containing several papers representing the first science from Mercury orbit. Watch their gallery for regular image releases..

The twin spacecraft of NASA's GRAIL mission launched successfully on September 10. They're now cruising to the Moon; GRAIL-A will arrive on December 31, 2011, and GRAIL-B on January 1, 2012. Their mission to map the Moon's gravity field will last for only 82 days. The mission is looking for new names for the two spacecraft, and has invited American students in grades K-12 to enter a naming contest.

China's Chang'E 2 lunar orbiter has arrived at L2, the Lagrange point on the far side of Earth from the Sun. More recently, it returned data from three instruments (not the camera) from its position at L2.

NASA's NASA's Lunar Reconnaissance Orbiter is busily mapping the Moon from its science orbit. One of my recent favorite images from their gallery is this one featuring a pile of boulders clustered at the base of a crater's central peak, with boulder trails leading away on both sides.

Out at Mars, the autumnal equinox has passed in the southern hemisphere, just as it lately did in Earth's northern hemisphere. (It's currently Ls 7.9.) Opportunity's sol 2730 is now drawing to a close. The rover has its Mössbauer spectrometer pointed at a very soft rock named Chester Lake. While waiting for the 10-half-lives-old cobalt source to make enough gamma rays for the Mössbauer to get a decent signal, the rover is taking color photos of the scenery. Here is Eduardo Tesheiner's latest route map and Google Earth kml file for Opportunity.

ESA's Mars Express is carrying on with an extended mission, planned to run through 2014. One set of few Mars Webcam images came down in September. They recently released a really pretty photo showing Eberswalde and Holden, two of the runners-up in the Curiosity landing site selection process.

NASA's Mars Reconnaissance Orbiter is keeping an eye on Mars' weather with MARCI; they report scattered water ice clouds but mostly clear skies for Opportunity. As I write this entry, the HiRISE camera is coming back online after going into safe mode on August 27; it sounds like they're planning on resuming imaging tomorrow. As always, check in on the latest captioned image releases from HiRISE for your dose of spectacular photos. Among recent releases is this one showing a leveed channel on a crater wall, which formed when lava was flowing across the landscape, partially filling in the crater.

NASA's Mars Odyssey is now the longest-lived spacecraft ever to operate at Mars. You can see the latest from its THEMIS instrument here. This recent picture is another featuring a lava channel.

Today, NASA's Dawn spacecraft entered its High Altitude Mapping Orbit (or HAMO) at an average of 660 kilometers above Vesta. From this vantage point it'll acquire its most detailed global map of the asteroid yet. timeline summarizing the Vesta phase of the Dawn mission..

The NASA-ESA-ASI Cassini is midway through Rev 154, shooting inward toward Saturn and the first one of back-to-back-to-back flybys of Enceladus on October 1 and 19 and November 6. Before the October 1 flyby, they'll be getting a 6-hour rotation movie on Dione. For the extra-close, 99 kilometer October 1 flyby, the fields and particles instruments will be "prime" during closest approach, taking data on the plumes. On the more distant, 1231-kilometer flyby on the 19th, it'll be the optical remote sensing instruments that are prime, with CIRS taking the temperature of the tiger stripes while Enceladus is in Saturn's shadow; UVIS will watch one of the stars in Orion's belt (epsilon Orionis) twinkle through the plume. Because Rev 154 and 155 are both in the plane of Saturn's rings, there will be lots of "mutual event" observations. Cassini will also hunt for clouds on Titan. To see what Cassini's doing when, check out my long and detailed page on Cassini's tour of the Saturn sytem.

NASA's New Horizons has 11.1 AU to go to reach Pluto. There are 1383 days left until Pluto closest approach. It's on course for a January to July 2015 encounter with the Pluto and Charon system. Go to icehunters.org to help search for Kuiper belt targets for New Horizons!

Juno spacecraft is outbound from the Sun. It'll go well beyond Mars' orbit before it heads sunward again. An Earth flyby in August 2013 will send it on to a July 2016 Jupiter arrival.

JAXA's Akatsuki is now in solar orbit, on its long cruise to a second encounter with Venus. JAXA has tested the main engine and found that it produces very little thrust, only one ninth of its original full power. They are now considering how to insert the spacecraft into a Venus orbit from which they can do any useful science.

JAXA's IKAROS flew past Venus in December and has been operating successfully since May 21, 2010. Follow the IKAROS blog to keep up with its contacts with Earth; the last one was today.