Since Cassini currently orbits Saturn within the plane of Saturn's rings -- a plane that also contains the orbits of most of its moons -- it has lots of chances to catch two or more moons in the same photo. One such "mutual event" happened on September 17, featuring four moons: Titan, Dione, Pan (a mere dot within the Encke gap in the A ring), and Pandora. 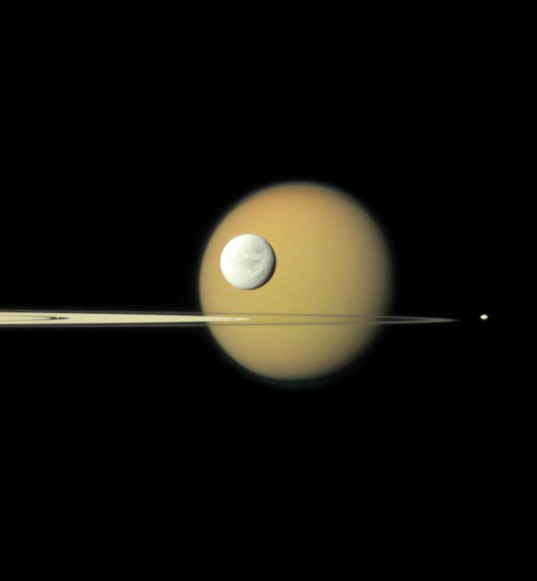 Cassini usually takes 10 or 20 images during a mutual event, which helps scientists refine their understanding of the moons' orbits. The big moons' orbits have been fairly well understood for a long time, but there are a lot of masses in the Saturn system doing a lot of moving around, exerting little tugs this way and that way and shifting the moons' paths away from perfect Keplerian ellipses. Here's an animation I put together from the sequence I show above. In order to understand better the motions of the moons, I fixed the position of the rings and allowed the camera frame to drift through the animation. The moons' brightness appears to flash because Cassini was cycling through different-color filters (red, green, blue, red, green, blue...), and nearly everything in the Saturn system is darker at blue wavelengths than red or green. Titan is especially dark when seen through the blue filter.

On 17 September 2011 at about 1200 UTC, Cassini pointed at the mid-sized moon Dione and watched as it transited Titan while the rings and two small moons passed by. Pan is a tiny object orbiting within the A ring's Encke gap, while Pandora is the outer shepherd satellite of the F ring.

Titan and Dione both are on the far side of the rings from Cassini, and Dione orbits Saturn faster because it's closer to Saturn. Pan appears to be moving rather slowly at first because it's rounding the corner of the Encke gap; most of its motion is perpendicular to the image frame. It appears to accelerate as it travels around Saturn, but of course its orbital speed is almost invariant with time -- it's just a foreshortening effect. Finally, Pandora is the only moon that's closer to Cassini than the rings in this animation.

There's also an interesting optical illusion happening. Check out the F ring -- see how it crosses Titan? It's darker than Titan, but brighter than black space. To my eye, it looks like the F ring varies in brightness -- like it really is darker where it crosses Titan, compared to its appearance at the ansa. But that's an illusion. In fact, the ring is brighter where it crosses Titan than at the ansa. Our brains see the contrast with the background and make us believe that we're seeing things that just aren't true!

This neat animation was just one of four that Cassini captured on the 17th. Here's a little movie showing all four:

Cassini captures "mutual event" movies to refine the precision with which we know the orbits of Saturn's moons. On 17 September 2011, Cassini took four such movies in rapid succession: Tethys with Titan at about 0100 UTC; Rhea with Titan at 0130; Enceladus with Titan at about 1030; and, at the end, at 1200, a movie with Titan, Dione, Saturn's rings, Pandora, and Pan.