I'm getting back to my notes from Day 2 of the New Horizons meeting again, which I seem to be posting in dribs and drabs! Jeff Moore's presentation was cool because of the discussion it stimulated. He considered what exogenic processes might be operating on Pluto's surface. What's an exogenic process? It's something that modifies the shape of the surface from the outside, and doesn't require the body to be geologically active inside. Titan and Earth are two examples of places where exogenic processes, including river erosion, lake sedimentation, and windblown sediments, are mostly responsible for what we see on the surface. Moore got a laugh from the audience when he put up a picture of Titan's river channels as a possible analog to Pluto, but his point was that until we get there, we don't know exactly what to expect. 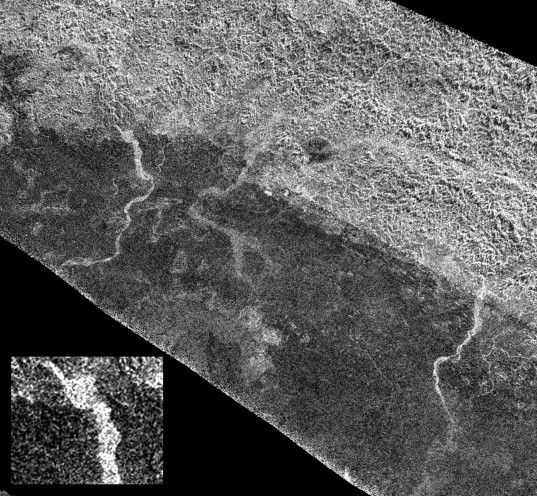 This is a small segment of a long RADAR image captured by Cassini on its 28 May 2008 flyby. It shows terrain to the southwest of the bright region called Xanadu; Xanadu is to the upper right, plains to the lower left. Channels cut across the incised terrain of Xanadu and pour out onto the plains.

After Jeff Moore's talk, Jeff Kargel stood up and suggested that liquid nitrogen or neon could potentially flow across Pluto's surface, at least at some times of its year. Then Will Grundy pointed out that nitrogen ice is "a fantastic insulator," so even if liquid nitrogen doesn't flow on the surface, it's quite conceivable that it could be flowing not very far down below the surface. If it's not very far down, it wouldn't take much for some other process to excavate those deposits and make them visible from space. Alan Stern pointed out that impacts on Pluto would happen at 1-2 kilometers per second and would be expected to "locally fluidize" the nitrogen ice. Then Bill McKinnon said that if the impact is big enough, it could briefly increase Pluto's atmospheric pressure and you could have an episode of global nitrogen rain.(!) Leslie Young said that at 50 to 60 Kelvin, methane gets locally slushy, and you could have features that result from that. Murthy Gudiapati countered some of this enthusiasm, saying that if you don't get enough local atmospheric pressure, nitrogen will never go into a liquid phase. Alan said that now this felt more like a workshop!

Discussion continued. Jeff Kargel wanted to come back to his liquid neon suggestion. Alan recalled that there was a paper in Icarus in the 1970s that considered the escape of neon, molecular oxygen, and other exotic volatiles in a putative Pluto atmosphere. But, he said, at the time that paper was written, we didn't know Pluto's mass, so the work is "probably worth redoing." Someone else had been busy with an abstract search and found the paper, written by Michael Hart in 1974. Kargel asked if anybody recalled a paper about neon puddles on Eris. Will Grundy and Murthy Gudiapati tried to talk Kargel down from his persistent interest in neon. Because the discussion was winding down, Alan suggested they move on to the next talk....