Opportunity views Mars in 3D. So did Spirit, of course, and Phoenix, and Pathfinder, and so will Curiosity. But I'm not aware of half-hour 3D educational films made from any of their images (I would love to be wrong about that, so if I am, please correct me in comments or email). There's one Mars landed mission for which there is a long 3D film, and that's Viking. Grab your 3D glasses, and be prepared to be transported to Mars.

Mars in 3-D is a stereographic film of imagery taken by the NASA Viking 1 and 2 spacecraft from both Mars orbit and on the surface, from both lander locations, between 1976 and 1979. The original film was produced at Stanford University in 1979 using 16mm film. It is a valuable and unique historical presentation of the results of one of the United States' most important space achievements of the decade following the Apollo moon program. The film reels and related materials were eventually donated to the NASA archives at Ames Research Center in Mountain View, CA.

Actually, though, my favorite segment of this video is not one of the parts that were shot on Mars; it's the segment that shows the engineering model of the Viking landers using its telescoping arm to sample soil and deliver it to its instruments. Other bits from that segment show the nodding motion of the mirror in the weird analog scanning cameras that the Vikings used to examine the surface. I learned much about how the spacecraft functioned that I never knew before. 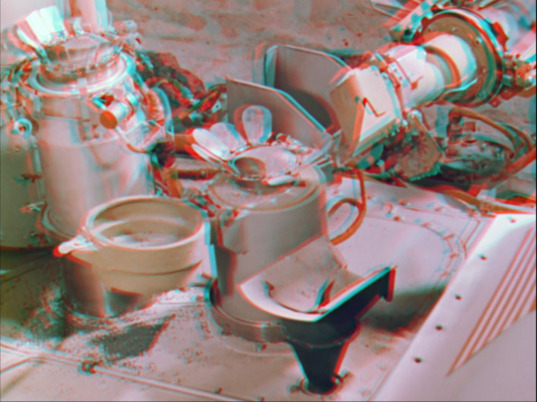 Mars in 3-D is a stereographic film of imagery taken by the NASA Viking 1 and 2 spacecraft from both Mars orbit and on the surface, from both lander locations, between 1976 and 1979. The original film was produced at Stanford University in 1979 using 16mm film.

And then of course there's the soundtrack. My daughter called it "spooky" -- it's wonderful vintage synthesized music, originally produced on an analog synthesizer, created using one of the very first digital hardware synthesizers, the Systems Concepts Digital Synthesizer, a one-of-a-kind device commissioned by Stanford's Center for Computer Research in Music and Acoustics. It was recently remastered using a software simulator. The composer, Michael McNabb, explains the film and its restoration in detail on his website -- here's an excerpt:

In 2009, CCRMA [the Center for Computer Research in Music and Acoustics at Stanford University] proposed a concert to honor its founder and former director, Professor John Chowning, who proposed to present the concert in a movie theater and include the Mars in 3-D film. However, using 16mm projection with the original reels was out of the question due to the degraded quality of the film and soundtrack, and difficulty using outdated 16mm stereo technology. So, with the cooperation of NASA/Ames we began an effort to find, restore and convert the film to modern Digital Cinema format and 5.1 surround audio, for presentation using current 3D cinema projection technology. Several copies of the 16mm left and right film reels, as well as the original narration audio tapes, were located at NASA Ames. These were then scanned to HD video.

The original quadraphonic surround music has been re-synthesized using a software emulator, built by Mr. Schottstaedt, that exactly reproduces the functionality of the hardware synthesizer we used in 1979. This, along with digitized copies of the original narration recordings, were used to create a new 5.1 surround audio soundtrack. The restored version of Mars in 3-D will be available in Digital Cinema 3D format in Q3 2011. An anaglyph version will also be available for download or web streaming.