What's up in the solar system in September 2011

September is going to start with a bang: the twin GRAIL spacecraft are set for launch on September 8. I would love to be able to attend the launch but my older daughter's first day of kindergarten is September 7! That's a launch of a different kind. Opportunity will continue to explore the rock garden that forms the rim of Odyssey crater, and Cassini will have flybys of Titan, Hyperion, and Pallene. And for people within an easy drive of the Pasadena Convention Center, I'll be speaking at the Pacific Astronomy Trade Show on September 18. 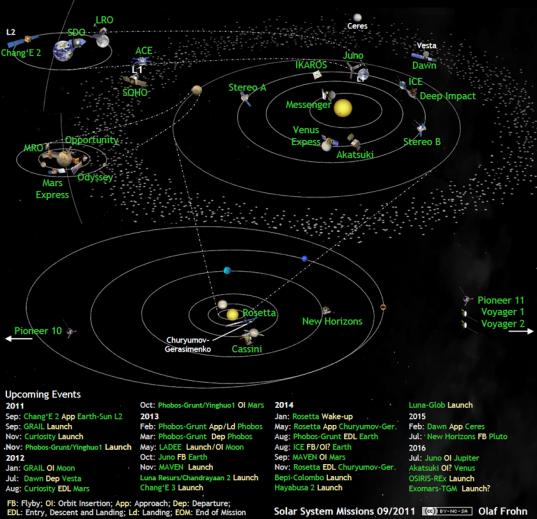 The twin spacecraft of NASA's GRAIL mission are due to launch no earlier than September 8. After a three- to four- month cruise, they will operate in lunar orbit for 90 days. Visit the GRAIL section of the Kennedy media gallery to watch it come together. The latest images are a week old and show the spacecraft being hidden inside the fairing (nose cone) of the rocket. Via Twitter I hear that the Flight Readiness Review is under way as I write.

Phobos-Grunt and Yinghuo-1 have completed thermal vacuum testing and will reportedly ship to Baikonur at the end of September in preparation for a November 3 launch, though RussianSpaceWeb is reporting that that date has slipped by two days. Phobos-Grunt will enter Mars orbit in September or October of 2012, then send Yinghuo-1 on its way on a Deimos-crossing, elliptical, equatorial orbit. Phobos-Grunt will land on Phobos in February or March 2013, and lift off from Phobos a few weeks after, returning to Earth in August 2014.

NASA's next great rover Curiosity, or Mars Science Laboratory, is scheduled for launch no earlier than November 25 and will land in August 2012. Its nominal mission will last one year but it should go on much longer. There still isn't a dedicated MSL section of the Kennedy media gallery. The most recent photos are more than two weeks old. Curiosity will be landing in Gale crater next summer.

NASA's MESSENGER spacecraft is well into its primary science phase. I chatted with team member Louise Prockter at the meeting I'm currently attending, and she reports that the geologists are finding absolutely fascinating stuff in every image. This month will be their first release of data from Mercury orbit, covering the first two months of operations. Watch their gallery for regular image releases..

China's Chang'E 2 lunar orbiter has arrived at L2, the Lagrange point on the far side of Earth from the Sun. The report from the Xinhua news agency states it arrived at 11:27 p.m. Beijing time (14:27 UTC) on August 25, after a 77-day cruise.

NASA's NASA's Lunar Reconnaissance Orbiter is busily mapping the Moon from its science orbit. I'm sorry I haven't been featuring more of the wonderful images they're selecting for their gallery -- I need to do better. A couple recent favorites are fascinating flow-like features on the walls of relatively recent craters, like Space Calendar: