Everybody says we need a NEO survey telescope

It's rare to hear scientists and human exploration people agreeing on anything, but that's what I've been hearing this week, from two different sources. The point of agreement: the next thing needed by both the small bodies science community and people interested in human exploration is a space-based telescope capable of surveying (and following up on) near-Earth space for asteroids that, for a variety of reasons, haven't been found yet. It echoes a finding made in our Roadmap to Human Space Exploration, developed in 2008 to provide input to Washington in leading us out of the Shuttle era into a new one expanding the presence of humans across the solar system.

More recently, the recommendation for a survey telescope was the main conclusion of the recent Open Global Community NEO Workshop. This workshop was hosted by George Washington University's Space Policy Institute in February, but the workshop report has only recently become available (PDF, 1MB). Discussion at the workshop, which was attended by more than a hundred stakeholders, centered on the question: "What information about NEOs is still needed to support a robust, sustainable human exploration program?" The report states:

A primary conclusion by the participants is the need for a space-based survey telescope to greatly expand the catalog of accessible targets for human exploration. This critical asset should be considered as part of the basic infrastructure to enable human exploration beyond LEO. Such an asset could be rapidly developed and would have cross-cutting benefits across multiple NASA directorates and international space agency interests...

The paucity of viable candidate destination NEOs can be attributed to the fact that NEO observing assets are currently confined to Earth's vicinity. Historical analysis of past trajectory opportunities to NEOs has shown that some were highly accessible during the timeframes of their discovery, because they had to closely approach Earth in order to be detected. Assuming that only a small percentage of the total NEO population accessible to HSF is currently known, a better return on investment is realized by a comprehensive NEO survey based in deep space, rather than augmenting HSF capability to access only the currently known NEOs. Analysis shows a dedicated NEO survey has the potential to increase the number of known HSF-accessible targets by at least an order of magnitude. 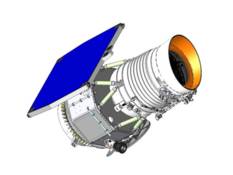 A survey telescope like WISE, placed in the right orbit, could help discover numerous possible targets for human exploration.

The report is pretty interesting, and recommended reading; it provides all kinds of ideas that make me fly off into imaginings of the stories that we may one day be able to tell about when astronauts left our Earth-Moon cradle and explored an asteroid (a future that, rightly or wrongly, I feel is more likely to come to pass in my lifetime than human exploration of the Martian surface).

Well, today I've been attending SBAG, the meeting of the NASA-sponsored Small Bodies Analysis Group. "Small bodies" is a term that captures an amazing diversity of objects from near-Earth asteroids to things in the main belt, Trojan satellites of the outer planets, and even beyond Neptune. The main conclusion of this body? The statement is in draft form and likely to be modified somewhat between now and the next meeting, but here's what they say:

SBAG endorses primary conclusion of the Target nEO Workshop report that a space-based survey telescope is a foundational asset that enables a robust and sustainable space exploration program.

To be fair, a lot of the people who were at that Target NEO workshop are also involved in SBAG. But I still find it striking that a group of scientists who study such a broad array of things across the solar system made the same finding as a group that was focused on human exploration of an asteroid.

Of course, if you look at the details the agreement isn't perfect. The human exploration people want to capture a specific set of near-Earth asteroids, ones with orbits that will be very easy to reach -- that is, cheap in terms of fuel, with short-duration missions. The small bodies community wants a broader survey and they don't just want to find and track these things, they also want to learn more about them. So the specific types of missions they advocate will be very different.

The Planetary Society has concurred on the need for a space-based survey telescope for a long time. In the meantime, we are doing what we can, with the support of our members, to help with followup studies of recently discovered near-Earth asteroids through our Shoemaker NEO Grant program.