Spirit Point and Odyssey crater in sight, and new rock under Opportunity's wheels

Opportunity is at her goal. In this 3D anaglyph, taken on sol 2678 (yesterday, August 6, 2011), Opportunity's wheels are resting on strange lumpy bedrock. The view to the left is the blocky ejecta of Odyssey crater, the name the team has given to the small (20-meter or so) crater punched in to the southern tip of Cape York, the lowest part of the exposed western rim of Endeavour crater. I don't know that Opportunity's ever seen driving terrain quite like this, but of course Spirit saw worse, so hopefully that experience will serve the team in good stead as they approach those long-sought layered rocks of Endeavour's rim.

That view is fantastic. You can easily see the separation between the brighter Cape York rim material and the plains that Opportunity's driving on. You can see the drop down and down toward the floor of Endeavour, and the fact that Endeavour has a central mound. You can see the rim of Endeavour arcing into the distance, and the rim of Iazu beyond that. And Opportunity's views are somewhat hazy right now because of the time of year -- it's dust storm season -- so even if she goes no farther, the views are likely to improve with time.

Here's a bit of the HiRISE image covering this spot to provide some context. Opportunity was sitting on the apron of bright bedrock surrounding the well-demarcated edge of Cape York. 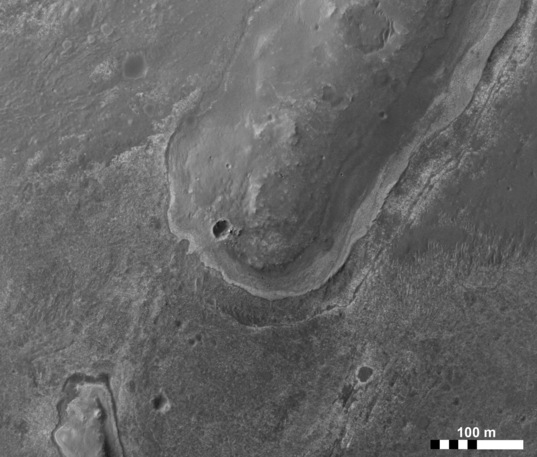 A view onto the southern part of Cape York, where Opportunity made landfall on the rim of Endeavour crater. The small (20-meter) crater on the tip of Cape York is named Odyssey.

Unfortunately, if CRISM data is any guide (and it should be, since CRISM data is what dragged Opportunity 20 kilometers across Meridiani), the clay minerals that the rover team really wants to see aren't likely to be found in exactly that spot; they're going to have to crawl uphill to reach the strongest signal. 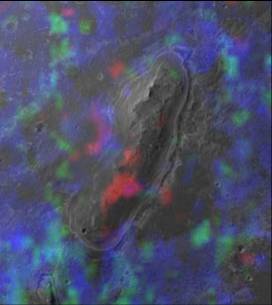 Meanwhile, the view to the south sure is pretty: 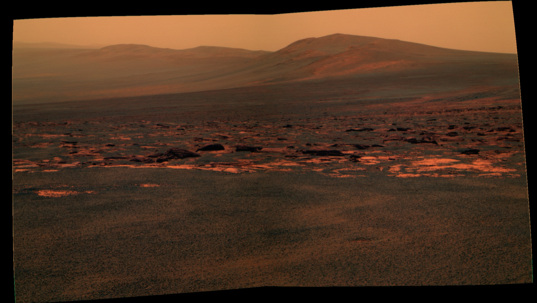