What's up in the solar system in August 2011

August is supposed to be a lazy summer vacation month, but there's quite a lot going on in the solar system. Opportunity has left the Meridiani dunes behind and is now just a few hundred meters away from making "landfall" at Cape York, part of the rim of Endeavour crater. It's been a long time since I've been this excited about the rovers -- it's really like Opportunity is getting to start a brand new mission at a new landing site. Meanwhile, Dawn is now in orbit at Vesta, sending back new images weekly as it spirals downward; once it reaches its survey orbit in a week or two it'll be returning data daily, from a new world of a type that we've never seen before. Also this month, Juno will launch toward Jupiter, while five other spacecraft get ready to ride rockets into space: the two GRAIL lunar orbiters in September, Phobos-Grunt and Yinghuo-1 in early November, and Curiosity in late November. And those are just the special events; MESSENGER, Venus Express, Lunar Reconnaissance Orbiter, Mars Odyssey, Mars Reconnaissance Orbiter, Mars Express, Cassini, and the Voyagers are actively sending back science data every day.

Before I go into mission-by-mission detail, here's Olaf Frohn's marvelous map of where all of our explorers are on August 1. The main change to this map since last month's is the addition of Hayabusa2 to the future missions list. 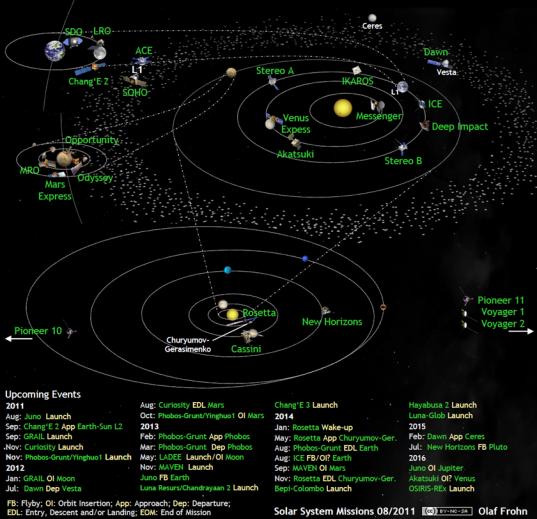 NASA's Juno spacecraft is on target for the opening of its launch period a week from today, on August 5. Launch windows are about an hour long each day; the first opportunity opens at 11:34 EDT (15:34 UTC). The spacecraft has been encapsulated and stacked on the rocket; it's very nearly ready to go. Check the Juno Mission Status Center at spaceflightnow.com for a live video feed and freqent updates on the preparations for launch. Visit the Juno section of the Kennedy media gallery for lots of pictures of the launch preparations. After launch, Juno will fly by Earth in August 2013 and then travel on to Jupiter, arriving in July 2016.

The twin spacecraft of NASA's GRAIL mission are due to launch no earlier than September 8. After a three- to four- month cruise, they will operate in lunar orbit for 90 days. Visit the GRAIL section of the Kennedy media gallery to watch it come together. The latest images show the spacecraft undergoing solar panel deployment tests.

Phobos-Grunt and Yinghuo-1 have completed thermal vacuum testing and will reportedly ship to Baikonur at the end of September in preparation for a November 3 launch. Phobos-Grunt will enter Mars orbit in September or October of 2012, then send Yinghuo-1 on its way on a Deimos-crossing, elliptical, equatorial orbit. Phobos-Grunt will land on Phobos in February or March 2013, and lift off from Phobos a few weeks after, returning to Earth in August 2014.

NASA's next great rover Curiosity, or Mars Science Laboratory, is scheduled for launch no earlier than November 25 and will land in August 2012. Its nominal mission will last one year but it should go on much longer. There isn't a dedicated MSL section of the Kennedy media gallery yet, but pictures are showing up in their hotpics section. We now know that it'll be landing in Gale crater next summer.

NASA's MESSENGER spacecraft is well into its primary science phase. A couple of days ago, they performed their second orbit adjustment, returning their orbital period to 12 hours (a previous periapsis altitude adjustment had shortened its orbital period to 11 hours 48 minutes). Watch their gallery for regular image releases. I like this image mostly because of the Pink Floyd reference in its title!.

China's Chang'E 2 lunar orbiter has completed its primary mission and is now en route to L2, the Lagrange point on the far side of Earth from the Sun.

NASA's NASA's Lunar Reconnaissance Orbiter is busily mapping the Moon from its science orbit. They continue to select really cool images to caption in their gallery. This one, of a volcanic cone on the farside, generated a lot of online discussion this week.

Out at Mars, it's late summer in the southern hemisphere. (It's currently Ls 336.3°.) Today it is Opportunity sol 2670, and Opportunity is so close to Endeavour, we can taste it. Look for frequent updates here on the increasingly awesome views Opportunity is getting of the interior of Endeavour. Here is Eduardo Tesheiner's latest route map and Google Earth kml file for Opportunity.

ESA's Mars Express is carrying on with an extended mission, planned to run through 2014. A few Mars Webcam images came down in June and show a skinny crescent Mars.

NASA's Mars Reconnaissance Orbiter is keeping an eye on Mars' weather with MARCI; they report that dust storm activity "picked up" last week, with local storms expanding over the course of several days into regional storms over equatorial and northern Mars; but Opportunity's skies have remained relatively dust-free ("somewhat hazy"), as have those over southern Mars. As always, check in on the latest captioned image releases from HiRISE for your dose of spectacular photos. Among recent releases is this one that shows some of the wacky south polar spiders; they actually released a stereo pair, so you can check out the spiders in 3D.

NASA's Mars Odyssey is now the longest-lived spacecraft ever to operate at Mars. You can see the latest from its THEMIS instrument here.

NASA's Dawn spacecraft is now in orbit at Vesta and is steadily lowering itself toward a target altitude of 2700 kilometers, called "Survey Orbit." This will kick off the formal science phase of the mission. It'll spend the rest of August in survey orbit. At the end of the month, it'll begin the process of lowering its orbit altitude again. There was a science team meeting at JPL all week this week, and they're putting on their first press conference since orbit entry on Monday, where I hope to see lots of cool new pictures!.

The NASA-ESA-ASI Cassini mission begins august in Rev 151, a three-week orbit in the plane of the rings. According to the Rev 151 Looking Ahead article, 151 is devoted almost entirely to observations of Saturn's northern hemisphere storm, but there are a few other highlights. Last week, the VIMS spectrometer was pointed at a start, HD 189733, and tried to observe two transits by its companion, a hot Jupiter exoplanet. There's an unusually close (6000-kilometer) nontargeted encounter with Rhea on August 1. Rev 152 begins on August 12, and has similar geometry to rev 151; that orbit will feature more Saturn observations and a pretty close (25,000-kilometer) nontargeted encounter with the lumpy moon Hyperion. To see what Cassini's doing when, check out my long and detailed page on Cassini's tour of the Saturn sytem.

NASA's New Horizons has 11.6 AU to go to reach Pluto. It's on course for a January to July 2015 encounter with the Pluto and Charon system. It's just completed its annual checkout and is returning to hibernation. There are 1445 days left until Pluto closest approach. Go to icehunters.org to help search for Kuiper belt targets for New Horizons!

JAXA's Akatsuki is now in solar orbit, on its long cruise to a second encounter with Venus. JAXA is preparing to test the spacecraft's main engine in September, to determine whether it is operable and, if so, if it fires straight enough to be used in a second orbit insertion attempt. If the main engine doesn't work, they will attempt to enter orbit using only the reaction control system, after jettisoning the now-useless oxidizer for the main engine. Current plans call for a trajectory correction maneuver when Akatsuki is at aphelion, either in November 2011 or June 2012. That will set Akatsuki up for an attempt at Venus orbit insertion in November 2015.

JAXA's IKAROS flew past Venus in December and has been operating successfully since May 21, 2010. Follow the IKAROS blog to keep up with its relatively infrequent contacts with Earth; the last one was today.