Following is the second half of Frank Trixler's report from the Origins 2011 conference -- my apologies to him for not posting it more quickly, as it's been sitting in my inbox for two weeks. Here is the first half. Trixler leads a research group at Technische Universität and Ludwig-Maximilians-Universität München, Germany. His research is on molecular self-assembly and prebiotic chemistry on mineral surfaces. He also runs a science outreach lab at Deutsches Museum. Many thanks to him for volunteering his time. --ESL

In this, my second blog on Origins 2011 in Montpellier, France, a conference dedicated to the interdisciplinary research on the origins of life, I aim to provide my impression of the second half of the conference. I will summarize a series of examples spanning almost the entire field of Astrobiology, starting with prebiotic synthesis of organic compounds and self-organisation of molecular systems, and moving towards more complex examples, such as fossilized life on Mars, aspects of sampling and the detection of possible extant life in the outer solar system.

George Flynn, from Plattsburgh State University, presented results of his investigation of interplanetary dust particles from both the comet Wild 2 (particles collected by the Stardust Mission) and Grigg-Skjellerup (samples from the stratosphere during a passage of Earth through its dust stream). His results indicate that the quantity of organics (more precisely, the ratio of organics to silicates) detected in both sources is significantly higher than in carbonaceous chondrite meteorites and that the organics consist of aliphatic hydrocarbons [hydrocarbons that are open chains, not rings; hydrocarbons where the carbon atoms form rings are called aromatic], C=C compounds (most likely carbon rings), and C=O compounds. With regard to prebiotic chemistry on the early Earth, he concluded that the delivery of such important organics to Earth's surface, via both cometary impacts and accretion of cometary dust particles, could have occurred in significant amounts.

A wide range of complex organics as building blocks is crucial for the emergence of life, and experimentally-supported hypotheses for astrochemical synthesis pathways and delivery scenarios to the early Earth - such as George Flynn's contribution -- are important contributions to the field of prebiotic chemistry. But how can these building blocks interact in such a way as to form functional complex systems and not just tar?

One fascinating example I would like to mention is the talk by Nicholas Hud from the Georgia Institute of Technology. This talk focused on small planar organic molecules -- Polyciclic Organic Hydrocarbons (PAH) derivatives -- and their possible role in the origin of the first RNA-like polymers. Hud's research addresses the fact that, without highly evolved complex enzymes, the abiotic synthesis of RNA from mononucleotides or short oligonucleotides is extremely unlikely. However, his experiments with planar PAH dyes indicate that these small hydrocarbons could have promoted the polymerization of the first nucleic acids.

How is it possible to find the first indications of life, after it had already emerged? Earth is geologically a very dynamic planet, destroying and altering old sedimentary rocks. Mars, however, could have preserved remnants due to its much lower geological activity. Jean-Pierre Bibring from the Institut d'Astrophysique Spatiale, France, principal investigator of the OMEGA instrument on Mars Express, gave an intriguing talk about where to look for remnants of life on Mars. He recommended looking at sites which were formed prior to the onset of the Late Heavy Bombardment (LHB) within the Phyllocian Period of Mars geology. He stated that all landers had so far explored regions which formed after the LHB. Even the proposed MSL landing sites, still under discussion, are even younger. He strongly suggests selecting landing sites with outcrops of clay minerals (their formation requires water-rich environments) as they can be found, for example, in Mawrth Vallis, one of the oldest valleys on Mars. 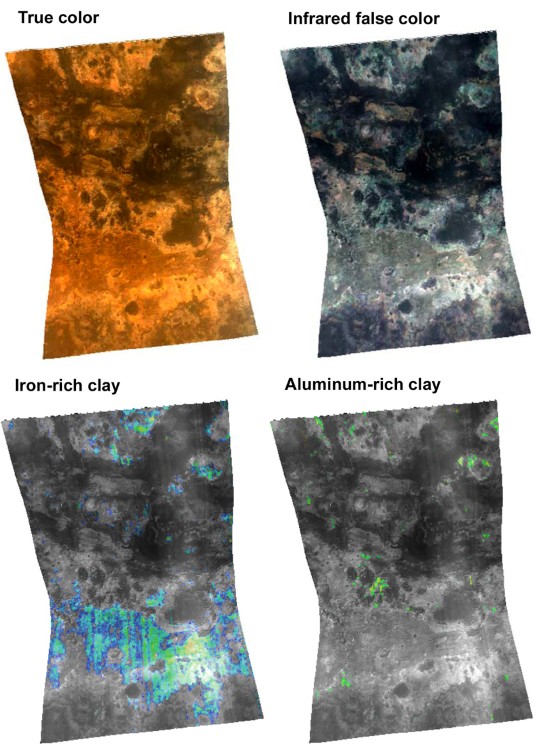 These maps of a region in Mawrth Vallis, Mars, were created from data captured by the CRISM spectrometer on October 2, 2006. It covers an area about 13 kilometers long and, at the narrowest point, about 9 kilometers wide. At the center of the image, spatial resolution is 35 meters per pixel. The leftmost image shows the view in approximately true color; the second image is the same region in a set of infrared wavelengths. The right-side images are maps of areas whose spectral properties match the spectral properties of minerals as measured in a laboratory on Earth. The first spectral map shows the distribution of iron-rich clays; the second spetral map shows the distribution of aluminum-rich clays. The iron-rich clays correspond with a layer of rock that is dark red in the true-color view and bright gray in the infrared. In addition, CRISM found previously undetected exposures of aluminum-rich clay, in a rock unit that is buff-colored in the true-color view, and bluish in the infrared view. Both rock types formed early in Mars' history, about 3.8 billion years ago. The difference in clay mineralogy reveals differences in the environment in which the rocks formed. Those differences may mean that the environment changed over time, or they may mean that there were local environmental variations on small scales, over distances of a few kilometers.

The probability that possible life on Mars was seeded via ejecta rocks from Earth is much higher compared to the probability that icy moons in the outer solar system with their liquid subsurface oceans were seeded. Kevin Hand from JPL pointed out that, although it is not completely impossible that a seeding of the icy moons happened, the extremely high impact velocity of the few possible ejecta rocks from Earh needs to be taken into account. In considering this velocity, he concludes that finding a separate origin of life in the outer solar system is a much more promising prospect. Hand compared the surface chemistry of the icy moons derived from spacecraft observations with his laboratory synthesis of organic molecules under simulated high energy radiation, temperature and pressure conditions prevalent on these moons. The conclusion: his totally abiotic synthesis of complex organic molecules is not distinguishable from decay products of irradating spores under the same conditions. This means that even when happy living cells are sprayed out from crustal cracks and land on the surface of the icy moons, we would not be able to determine whether these molecules are products of an abiotic photolytic synthesis or whether they are the decay products of the dead cells. After his talk, someone asked if isotopic signatures of samples could assist in distinguishing between abiotic and biotic origins. Hand answered that this would be possible if we fully understood the isotopic dynamics of the icy moons. Unfortunately, however, this is not the case.

But what if it were possible to sample extremely fresh material? At Enceladus, sampling such fresh material is possible by flying the space probe through its plumes which emerge from fractures on its surface. Based on their Cassini data, Postberg et al. have recently demonstrated that this method can provide significant evidence of a saltwater liquid reservoir which severely constrains non-liquid models.

A talk by Luther Beegle from JPL addressed some estimations of the ability of current instruments to detect possible extant life within the liquid water reservoir of Enceladus. He listed several constraints on the quantity of organic material that can be collected from an Enceladus plume. Calculating with optimistic parameters, he concluded that it may be possible to collect approximately 50mg of material during a fly-through. He compared the distribution of organic material within a bacterial cell and the organic component of terrestrial sea water to an average micron-sized particle of the Enceladus plume, in order to provide an estimation of the instrumental sensitivity required for detection of life. In his estimation, he also considered spatial heterogenity and the stochastic nature of samples. His main conclusion is that, without significant advances in detection and quantifiaction techniques, the only feasible approach to detecting possible life would be to carry out a sample return mission.

This animation is composed of 30 frames captured as Cassini swooped toward its targeted flyby of Enceladus on 13 August 2010. The images have been inverted so that the south pole appears as the "ground" below Cassini. Its active geysers are erupting into south polar winter darkness, but rise into daylight above Enceladus' surface.

Origins 2011 was the inaugural conference run jointly by the International Astrobiology Society and the Commission 51 of the International Astronomical Union. Combining their triennial conferences was an experiment, carried out in order to determine how the two organisations could work together, despite the differences in the languages spoken by Astronomers and Biologists. For me, the success of this experiment was made evident by the intense exchange of ideas and questions between experts from a highly diverse range of fields after the talks, during the coffee breaks and the poster sessions. 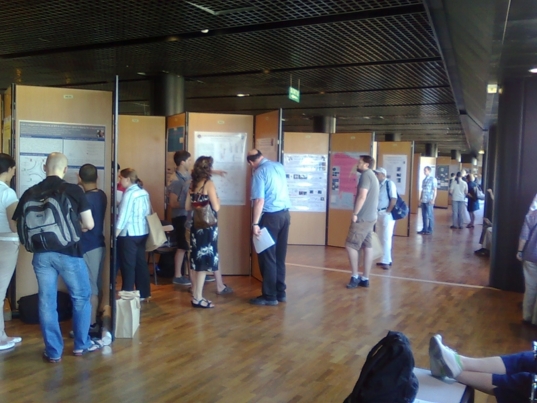 Impression of a poster session during the Origins 2011 conference

At the end of the conference, I had enough time to take a trip to the nearby Mediterranean Sea. I hadn't seen the ocean for many years and was very much looking forward to the experience. It was wonderful, and despite the fact that I hadn't been on a beach for a very long time, everything struck me as familiar: the waves of the open sea, the birds, the fantastic forms of seashells scattered on the sand. I caught sight of the Moon, high above the horizon, and suddenly, I considered my surroundings from a totally new perspective -- an astrobiological perspective. I was overwhelmed!