Pretty movie: Everything in the Saturn system is in motion!

A few weeks ago a producer for a public television space documentary asked me if I knew of any cool Cassini animations and my answer was, "Ooh, what a great excuse to have some fun digging around in the Cassini data archives." Here is the most fun animation I came up with in response to the request. It's made of data taken in August 2009, just after Saturn's equinox, when the rings were very dim. Cassini was on the outbound leg of its 117th orbit and was taking wide-angle camera movies of the rings emerging from Saturn's shadow, to watch for spokes. Cassini not only found spokes, it caught six different moons wandering in and out of the frame, plus Mimas' shadow making a very brief appearance.

Everything in the Saturn system is in motion. Over a period of nine hours, Cassini gazed at one of Saturn's ring ansae while the rings and moons spun on their different-speed orbits around Saturn. The first moons visible are Mimas (bigger) and Pandora (small, near the thin rope of the F ring), then Enceladus (similar in size to Mimas) and Epimetheus make an appearance at about the same time, followed by Janus, and then toward the end, Prometheus right on top of the F ring. You can also see spokes rotating with the B ring (the lightest part of the ring system in the middle), and braids and clumps traveling with the F ring (the skinny line at the outer edge of the ring system). Watch closely for a moment about two thirds of the way through the animation, when Mimas reappears at the lower left; you'll see a single frame where its shadow passes across the rings as a long dark line. 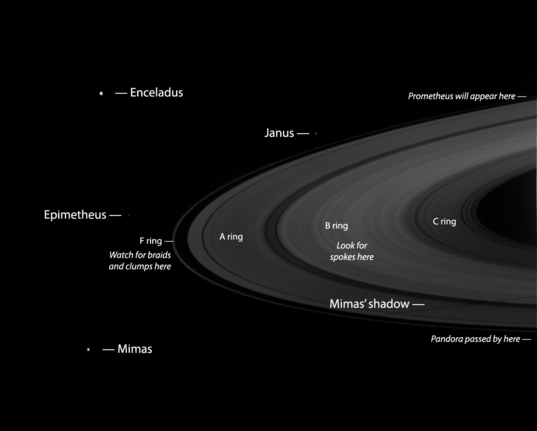 This image is just one in a 52-frame animation taken by Cassini on August 31, 2009, in which six moons and the spokes rotate through Cassini's wide-angle camera field of view. Note the long shadow cast by Mimas on the rings.

After recording the frames for this animation, Cassini took a few-hour break and then continued taking more data; there were like four or five of these ring-watching sessions back-to-back. I told myself I'd return to the project but I haven't had time.

To make the animation I adjusted the levels of each frame to bring up the brightness of the rings (which were quite dark, so close to equinox, almost edge-on to the Sun). I went through and erased the cosmic ray hits, which is easy to do when they happen in black space but is a pain when they appear on rings. There were a couple of frames with missing lines, which I patched by copying and translating good bits of rings into the gaps.