The far rim has this double-humped peak, flanked by a couple of smaller humps, and on the slope below the tallest peak there's an impact crater about 200 meters in diameter, which is just peeking above the horizon and only barely visible through the haze in this view from sol 2636.

The far rim of Endeavour crater peeks above Opportunity's horizon on sol 2636. It is 20 kilometers farther away from Opportunity than the near rim, which was about 2 kilometers away when the images for this color composite were taken.

Here's an orbital view of Endeavour -- Opportunity's headed to Cape York from the northwest, and the far rim hills are in the forward view, 20 kilometers away. 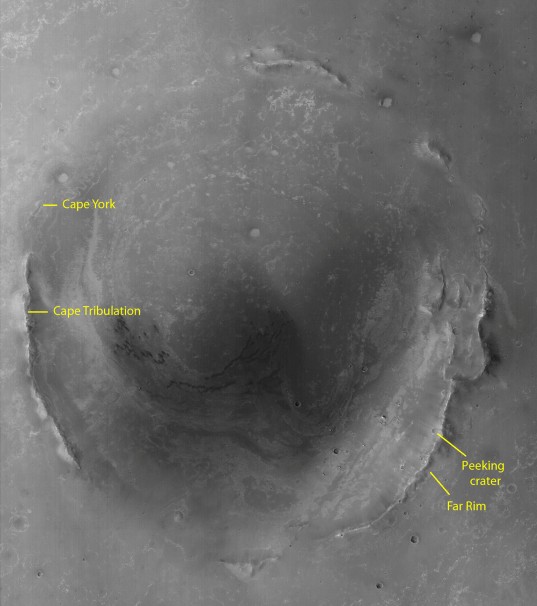 A few points visible in Opportunity's horizon views are labeled on a Context Camera image of Endeavour crater.

Despite Opportunity's high rate of driving in recent weeks -- five kilometers in the last hundred sols, a pretty amazing clip -- the view of these hills has remained frustratingly unchanged. You'd expect, as Opportunity closes in on the crater, that this line of mountains would climb higher on Opportunity's horizon. But Opportunity has been wallowing in a local topographic depression. It's a very small drop, only a few tens of meters deep, but it's been enough to keep those peaks only barely peeking up into Opportunity's view.

Finally -- finally!! -- that has changed. Here is how the horizon view has evolved over recent sols of driving, driving, driving. These images look gray but they're actually 3D -- put on your red-blue glasses to see the horizons recede from you. 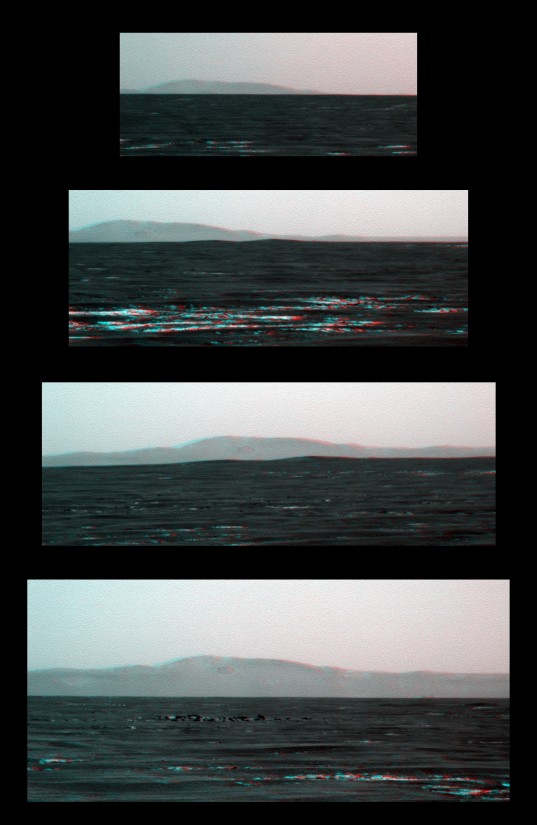 I don't know about you, but when I look from image to image and see that peeking far-rim crater rise up and up I swear I'm getting fooled by the same horizon illusion that makes the full Moon look so big when it's low in the sky. The diameter of that crater is not getting any smaller but it looks smaller and smaller as it appears to rise higher and higher.

There's been one more sol of driving since the last 3D image. Those images -- taken today, July 21, 2011, on Opportunity sol 2662 -- have only just started to come down, and there are data gaps that prevent me from turning them into another 3D view just yet. But there is enough of the left-eye image on the ground to contain something very exciting: a low hump of pixels that is not on the haze-lightened far horizon, but is instead on the darker near horizon. It was first sighted (among people outside the mission, anyway) by Fredk over at unmannedspaceflight.com. This may quite possibly be Cape York -- Opportunity's first sight of the goal toward which she's been aiming for three years. Less than a kilometer left! Go Opportunity!

In a Pancam image from sol 2662 (July 21, 2011), there is a low hump on the near horizon that could possibly be Cape York -- Opportunity's first sight of her goal on the near rim of Endeavour crater.