Ever closer to Vesta

Here's a photo of Vesta that was released by the Dawn team on Friday. I didn't post it right away because the version of the image in the official release has some bizarre processing artifacts that make it look as though the image had been made by cutting construction paper. As usual the guys at unmannedspaceflight.com took up the challenge of making nasty-looking images more pretty, and here's one of the better results. There are clearly some well-defined craters on the terminator but the patterns of light and dark toward the middle of the disk are still difficult to interpret. 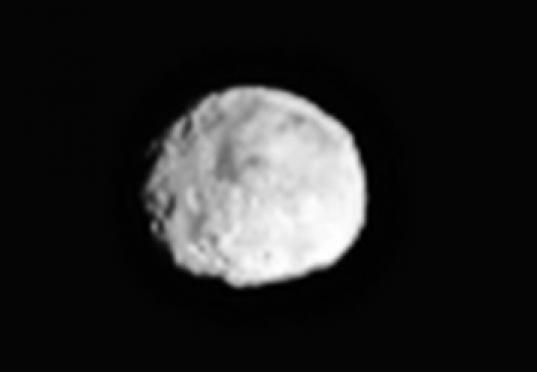 Dawn obtained this image of Vesta while on approach on June 24, 2011. It was taken from a distance of about 152,000 kilometers away from the protoplanet Vesta. Each pixel in the image corresponds to roughly 14.3 kilometers. This version has been processed to reduce the effect of the processing artifacts in the official release.

This image is now ten days old -- by now, Dawn is much closer and should be seeing Vesta much sharper. In fact, it was to have completed its first "rotation characterization" of Vesta on Friday -- I can't wait to see that sequence of images as a full-rotation movie.

I'm looking forward to the moment when Dawn is close enough to Vesta that the team feels that they can release the images without so much processing. The science team are inarguably the best at scientific interpretation of their data -- but they ought to leave heavy processing and prettifying of images to the experts, the amateurs who spend all their spare hours doing so!