Time again for my monthly look at what's going on with the robots exploring the solar system! It'll be a month full of routine activities for our intrepid explorers performing ongoing science at Mercury, Venus, the Moon, Mars, and Saturn. Dawn will reach Vesta orbit and get its first complete global maps this month, and Opportunity should be within spitting distance of Cape York by month's end. And I think it's time for me to add in three newcomers to these updates, all of which have recently been delivered to Kennedy Space Center, where they are being prepared for launch later this year: the Juno Jupiter orbiter, GRAIL lunar orbiters, and Curiosity Mars rover. (If you're wondering why I'm not also adding Phobos-Grunt/Yinghuo-1, I just don't pay attention to missions until there is actual hardware being put on a rocket at a launch site.)

Another thing worth noting is that, as of Monday, I've now been writing this blog for six years. Wow.

Before I go into mission-by-mission detail, here's Olaf Frohn's marvelous map of where all of our explorers are on June 1. The main change to this map since last month's is the departure of Chang'E 2 from the moon, bound for L2. Olaf didn't know exactly what course Chang'E 2 was taking, and neither do I; do you? If so, email me! 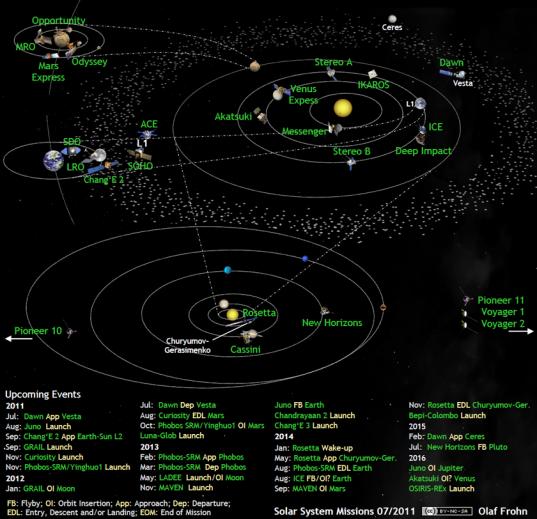 NASA's Juno spacecraft is scheduled for launch no earlier than August 5. It will fly by Earth in August 2013 and then travel on to Jupiter, arriving in July 2016. Visit the Juno section of the Kennedy media gallery to watch it come together. You can learn about Juno in this week's Planetary Radio show.

The twin spacecraft of NASA's GRAIL mission are due to launch no earlier than September 8. After a three- to four- month cruise, they will operate in lunar orbit for 90 days. Visit the GRAIL section of the Kennedy media gallery to watch it come together.

NASA's next great rover Curiosity, or Mars Science Laboratory, is scheduled for launch no earlier than November 25 and will land in August 2012. Its nominal mission will last one year but it should go on much longer. There isn't a dedicated MSL section of the Kennedy media gallery yet, but pictures are showing up in their hotpics section. There should be a final announcement of the choice of landing site some time this month -- Nature News seems to have jumped the gun by reporting Gale as the selection last month.

NASA's MESSENGER spacecraft is well into its primary science phase; in fact, last month, they completed their first Mercury year in orbit. Watch their gallery for regular image releases. I thought this color image along the terminator was particularly pretty. They're also doing weekly Web articles detailing the spacecraft's plans and explaining some results of the non-imaging experiments..

China's Chang'E 2 lunar orbiter has completed its primary mission and is now en route to L2, the Lagrange point on the far side of Earth from the Sun.

NASA's NASA's Lunar Reconnaissance Orbiter is busily mapping the Moon from its science orbit. They continue to select really cool images to caption in their gallery. This one, of polygonal fractures, looks a bit like Martian north polar terrain but its formation has nothing to do with underground water ice!

Out at Mars, it's high summer in the southern hemisphere; we're in the period of the longest sunlit days of the year, with the welcome boost to solar power that that brings. (It's currently Ls 319.6°.) Today it is Opportunity sol 2641. Opportunity continues to make incredibly fast progress toward Endeavour crater. The spot where she'll make "landfall" has been named Spirit Point for her deceased sister, and that point is now less than two kilometers away. She won't finish the drive in July, probably, but she could very well complete her journey to Endeavour in August, a bit under three years since she departed Victoria. Are we there yet? Are we there yet?Here is Eduardo Tesheiner's latest route map and Google Earth kml file for Opportunity.

ESA's Mars Express is carrying on with an extended mission, planned to run through 2014. No Mars Webcam images were returned last month. The most recent HRSC image release is a strikingly painterly view of buried ice deposits near Mars' south pole.

NASA's Mars Reconnaissance Orbiter is keeping an eye on Mars' weather with MARCI; they report "significant" dust storm activity "along the Acidalia storm track" that is fascinating to watch as it unfolds week by week, but Opportunity's skies have remained clear. As always, check in on the latest captioned image releases from HiRISE for your dose of spectacular photos. Among recent releases is this one with a beautiful swirling pattern of colored rocks that -- according to data from the CRISM spectrometer -- contain the mineral opal, a nearly pure form of silica that precipitates from low-temperature acidic fluids and contains nearly 20 percent water by mass.

NASA's Mars Odyssey is now the longest-lived spacecraft ever to operate at Mars. You can see the latest from its THEMIS instrument here. Here's a a pretty pic of chaos terrain near the east end of Valles Marineris.

NASA's Dawn spacecraft is steadily approaching Vesta and will be captured into orbit on July 16. It's now just over 100,000 kilometers from Vesta and closing fast. According to the mission timeline, the highlights of this month will be three "rotation characterizations" in which the spacecraft will temporarily halt thrusting in order to watch the asteroid rotate for a complete Vestian day (which is 5 hours and 20 minutes long), thereby mapping the entire world. These preliminary world maps will have lower resolution than later ones but will provide good global base maps. This month Dawn will also wallpaper the sky near Vesta in a search for any satellites; Earth-based searches have so far turned up nothing, so if Dawn finds anything it will be very very small. Dawn will nudge into Vesta orbit on July 16 but will continue spiraling downward until it reaches Survey Orbit, 2700 kilometers above Vesta, in early August..

The NASA-ESA-ASI Cassini mission is just wrapping up Rev 149 and will spend most of July in its Rev 150. It'll be yet another orbit within the ring plane, with most observations focused on Saturn and especially its great northern storm. There are no targeted flybys of moons this month, but Cassini will take advantage of chance alignments of moons for some nice mutual event observations. The most interesting-sounding of these will be one on July 17, when Dione passes in front of Rhea while the rings also partially obscure Rhea. Over the last few months the apoapsis of Cassini's orbit has been shifted so that it is closer to the Saturn-Sun line, so Cassini's views of Saturn have lower and lower phase (Saturn looks fuller and fuller). To see what Cassini's doing when, check out my long and detailed page on Cassini's tour of the Saturn sytem.

NASA's New Horizons has 11.84 AU to go to reach Pluto. It's on course for a January to July 2015 encounter with the Pluto and Charon system. It's just completed its annual checkout and is returning to hibernation. There are 1475 days left until Pluto closest approach.

JAXA's Akatsuki is now in solar orbit, on its long cruise to a second encounter with Venus in December 2016. It passed through solar conjunction successfully last month, and conducted some joint observations of the solar corona with Hinode.

JAXA's IKAROS flew past Venus in December and has been operating successfully since May 21, 2010. Follow the IKAROS blog to keep up with its relatively infrequent contacts with Earth; the last one was today.