Remember that neat picture and movie of Phobos passing by Jupiter that I posted last week? Several people asked me where Jupiter's moons were, and I just assumed that they weren't visible. I was wrong; Mars Express spotted Jupiter's moons along with the planet and Mars' moon! By stretching the contrast of the original image mightily, the Mars Express camera team shows us that they bagged all of Jupiter's Galilean moons. 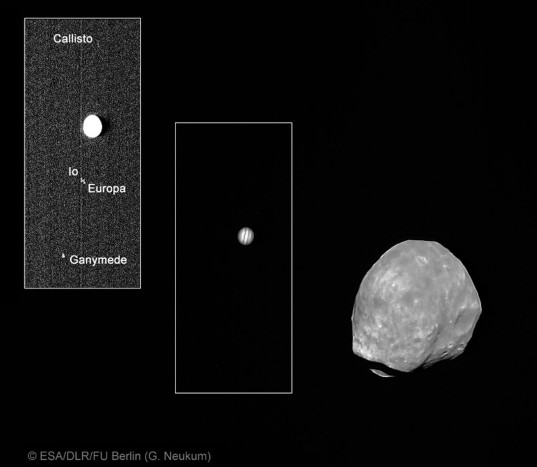 On June 1, 2001, Mars Express watched as Phobos (the inner and larger of Mars' two moons) slipped past distant Jupiter. Mars Express was studying Phobos to help the ill-fated Russian Phobos-Grunt mission prepare to land on the moon and grab a sample for return to Earth. Phobos is only 23 kilometers in diameter, while Jupiter is 142,000 kilometers across! The inset image shows that the camera was sensitive enough to spot all four of Jupiter's moons as well, once the contrast was greatly enhanced.

My former boss Lou Friedman also pointed out that this image is timely, because Jupiter and Phobos are both targets of launches this year!