Check out an update on this post, in which Jupiter's moons can be spotted near the planet. --ESL

OK, one cool video deserves another this Friday! Here is a really cool view of Phobos in the foreground with gigantic (but very distant) Jupiter sitting in the background, a fortuitous alignment that the Mars Express High-Resolution Stereo Camera team took advantage of on June 1: 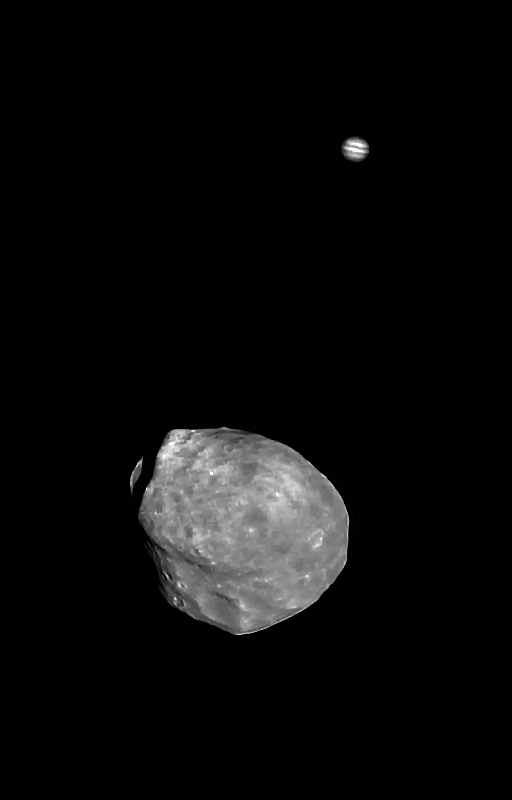 On June 1, 2001, Mars Express watched as Phobos (the inner and larger of Mars' two moons) slipped past distant Jupiter. Phobos is only 23 kilometers in diameter, while Jupiter is 142,000 kilometers across! The image has been rotated from the original so that the south pole of Phobos is down. Stickney crater takes a bite out of the moon to the left.

This photo was just one of a series of 104 that they captured, which they also released as an animation:

On June 1 2001, Mars express watched as Phobos (the inner and larger of Mars' two moons) slipped past distant Jupiter. Mars Express is studying Phobos to help the Russian Phobos-Grunt mission prepare to land on the moon and grab a sample for return to Earth.

Apart from being cool, this set of images will help astronomers refine their understanding of the path of Phobos' orbit around Mars, which varies with time because of Phobos' small mass and extreme proximity to its planet.

By the way, this image really reminds me of another recent one of ESA's with a lumpy body in the foreground and a giant planet in the background: 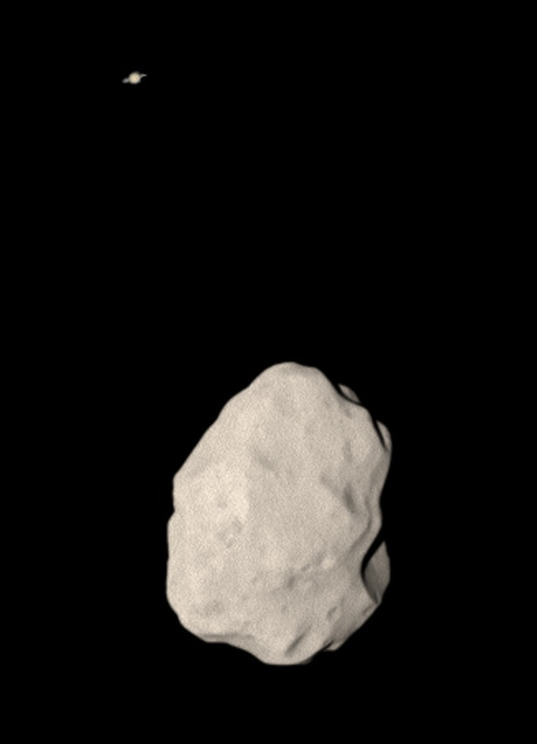 Lutetia and Saturn, in color

As Rosetta flew past Lutetia, a bright ringed planet passed through its field of view -- Saturn! This version has been artificially colorized.