Time again for my monthly look at what's going on with the robots exploring the solar system! It'll be a busy month for Cassini, with lots of cool icy moon observations: it'll spend several days looking at Iapetus, and will pass very close to Helene mid-month before doing some RADAR work on a Titan flyby. Opportunity just seems to get faster every month -- if she keeps up her pace, she'll be at the rim of Endeavour crater by the end of the summer. And Dawn is still getting closer to Vesta, though I have to say that my enthusiasm for its approach to this new world has cooled a bit since they haven't released any images since their first view of Vesta early last month.

Before I go into mission-by-mission detail, here's Olaf Frohn's marvelous map of where all of our explorers are on June 1. There are two major changes to this map since last month's: Spirit is now "grayed out," and it'll be the last time her name appears; and OSIRIS-REx has been added to the list of future launches. 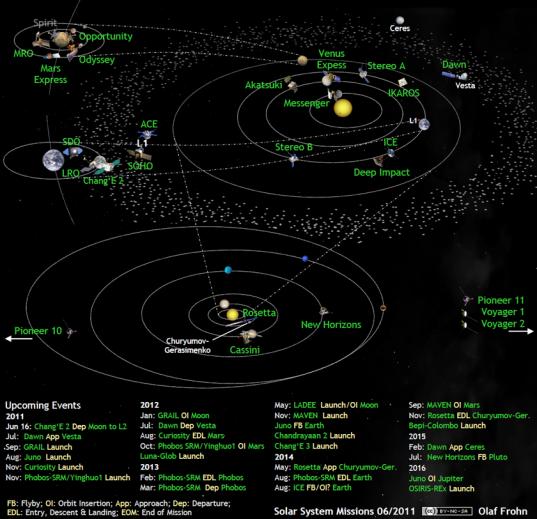 NASA's MESSENGER spacecraft is well into its primary science phase. Watch their gallery for regular image releases. They're also doing weekly Web articles detailing the spacecraft's plans. The most recent one is the first I've seen that has an update on what's been accomplished so far in the science mission; there's a map showing the current state of coverage of Mercury's surface with laser altimeter tracks..

China's Chang'E 2 lunar orbiter has completed its primary mission; this month, on June 16, it will depart orbit and travel to L2, the Lagrange point on the far side of the Moon from Earth.

NASA's NASA's Lunar Reconnaissance Orbiter is busily mapping the Moon from its science orbit. They continue to select really cool images to caption in their gallery . This one, of a "granular flow" down a slope is really striking; it's like one of those dark slope streaks on Mars, but inverted in color.

Out at Mars, it's high summer in the southern hemisphere; we're in the period of the longest sunlit days of the year, with the welcome boost to solar power that that brings. (It's currently Ls 302.6°.) This is, sadly, the last time I will mention Mars Exploration Rover Spirit in this "What's up" update; she was last heard from well over a year ago, on sol 2210 or March 22, 2010, and NASA has now given up on her phoning home again. Today it is Opportunity sol 2613. Opportunity started the month exploring a small cluster of craters (Sigma 7, Friendship 7, Faith 7, and Freedom 7) and has been making incredibly fast progress toward Endeavour crater, probably a kilometer and a half in the last month alone. Her odometer is just about to turn past the 30-kilometer mark. Here is Eduardo Tesheiner's latest route map and Google Earth kml file for Opportunity.

ESA's Mars Express is carrying on with an extended mission, planned to run through 2014. No Mars Webcam images were returned last month.

NASA's Mars Reconnaissance Orbiter is keeping an eye on Mars' weather with MARCI; they report local dust storms across the planet just now, and very slightly cloudy skies for Opportunity. As always, check in on the latest captioned image releases from HiRISE for your dose of spectacular photos. Among recent releases is a crazy spider located near the south pole.

NASA's Mars Odyssey is now the longest-lived spacecraft ever to operate at Mars. You can see the latest from its THEMIS instrument here. Here's a cool one of a layering within Terby crater.

NASA's Dawn spacecraft is steadily approaching Vesta and will be captured into orbit on July 16. It's now fewer than 600,000 kilometers from Vesta and closing fast. According to the weekly mission status updates, they've been taking images regularly, but they've only released one image so far -- I would sure love to see a few more. Come on, Dawn team, show us Vesta!.

The NASA-ESA-ASI Cassini mission is just wrapping up Rev 148 and will spend most of June in its Rev 149. It'll be yet another orbit within the ring plane, but unlike the last several such, this one will feature lots of observations of moons other than Titan, as explained in the Rev 149 Looking Ahead article. On June 7 and 8 Cassini will approach to within 900,000 kilometers of Iapetus, which doesn't sound very close, but since Iapetus is among the largest of Saturn's moons it'll result in some of the best images of that moon that we've seen in a while. On June 16, there'll be a nice mutual event of Rhea crossing Titan. Just before periapsis on June 18, Cassini will pass within 7,000 kilometers of Helene, gathering observations that should "finish off" Cassini's global map of the co-orbital moon. On June 20 there's a targeted Titan flyby, which belongs mostly to the RADAR team for scatterometry, altimetry, and SAR imaging. Over the last few months the apoapsis of Cassini's orbit has been shifted so that it is closer to the Saturn-Sun line, so Cassini's views of Saturn have lower and lower phase (Saturn looks fuller and fuller). To see what Cassini's doing when, check out my long and detailed page on Cassini's tour of the Saturn sytem.

NASA's New Horizons has 12.08 AU to go to reach Pluto. It's on course for a January to July 2015 encounter with the Pluto and Charon system. There are 1504 days left until Pluto closest approach.

JAXA's Akatsuki is now in solar orbit, on its long cruise to a second encounter with Venus in December 2016.

JAXA's IKAROS flew past Venus in December and has been operating successfully since May 21, 2010, really an amazing accomplishment for such a small, experimental craft. Follow the IKAROS blog to keep up with its relatively infrequent contacts with Earth; the last one was today.