Time again for my monthly look at what's going on with the robots exploring the solar system! The highlight of this month will, I think, be Dawn's first optical navigation images of its first target, Vesta. For this month Dawn will still be too far away to see Vesta any better than Hubble has, but those few pixels of slowly brightening light represent the first trickle in what will be a flood of data from the first really big asteroid to be visited by a spacecraft. Also, for those of you who are early risers, there will be a beautiful assembly of planets in the predawn skies: Mercury, Mars, Venus, and Jupiter will be super-close to each other, with a crescent Moon joining them on May 1. For most of the other missions on my list it will be business as usual, whether business is charging across a Martian plain toward distant mountains or swooping around a giant planet to watch storms dropping methane rain and geysers spewing ice crystals into the vacuum of space!

Before I go into mission-by-mission detail, here's Olaf Frohn's marvelous map of where all of our explorers are on May 1. Compare it to last month's diagram to see how things have moved. 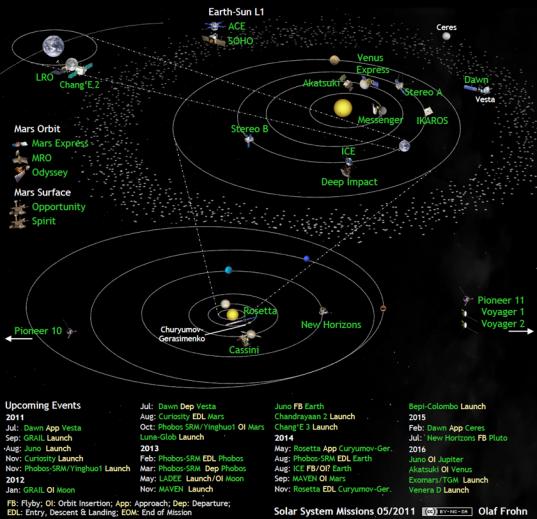 Solar system exploration missions in May 2011

Solar system exploration missions in May 2011, by Olaf Frohn

NASA's MESSENGER spacecraft is well into its primary science phase. Watch their gallery for regular image releases, like this neat one of an X-shaped splat of secondary crater chains within another crater. They're also doing weekly news stories detailing the spacecraft's plans, but they don't yet contain any new information on spacecraft status. There's also a Q-and-A section of their website; here's an informative answer explaining how the MDIS images are calibrated before release..

ESA's Venus Express remains in orbit on a mission that has been extended through 2014. There was a news story on their website last month with some neato animations of the south polar vortex, relating to a paper published in Science.

NASA's NASA's Lunar Reconnaissance Orbiter is busily mapping the Moon from its science orbit. Here's a neat image of a possible small volcano they released to their gallery yesterday. Mike Howard has ingested the latest LOLA topographic data release into his free Moon Globe app, which has improved its sharpness.

Out at Mars, it's high summer in the southern hemisphere; we're in the period of the longest sunlit days of the year, with the welcome boost to solar power that that brings. (It's currently Ls 282.7°.) Today it is Mars Exploration Rover Spirit sol 2601 and Opportunity sol 2581. It's now been over a year since Spirit was last heard from (on sol 2210 or March 22, 2010), but efforts to contact her continue. It's been barely more than a month since Opportunity departed Santa Maria crater (on sol 2547), but she's already driven more than 1.6 kilometers toward the rim of Endeavour crater. Fewer than five kilometers separate her from the nearest rim of Endeavour crater. Her odometer recently turned past the 28-kilometer mark. Here is Eduardo Tesheiner's latest route map and Google Earth kml file for Opportunity. Included in this latest update is a new projected future path for Opportunity based on a map posted to the mission website.

ESA's Mars Express is carrying on with an extended mission, planned to run through 2014. They don't release many images but the ones they do put out are well-chosen; their latest is a really fine view of Ceraunius Tholus and Uranius Tholus. (There is an oddity in it, though: the data must have been collected at two different times, because there are some really pretty clouds over Ceraunius Tholus that are chopped off as a sharp line halfway down the mountain.) No Mars Webcam images were returned last month.

NASA's Mars Reconnaissance Orbiter is keeping an eye on Mars' weather with MARCI; they report slightly dusty weather across the whole planet just now, and clear skies for the rovers. As always, check in on the latest captioned image releases from HiRISE for your dose of spectacular photos. Among recent releases is a new color view of the part of the Endeavour crater rim toward which Opportunity is zooming.

NASA's Mars Odyssey is now the longest-lived spacecraft ever to operate at Mars. You can see the latest from its THEMIS instrument here. Here's a cool one of a crater that has a central peak that itself contains a central pit.

NASA's Dawn spacecraft is steadily approaching Vesta and will be captured into orbit on July 17. It's now 1.4 million kilometers away and closing. It'll begin capturing optical navigation images of Vesta in just a few days, on May 3, and the images will surpass Hubble's best resolution starting in early June..

The NASA-ESA-ASI Cassini mission is just wrapping up Rev 147 and will spend almost all of April in its Rev 148. Rev 148 will be yet another orbit within the ring plane featuring lots of observations of Saturn and Titan (including a targeted flyby on May 8), with a couple of other very cool observations. On May 10, Cassini will image Enceladus' plumes as Enceladus goes into eclipse and Helene passes by. On May 12, Cassini will hopefully spot distant irregular moon S/2004 S12; if so, it should get enough data on the moonlet's orbit to be granted an official name by the IAU. And on May 21, near apoapsis, Cassini will watch a spectacular mutual event where Titan passes in front of Saturn; during the observation, both Dione and Tethys will pass between Titan and Saturn. Sharpen your image-processing skills for that one!! TheMay 8 Titan flyby will really lengthen Cassini's orbit; at apoapsis on May 30 it'll be almost half a million kilometers farther from Saturn than Iapetus is.

NASA's New Horizons has 12.35 AU to go to reach Pluto. It's on course for a January to July 2015 encounter with the Pluto and Charon system. The big news from the mission last month is that they have officially started the search for bodies in the Kuiper belt toward which New Horizons will steer after the Pluto flyby. Also, the Moon occults New Horizons on May 20. There are 1537 days left until Pluto closest approach.

JAXA's Akatsuki is now in solar orbit, on its long cruise to a second encounter with Venus in December 2016. The Twitter feed indicates that Akatsuki last communicated with Earth on April 26. There is a new report (PDF) from the committee that is investigating Akatsuki's failure to enter Venus orbit that contains a lot of interesting-looking diagrams. Here's a summary, in French, of the report, that Google Translate handles very well; it indicates concern about the temperature of a fuel control valve due to Akatsuki's closer-than-planned distance to the Sun.

JAXA's IKAROS flew past Venus in December and has been operating successfully since May 21, 2010, really an amazing accomplishment for such a small, experimental craft. Follow the IKAROS blog to keep up with its relatively infrequent contacts with Earth; the last one was today.

Finally, NASA's Voyager 1 and 2 spacecraft are still going strong. Follow the current position of both using the Twitter feed of Voyager 2, which also mentions the position of Voyager 1 once a day. This, by the way, is an unofficial (but well-informed) feed; an official Voyager Twitter account was just started. They had a press briefing today that was really more of a public lecture on where the Voyagers have been and where they're going.