So far, no moons found at Ceres or Vesta

Since the Galileo mission discovered tiny Dactyl circling Ida in 1993, quite a lot of asteroid systems have been found to be binary; there are even a few triples. (The most recent reference I could find on a five-minute search said that 195 companions of asteroids had been discovered, as of late 2010; it's got to be more than that by now.) So it's quite reasonable to guess that two of the biggest asteroids, Ceres and Vesta, might also have satellites.

A recent paper by Allyson Bieryla and a pile of coauthors reports on an attempt to find moons of Ceres using the Hubble Space Telescope and the Hale telescope at Palomar. The Hubble data allowed them to look very close to Ceres, so that they could spot moons down below the Roche limit, the altitude where tidal forces would tear them apart. The Palomar data extended their coverage to quite far away from Ceres, beyond its Hill sphere, the region of Ceres' gravitational influence. 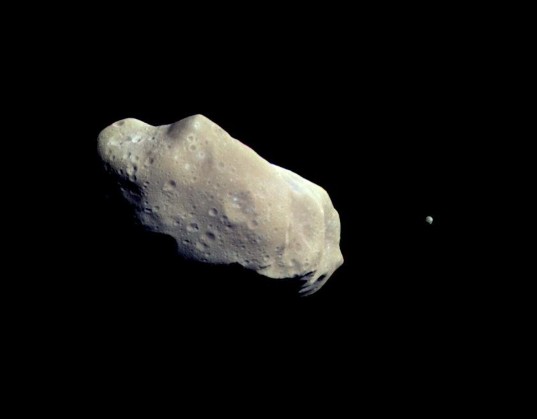 Galileo captured this image of asteroid Ida and its moon Dactyl about 14 minutes before its closest approach on August 28, 1993.

They didn't find any moons in either data set. With a little statistical analysis, they showed that Ceres does not have any satellites larger than about 1 to 2 kilometers in diameter. That's pretty small. If small asteroids have moons, why doesn't Ceres?

They offer one speculative explanation. Moons are mostly thought to form from their parent asteroids, when an impact knocks material from the parent body into orbit. We know Ceres has an ice-rich composition, yet it orbits the Sun within the "snow line," the region where solar heating can make surfaces warm enough for ices to vaporize. Any icy material blasted off of Ceres' surface and into orbit would likely not survive long; like comets, they'd vaporize under the onslaught of solar radiation.

The cool thing about that scenario is that while Ceres may not have moons now, it may occasionally have had comets as moons! I want a space artist to paint that.

After I read this paper I wondered what the results of satellite searches around Vesta have been. Here's a conference presentation from 2009 by Lucy McFadden and coworkers. They didn't find any satellites either. And their detection limits were even more stringent; they figure that if there had been a moon bigger than about 50 meters across, they'd have seen it.

Dawn will look for things in orbit at both bodies as it approaches -- but it's not looking good for Dawn to discover moons at either asteroid.