Are there more Titans than Earths in the Milky Way?

The paper, by Ashley Gilliam and Chris McKay, considers what range of conditions would favor liquid methane on alien worlds. It begins by summarizing the conditions that currently prevail on Titan: a surface temperature of 94 Kelvin and an atmosphere composed mostly of nitrogen with 5% methane, with a small but important fraction of haze that is opaque to visible light but transparent to thermal infrared light. I knew this much about Titan already but hadn't thought through the implications: unlike Earth, Titan experiences an anti-greenhouse effect. Greenhouse gases on Earth are transparent to the Sun's primarily visible light, but opaque to the thermal infrared waves that are radiated up from the ground and oceans, so the Sun's energy gets trapped within the atmosphere, warming the planet. Titan's haze, by contrast, blocks incoming solar radiation but permits heat to escape, cooling it. 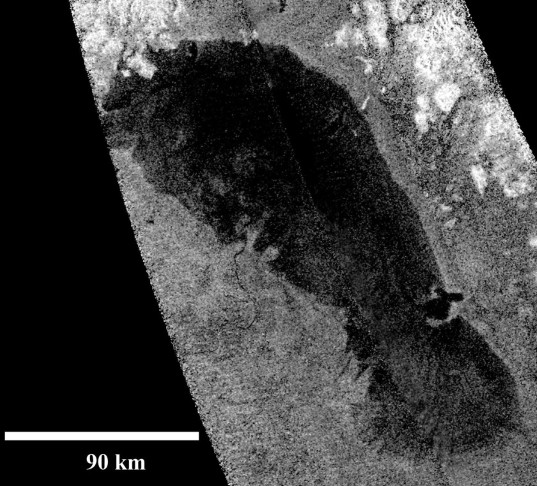 Ontario Lacus is the largest lake in Titan's southern hemisphere. This view of it was captured by the RADAR instrument on January 12, 2010. In the center left of the lake there is a visible dark channel running in to what seems to be a delta. The lake does not appear totally black because the radio waves actually penetrate through the liquid to the lake's bottom. To Cassini's cameras, the lake surface appears smooth and dark.

Where might Titan-like worlds exist? One tantalizing possibility is that there may be lots of them orbiting red dwarf stars. Red dwarfs are much more common than Sun-like stars. Less luminous than our Sun, they're poor candidates for systems that might support water-based life, because in order for a planet to be close enough to a red dwarf to be warm enough for liquid water, it would be close enough to be tidally locked, resulting in overheating of the star-facing hemisphere and overcooling of the star-shunning hemisphere. But they're great candidates to have planets that are as cool as Titan.

Red dwarfs put out more of their light as infrared than the Sun does. Since Titan's haze is transparent to infrared, that means more of a red dwarf's radiation would reach our theoretical Titan-ish planet's surface than it would if it orbited the Sun; Titans can be farther from red dwarfs than they would be from Suns and have the same surface temperature.

Things get more complicated, though, if you ask what effect the different radiation from a red dwarf would have on the production of atmospheric haze. If the dwarf has a normal to low amount of flare activity, they'd produce less ultraviolet radiation than our Sun, leading to more haze production. If the dwarf is an active one, though, there'd be more ultraviolet radiation, which would break up the haze molecules.

With a range of possible red dwarf star activities, they found that Titan-sized worlds could have Titan-like conditions at distances of 0.24 to 0.52 astronomical units from their stars. What if the world is big enough to have geothermal heat -- what if you have an Earth-sized world around these stars? It doesn't make much of a difference, it turns out; production of internal heat increases the distance that the planet could be from the star and still have Titan-like surface conditions by about 5%. With a large enough internal heat flux, there could even be Titan-like "rogue planets" wandering around the galaxy.

With a range of different amounts of haze production, they wound up with a pretty large "liquid methane habitable zone" around red dwarf stars -- 0.084 to 0.23 AU for less active stars, and 0.63 to 1.66 AU for a more active one like Gliese 581 -- a star that we already know supports several giant planets. There could easily be more Titan-like moons orbiting those planets.

The conclusion is that, since red dwarfs are so common, there may very well be many more Titans in the galaxy than there are Earths. Could life have originated in these conditions? Who knows?

Here's a final thought: if we ever do discover life that originated in methane rather than water, it would be pretty clear evidence that life began more than once. 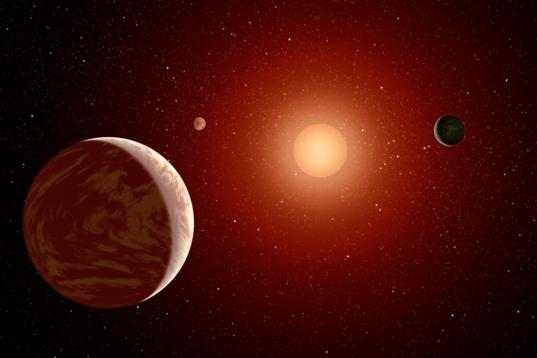 This artist's concept illustrates a young, red dwarf star surrounded by three planets. Such stars are dimmer and smaller than yellow stars like our sun, which makes them ideal targets for astronomers wishing to take images of extrasolar planets.