Congratulations to the California Science Center on getting Space Shuttle Endeavour!

Space exploration is an international endeavor and I usually try to speak as a citizen of Earth rather than one of my nation, state, or city, but I'm going to ask you to indulge me in a little local boosterism today

Woo hoo! The California Science Center has been awarded one of the retired shuttles!

The California Science Center is one of a complex of museums in the cultural center of Exposition Park. Exposition Park is just south of downtown Los Angeles, the historic site of two Olympiads, near the University of Southern California. The California Science Center is a fun hands-on science and technology museum that my daughters enjoy visiting. Tucked behind it, in a separate building that I think is often overlooked by museum visitors, is an Air and Space Gallery that surprised me, when I first visited it some years ago, with the quality of its space exploration artifacts. 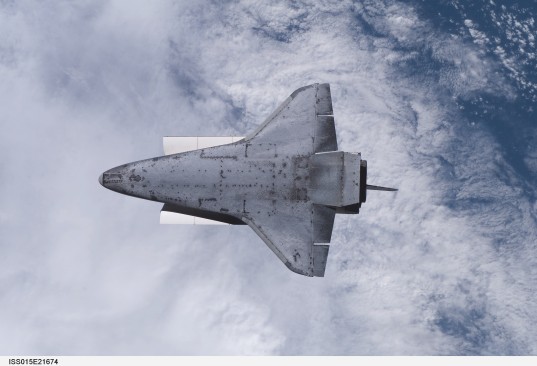 Astronauts aboard the Space Station took this photo of the underside of Endeavour on August 10, 2007 during the STS-118 mission, as part of an inspection of the Shuttle's heat-resistant tiles.

From human exploration there's the Apollo-Soyuz command module, the Gemini 11 capsule (tilted so you can appreciate its burned and blackened heat shield), the Mercury-Redstone 2 capsule, an Apollo spacesuit (formerly worn by Apollo 16 command module pilot Thomas Mattingly), and a piece of a Saturn V. From planetary exploration there are replicas of Explorer 1 and Sputnik, a full-scale(!!) model of Cassini-Huygens, and the engineering model of Pioneer Venus. There are also some great aviation artifacts, including an actual A-12 airplane, the original stealth spy plane, situated outdoors where you can walk under and around it.

The Air and Space Gallery has cool stuff but has always seemed to me to be the forgotten little sister to the main museum, and now I understand why. The California Science Center's 25-year master plan includes three phases of renovations. Two phases are complete; the third phase is to replace the Air and Space Gallery with an entirely new "Worlds Beyond" wing of the museum, and since they were applying to receive a Shuttle I think they were waiting to proceed with the development of Worlds Beyond until they knew whether or not they'd get one. Surely an actual Shuttle would be the star of such a gallery.

Well, NASA announced yesterday that the California Science Center is getting Endeavour, the last of the Shuttles to be built. (Enterprise is going to the Intrepid Sea, Air, and Space Museum in New York; Discovery is going to the Udvar-Hazy Center in Washington, DC; and Atlantis is going to Kennedy Space Center in Florida.) Given that southern California is such an important center for unmanned space exploration and astronomy, I think it's ironic that Endeavour is the one surviving Shuttle that did not launch any planetary or astronomy spacecraft -- but that's not important. I'm psyched that Endeavour will be here in Los Angeles, because I'm sure that the California Science Center will create a spectacular new space gallery around it, to be visited by well over a million people every year, including myriad children from the Los Angeles public schools. Who among them will be inspired by the engineering feats accomplished by the Shuttle program to pursue careers in science and technology?