Comparing Clementine and Chandrayaan-1 spectra from the Moon

A paper recently published in the Journal of Geophysical Research illustrates how challenging it can be to try to study a world remotely, from an orbiter positioned a hundred kilometers away. In "Newer views of the Moon: Comparing spectra from Clementine and the Moon Mineralogy Mapper" Georgiana Kramer and several coauthors performed a careful comparison of two data sets that seem like they're measuring the same things, so you'd think that the measurements they took would match between the two instruments. But they don't quite match. And although Kramer et al. have some good hypotheses about why the two instruments don't produce identical results when measuring the same spots, it's not clear that there's a defensible, systematic way to adjust ("calibrate") the data sets in order to make them match.

The article discusses two spectrometric data sets from two lunar orbiters. (This kind of data is referred to, dismissively or lovingly depending on what kind of scientist is talking about it, as "squiggly lines.") One data set is from the UV-VIS camera on Clementine, and the other is from the Moon Mineralogy Mapper (M3 or "M-cubed") on Chandrayaan-1. Both instruments mapped the Moon in wavelengths from visible to near-infrared, from a little over 400 nanometers to a little under 3 microns for both instruments. They had similar spatial resolutions, around 100-200 meters per pixel. The biggest obvious difference between the two instruments is spectral resolution -- that is, how many "slices" they cut the spectrum of light into. Clementine's UV-VIS was a camera with 11 filter wheels, so its spectra are graphs with only 11 points. M-cubed was a spectrometer that could split incoming light into 85 different slices, giving it a more detailed look at the colors of the Moon. Still, I would have expected the Clementine plots to be basically similar to the M-cubed plots.

They are similar, but there are some bothersome differences, which I'll get to in a moment. Here's a figure from the paper that looks at a small area of the Moon and compares the two. Whenever you look at spectra from the Moon or really almost any place in the solar system, they slope upwards from short (blue) wavelengths to long (red, infrared) wavelengths. Spectra that look like that are described as "red" as opposed to being "blue," and they're typical of rocks that have been exposed to space weathering for a very long time. In the plots below, there are two sets of graphs, one that just shows you the reflectance where you can see this slope upwards to red wavelengths, and one that has the "continuum removed" -- which means they subtracted out that slope, which reveals smaller-scale wiggles and bumps in the spectra that can tell you about the composition of the rocks. 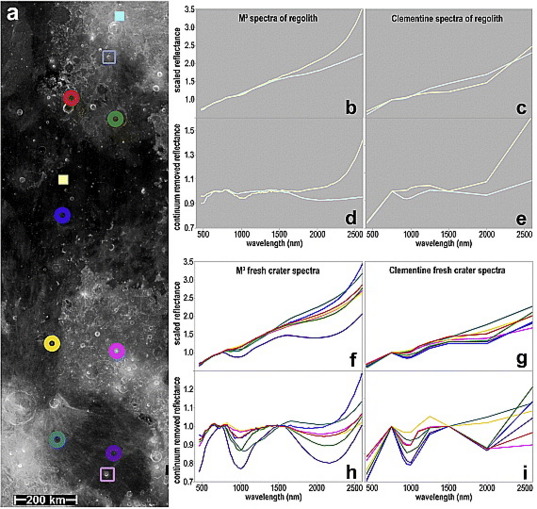 So what's the difference between the two sets of spectra, besides the fact that there are fewer points on the Clementine graphs than on the M-cubed graphs? Here's what Kramer et al. say:

If the two instruments were measuring similar things, why did they produce different results? Clementine was there before Chandrayaan-1, but these differences can't be real; the whole Moon has not darkened in the time separating the Clementine and Chandrayaan-1 missions. Kramer et al. cite two main reasons for the differences: calibration and illumination geometry.

All scientific instruments need to be calibrated: they have to be used to measure a material whose properties are known, and the instrument's measurements corrected until they match the known properties of that material. That correction is written down and applied to all measurements made later by the instrument. For a more simple example, you might calibrate a thermometer by sticking its tip in an ice bath, and marking that measurement on the thermometer as being 0 degrees Celsius. To be really thorough, you'd recalibrate from time to time, repeating the ice bath to make sure the 0 mark has stayed in the same place, and moving the mark if it didn't.

M-cubed was carefully calibrated in the laboratory, where both a lab spectrometer and M-cubed were pointed at the same materials, but Clementine's UV-VIS wasn't. UV-VIS data had to be calibrated after launch. UV-VIS was calibrated in part by taking its remote measurements of the soil at the Apollo 16 landing site and comparing them with laboratory spectra of soil brought back to Earth by the Apollo astronauts. But studies of the Apollo 16 landing site with Earth-based telescopes have revealed that lab measurements of old lunar regolith are brighter than remote measurements of undisturbed soil. This discrepancy explains why Clementine spectra appear brighter everywhere than M-cubed's do, and also explains the difference in red slope between the two.

Differences in illumination geometry are a much stickier problem to deal with. Different materials on the Moon appear different when the Sun strikes them from different angles. And the Moon gets so hot during the day that there's actually some thermal emission happening in the longer infrared wavelengths, to make interpreting the spectra even more complicated. Clementine and Chandrayaan-1's observations of the same spots on the Moon were taken with the Sun in different positions, at different times of day. To directly compare the two you'd have to correct each pixel for the different Sun angle and the different temperature, but these corrections have to be different depending on whether the pixel contains mostly basalt or mostly anorthosite or more regolith or less regolith. It's a terribly complicated problem.

It's frustrating to send two spacecraft to observe the same thing and come up with different results. Some people might even throw up their hands and move on to a less challenging problem. But that's not the attitude of spectroscopists, who love their "squiggly lines" no matter how hard it is to interpret them. There's a sentence in this article's conclusions that's unusually passionate, for a scientific paper: "This comparison is not meant to highlight the flaws or inaccuracies in one instrument over another, but instead to relish in our accomplishments of the past, delight in our progress, and explore our ability for further improvement. It is from this type of comparative analysis and future, more detailed ones that we will learn and understand how to bring remote measurements closer to reality and improve the return of scientific knowledge from spacecraft data."

More power to you!