Before I go into mission-by-mission detail, here's Olaf Frohn's marvelous map of where all of our explorers are on March 1. Compare it to last month's diagram to see how things have moved. 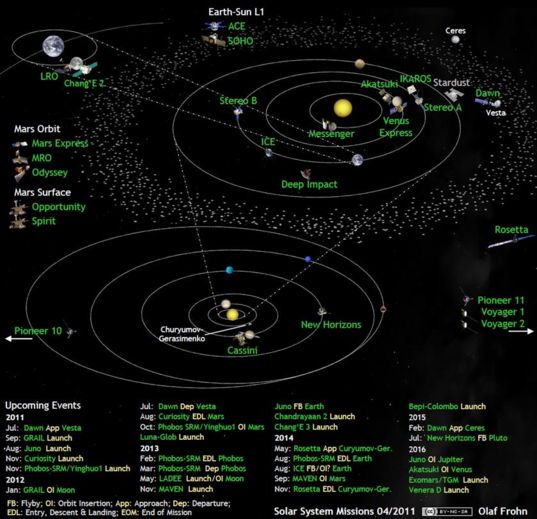 Having turned on all its instruments and verified that they're working great, NASA's MESSENGER spacecraft will start its primary science phase on April 4. It's not that the images they're taking now won't be useful for science; it's just that the period of time during which they plan to perform all the work to accomplish MESSENGER's data gathering goals for the primary mission officially starts on the 4th. At today's press briefing, they promised a preliminary science briefing some time in May. Watch their gallery for regular image releases..

ESA's Venus Express remains in orbit on a mission that has been extended through 2014. This month will see the fifth anniversary of its arrival at Venus.

China's Chang'E 2 lunar orbiter is presumably still operating at the Moon but there's been no news from the mission that I have heard since November. Anybody know anything about its status? Bueller?

NASA's NASA's Lunar Reconnaissance Orbiter is busily mapping the Moon from its science orbit. Last month they released huge versions of their wide-angle camera mosaics covering the whole Moon, the product of nearly two years of work to gather and calibrate the images.

Out at Mars, it's late spring in the southern hemisphere; we're entering the period of the longest sunlit days of the year, with the welcome boost to solar power that that brings. (It's currently Ls 265.3°.) Today it is Mars Exploration Rover Spirit sol 2574 and Opportunity sol 2554. It's now been over a year since Spirit was last heard from (on sol 2210 or March 22, 2010), but efforts to contact her continue. Opportunity departed Santa Maria crater on sol 2547, and has already driven a further 200-plus meters toward Endeavour. About six kilometers remain in Opportunity's journey to the nearest rim of Endeavour crater. Her odometer has just turned past the 27-kilometer mark. Here is Eduardo Tesheiner's latest route map and Google Earth kml file for Opportunity.

ESA's Mars Express is carrying on with an extended mission planned to run through 2014. Their latest image release of an elongated crater is pretty cool. Mars Webcam images have resumed, most showing Mars at half-full phase, but there was a cool recent set from closer range, over the sunlit south polar cap.

NASA's Mars Reconnaissance Orbiter is keeping an eye on Mars' weather with MARCI; they report slightly dusty weather across the whole planet just now, and clear to slightly hazy skies for the rovers. As always, check in on the latest captioned image releases from HiRISE for your dose of spectacular photos. They've recetnly redesigned their website and it's quite pretty but I'm irked about the fact that I now have to scroll down for the links to the full-extent and full-res image products. Among recent releases I like this one which contains wacky ropy ridges, possibly glacial in origin.

NASA's Mars Odyssey is now the longest-lived spacecraft ever to operate at Mars. You can see the latest from its THEMIS instrument here. I'm intrigued by this "Inca City" site; I might have to take a closer look at that one.

I've decided that this is the month that I'm going to promote NASA's Dawn mission from the "quietly cruising" section of this update to the "missions actively doing stuff" part of this update. Dawn's instruments have been turned on in preparation for Vesta approach science, so this seems like the right time. It is slowly creeping up on its July rendezvous with Vesta. Its images of Vesta will surpass Hubble's best resolution in early June. That's just two months away! And even before its resolution becomes better than Hubble's, it will be able to do something that Hubble never could, which is to watch Vesta continuously, for hours or days at a time. Dawn is currently about 3.4 million kilometers from Vesta..

The NASA-ESA-ASI Cassini mission is just wrapping up Rev 146 and will spend almost all of April in its Rev 147, a 28-day orbit at a low inclination, meaning that Cassini should get relatively frequent opportunities for imaging icy moons. However, in this second mission extension, it's getting less common for the lower-staffed Cassini mission to make complex enough plans to include every imaging opportunity. Rev 147, like the previous two orbits, will focus almost entirely on Saturn and Titan. After Cassini rounds periapsis and starts on the outbound leg of the orbit, it will meet Titan on April 19. This flyby will make a big tweak to Cassini's orbit, shortening its period substantially, so that after it reaches apoapsis and dives back in toward Saturn it meets Titan again on the inbound leg of the orbit, less than three weeks later, on May 9.

NASA's New Horizons passed the average orbital distance of Uranus last month, but still has 12.58 AU to go to reach Pluto. It's on course for a January to July 2015 encounter with the Pluto and Charon system. It won't reach Neptune's orbital distance until August 2014, less than a year prior to its encounter with Pluto. There are 1565 days left until Pluto closest approach.

Deep Impact has completed its "EPOXI" mission extension, in which it studied extrasolar planets and encountered comet Hartley 2. NASA solicited proposals for another mission extension last October; there's no word yet on whether the spacecraft will get a second mission extension or not. Sadly, there's not enough fuel remaining to target a third comet, but it could conceivably be used for more exoplanet observations from its current orbit.

JAXA's Akatsuki is now in solar orbit, beginning its long cruise to a second encounter with Venus in December 2016. The Twitter feed indicates that, following a disruption of JAXA's Earthbound activities due to the Sendai earthquake, Akatsuki has resumed nearly daily radio contact with Earth.

JAXA's IKAROS flew past Venus in December and has been operating successfully since May 21, 2010, really an amazing accomplishment for such a small, experimental craft. Follow the IKAROS blog to keep up with its relatively infrequent contacts with Earth.

NASA's Stardust spacecraft was decommissioned on March 24, so this will be its last appearance in this update. Farewell, Stardust!