Saturn's raging northern storm has been watched since it began by amateur astronomers, and now Cassini is getting in to the act too. Presumably once astronomers realized the magnitude of what was going on, some of Earth's great observatories were also occasionally pointed at the ringed planet to watch the storm grow. One of those great observatories is Hubble, and it got this view of Saturn's storm on March 12, a view that was quickly processed by Ted Stryk. Actually the detail is from March 12; the color is from an earlier observation. Hubble gets great detail on the curly, whorly southern boundary of the storm. 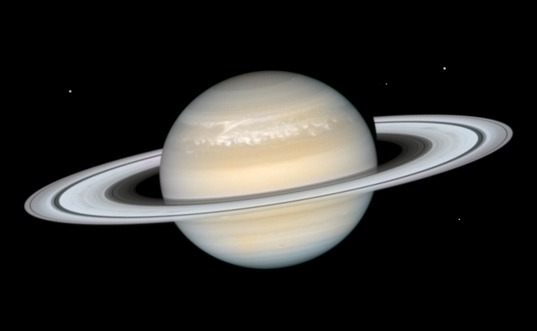 From 2010 to 2011, a storm raged on Saturn. Over time, the storm has been stretched into the white band seen in the mid northern (upper) latitudes. This view, taken on March 12, 2011, shows the late stages of the storm.

I keep forgetting that it's even possible for amateurs to get their hands on Hubble data so quickly. Most data from the Hubble Space Telescope is kept under wraps for a year-long proprietary period, allowing the scientists who proposed for time to aim the instruments to produce their research and publish about it before other scientists get to it. A few scientists wave off the proprietary period and allow instant data release. And images taken for non-science reasons (including public outreach) are usually available immediately, according to Ted.

It's not quite as easy to get to these data as it is to the quickly-released rover or Cassini images. It's not because they want to make it hard; it's because the only way to get to it is through the same interface used by scientists, so it's not wrapped up in layman-friendly snazzy Web design. The advantage, though, is that if you go to the trouble to look for it, you are really getting your hands on the actual science data, not reduced-quality versions of the images as with the rovers and Cassini.

Here's how to browse Hubble data. There's a search form here. In the Target Name field, write what you're looking for. If it's Jupiter you want, you could put in Jupiter, but you actually wouldn't get all of the Jupiter images because some scientists have called the target jup-rings or other such names. So it's best to use wildcards, like *jup*. Then -- and this is key -- in the Resolver field, select Don't Resolve. This tells the search engine not to try to convert the name you've entered into a single position on the sky; planets and other bodies are moving targets. Then, in the lower part of the form, under Sort By, select Start Time and check the box next to Reverse to place the most recent images first in the search results. Then search away. Any data sets that have a yellow highlighted "@" symbol next to them are still in their proprietary periods; anything without that is publicly available. You'll have to figure out how to download and process the pics yourself. I'm grateful to Ted for telling me how to do this search -- I'd spent an hour trying to locate the data he used for his image of Saturn, and couldn't find it until he told me about that "Don't Resolve" business.

I was curious what the data looked like before colorization, so here it is. It's cropped differently because, a bit farther to the right, there's another moon in the field of view: Rhea. Interestingly, Titan was located just about as far as it could possibly get from Saturn at the time of this observation. (You can see that here.) 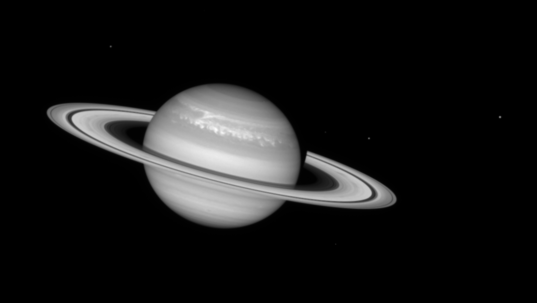 Saturn as viewed by the Advanced Camera for Surveys on March 12, 2011, as a storm had encircled its northern hemisphere. Moons visible in the view include, from left to right, Dione, Enceladus, Tethys, and Rhea.