Phobos LIFE gets a ride on Endeavour as Shuttle LIFE!

This is cool in several ways. The Planetary Society is contributing this thing called the Living Interplanetary Flight Experiment (LIFE) to Russia's Phobos sample return mission -- it's basically a sealed puck with dormant microbes inside that'll fly to Mars and back in the return capsule, and biologists will take a look to see what damage the little bugs suffered during their space journey. In a Catch-22 that is central to the problem of getting new tech into space, it's easier to launch stuff to space if it's already been launched to space before. The Society now has the opportunity to fly LIFE to space before it gets put on Phobos-Grunt by flying it on -- amazingly (to me anyway) -- one of the final Shuttle flights, Endeavour's upcoming launch. Learn more about Shuttle LIFE here! (Bill Nye will explain, in video format.) 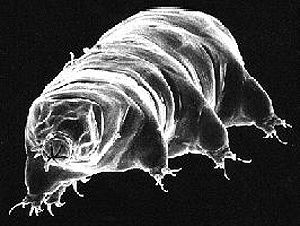 Known scientifically as "tardigrades," are minute creatures ranging in size from 0.1 to 1.5 millimeters. Thanks to their ability to enter a state of cryptobiosis, (suspended animation) when faced with hostile conditions, these creatures have been found in nearly every environment on Earth: from the high Himalayas to the deep oceans, and from the arctic ice-caps to the tropics. Tardigrades are extraordinarily hardy and can survive extremes of heat and cold, high and low pressure, high radiation, and dehydration.