What's that in my eye? Must be a piece of stardust that's making my eyes water as I read that Stardust will be given its very last command tomorrow, a command that'll end its long life, but give its builders one more piece of valuable data in the process. Tomorrow at 4:00 p.m. my time (23:00 UTC), Stardust will turn its medium-gain antenna to Earth, and then will be instructed to burn every last molecule of propellant that its helium tanks can force through its rockets, and then to turn off its transmitter for good. Why? I can't really explain it any better than the JPL announcement did, so I'm going to just paste their text below. Before that, I'll salute Stardust one last time, and thank the ship yet again for a job well done. 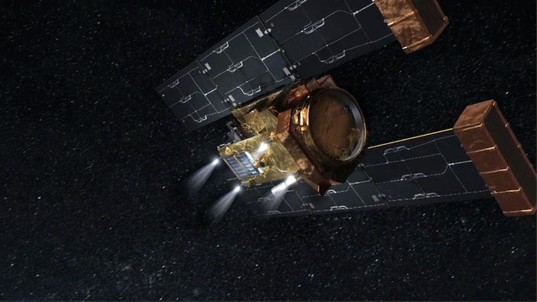 On Thursday, March 24 at about 4 p.m. PDT (7 p.m. EDT), NASA's Stardust spacecraft will perform a final burn with its main engines.

At first glance, the burn is something of an insignificant event. After all, the venerable spacecraft has executed 40 major flight path maneuvers since its 1999 launch, and between these main engines and the reaction control system, its rocket motors have collectively fired more than 2 million times. But the March 24 burn will be different from all others. This burn will effectively end the life of NASA's most traveled comet hunter.

"We call it a 'burn to depletion,' and that is pretty much what we're doing -- firing our rockets until there is nothing left in the tank," said Stardust-NExT project manager Tim Larson of NASA's Jet Propulsion Laboratory in Pasadena, Calif. "It's a unique way for an interplanetary spacecraft to go out. Essentially, Stardust will be providing us useful information to the very end."

Burn to depletion will answer the question about how much fuel Stardust had left in its tank.

"We'll take those data and compare them to what our estimates told us was left," said Allan Cheuvront, Lockheed Martin Space Systems program manager for Stardust-NExT. "That will give us a better idea how valid our fuel consumption models are and make our predictions even more accurate for future missions."

Fuel consumption models are necessary because no one has invented an entirely reliable fuel gauge for spacecraft. Until that day arrives, mission planners can approximate fuel usage by looking at the history of the vehicle's flight and how many times and for how long its rocket motors have fired.

Stardust's burn to depletion is expected to impart valuable information, because the spacecraft has essentially been running on borrowed time -- for some time. Launched on Feb. 7, 1999, Stardust had already flown past an asteroid (Annefrank), flown past and collected particle samples from a comet (Wild 2), and returned those particles to Earth in a sample return capsule in January 2006 -- and in so doing racked up 4.63 billion kilometers (2.88 billion miles) on its odometer. NASA then re-tasked the still-healthy spacecraft to perform a flyby of comet Tempel 1, a new, low-cost mission that required another five years and 1.04 billion kilometers (646 million miles). After all those milestones and all that time logged on the spacecraft, the Stardust team knew the end was near. They just didn't know exactly how close.

Prior to this final burn, Stardust will point its medium-gain antenna at Earth -- some 312 million kilometers (194 million miles) away. As there is no tomorrow for Stardust, the spacecraft is expected to downlink information on the burn as it happens. The command from the spacecraft computer ordering the rockets to fire will be sent for 45 minutes, but the burn is expected to last only between a couple of minutes to somewhat above 10 minutes. It is estimated the burn could accelerate the spacecraft anywhere from 2.5 to 35.2 meters per second (6 to 79 mph). ?

"What we think will happen is that when the fuel reaches a critically low level, gaseous helium will enter the thruster chambers," said Larson. "The resulting thrust will be less than 10 percent of what was expected. While Stardust will continue to command its rocket engines to fire until the pre-planned firing time of 45 minutes has elapsed, the burn is essentially over."

Twenty minutes after the engines run dry, the spacecraft's computer will command its transmitters off. They actively shut off their radios to preclude the remote chance that at some point down the road Stardust's transmitter could turn on and broadcast on a frequency being used by other operational spacecraft. Turning off the transmitter ensures that there will be no unintended radio interference in the future.

Without fuel to power the spacecraft's attitude control system, Stardust's solar panels will not remain pointed at the sun. When this occurs, the spacecraft's batteries are expected to drain of power and deplete within hours.

"When we take into account all the possibilities for how long the burn could be and then the possible post-burn trajectories, we project that over the next 100 years, Stardust will not get any closer than 1.7 million miles of Earth's orbit, or within 13 million miles of Mars orbit," said Larson. "That is far enough from protected targets to meet all of NASA's Planetary Protection directives. "

Some planetary spacecraft, like the Galileo mission to Jupiter, are intentionally sent into the planet's atmosphere to make sure it is destroyed in a controlled way. Others have their transmitters shut off or just fade away, said Larson. "I think this is a fitting end for Stardust. It's going down swinging."

Use Eyes on the Solar System to experience Stardust's final hour before decommissioning.