Dawn's instruments are being roused for Vesta approach

Today the Dawn imaging team released a photo from the main camera, the Framing Camera, symbolizing that they're preparing to start Dawn approach science; the other two science instruments, a spectrometer and a neutron detector, are also being turned on and checked out. This photo just shows a star field; Vesta is not in it. Vesta would be the brightest spot in the field, if it were in there. I actually do not know where this star field is and am wondering if any of you astronomers out there can figure it out. Thanks to everyone who suggested I use astrometry.net to figure out where the starfield is. The Framing Camera field of view is 5.5 degrees square -- that's 10 or so full moons across, so it's a decently big though not constellation-sized chunk of sky. 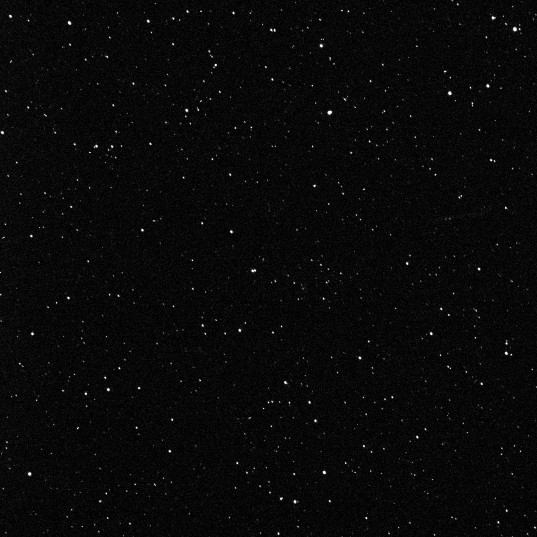 This image of a field of stars demonstrates that the framing camera on board NASA's Dawn spacecraft is functioning properly. Vesta is not visible in this view. The image was obtained on March 16, 2011. The Framing Camera has a 5.5° by 5.5° field of view.

JPL also issued their own news story on this photo, in which they said:

In the months to come, the camera system will provide images needed to navigate the spacecraft to its rendezvous with Vesta, and will begin to image the asteroid's surface. These early images on approach will be the start of a campaign to systematically map Vesta's surface in detail and will provide tantalizing clues as to its mineralogical composition. In addition, the framing cameras will search for moons in Vesta's vicinity and look for evidence of past volcanic activity.

Marc Rayman described these activities in much more detail in his May 2010 Dawn Journal. This isn't the first time that the Framing Camera has been used; far from it. Here's a couple of other posts containing Framing Camera images, from December 2007 and during the Mars flyby in February 2009, as two examples.