Kirby Runyon is a longtime blog reader and commenter who recently followed his interest in space to graduate school; he's a second-year grad student at Temple University in Philadelpha, researching fault-controlled fluid flow at the Cerberus Fossae and Athabasca Valles, Mars. He offered to send me some writeups of selected presentations from last week's Lunar and Planetary Science Conference, and I enthusiastically agreed. I would LOVE to see more students do the same. Kirby says "I love everything space-related, and I'm thrilled to be at LPSC as a graduate student!" --ESL

On Monday morning, Jim Head gave a talk about the source of water for present-day gully formation on Mars. There seems to be a global cryosphere (like a frozen water table). The cryosphere has been laid down throughout the late Amazonian (the most recent era in Martian geologic history), within just the last few 10 to 100s of million years. A lot of this ice was laid down during periods in which Mars had a high obliquity (high axial tilt). It turns out that most of the time, Mars has a very high obliquity leading to heavy glaciation. Right now, though, Mars is in a rare time of low obliquity corresponding to an interglacial period. This means that, for the time being, a lot of the ground is visible in which to study the past! How fortuitous!

Later in the same session, Colin Souness took a look at the nature of what are called viscous flow features (VFFs). These are landforms that look a lot like glaciers on Earth. The only reason scientists shy away from calling them "glaciers" is because that term implies an origin and operating mechanism. For instance, using the word "glacier" implies a mechanism for how the glacier flows down hill. On Earth, the base of the glacier melts, and that liquid between the ice and the ground facilitate the glacier's downhill crawl. This is important because the Martian VFFs may not have melting at their base. Past Martian climatic information can be gleaned by knowing whether the VFFs had "warm" or "cold" bases (that is, whether they had melting at their bases or not). If they had meltwater at their bases, the recent Martian climate (in the Amazonian time period) was likely warm. If evidence suggests the VFFs did not have liquid at their bases then the late Amazonian climate was likely below water's freezing point. Souness mapped where the VFFs occur on Mars and found out that the most important factor controlling where VFFs were clustered was local relief: the steeper the local topography, the more likely you could expect to see VFFs. Local relief matters more than elevation or latitude in determining VFF preponderance. This means that the VFFs likely do not flow from the buildup of ice at altitude and so flow in a different manner from Earth's glaciers. The climatic implication for the time of their formation, the late Amazonian (within the last 10s to 100s of millions of years), is therefore that it was below water's freezing temperature.

On Tuesday morning, Martin Jutzi suggested a new idea to explain the strange situation of the Moon, whose near side crust is much thinner than that on the far side. He proposed that two moons originally formed around Earth as the result of "the" Moon-forming impact. He says two moons could have orbited Earth stably for some time before the smaller moon impacted "the" Moon. If the smaller moon impacted under the right set of conditions (that is, the right impact velocity and angle), it could have been "pasted on" to one side of the Moon, creating a thicker crust on one side. The Moon would then reorient so the thickest crust would be on the anti-Earth hemisphere. Trying to understand why the Moon is asymmetrical has been the focus of a lot of debate over the years, and this is just one more idea. However, this idea informed by more data than previous ones, particularly Lunar Orbiter Laser Altimeter (LOLA) data.

On Wednesday morning, Peter Schultz gave a positively riveting talk on some strange structures seen on the nucleus of Comet Hartley 2 during the Deep Impact flyby. His study looked at different terrain types on the comet, and he focused a lot of attention on spires up to 60 meters tall seen right around where the jets emanate. It may be that spires are constructed from fine dust emerging from jets like cones around terrestrial geysers. Or, they could be the eroded surface of the comet. To determine if the spires are constructional or erosional features -- now, this is a common joke at LPSC -- we need more data! I can just imagine it, standing on the surface of the comet you'd be surrounded by towering spires with gas, dust, and icy dirt clods flying out of them! I've seen geysers go off in Yellowstone, but standing on the surface of a comet and seeing THAT would top everything! 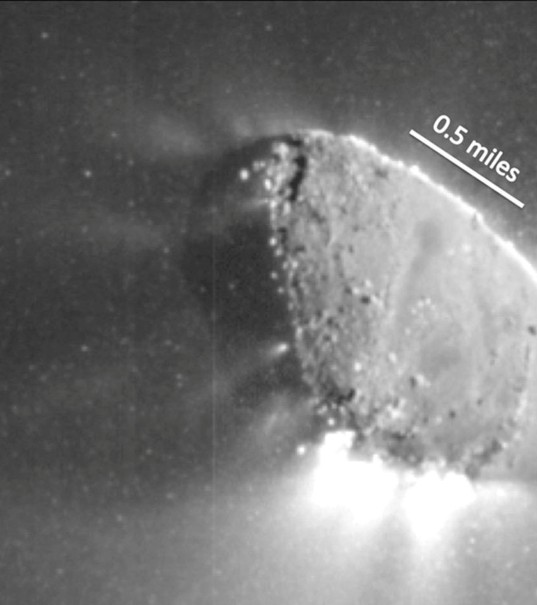 Hartley 2 is an unusually active small comet, a fact made clear by this enhanced view of its night side captured by Deep Impact near its closest approach on November 4, 2010.

On Wednesday afternoon, Harry Hiesinger talked about boulders of ejecta found around the lunar crater Aristarchus. The blocks show alternating light and dark layers, but the dark layers are thinner. This is an exciting discovery! What is surprising is that layering is not found in the crater walls. However, other craters on the Moon do have layering in their walls but no layering in ejected blocks. He suggests that the light-toned layers are from basaltic lava flows, and the thinner dark layers resulted when the top of the lava flow cooled quickly in the vacuum and became glassy and vesicular ("Swiss cheesy"). This explanation is also consistent with the observation that the dark layers look friable and are thinner than the light areas. You can read more and see pretty pictures in his abstract.

I was very interested in Veronica Bray's talk about pits in the middle of craters on Ganymede and Mars. It's pretty common to see craters with central peaks, but some craters have central pits. That's weird, because central peaks are normally formed from isostatic rebound of the crust as a result of the initial impact, but how in the world would you ever get pits?! She looked primarily at central pit craters on Ganymede and on icy terrains on Mars using 3D digital elevation models (DEMs) from stereo pair images. I emailed her for clarification on how she thinks the pits formed, and she was gracious enough to send the following image and explanation: 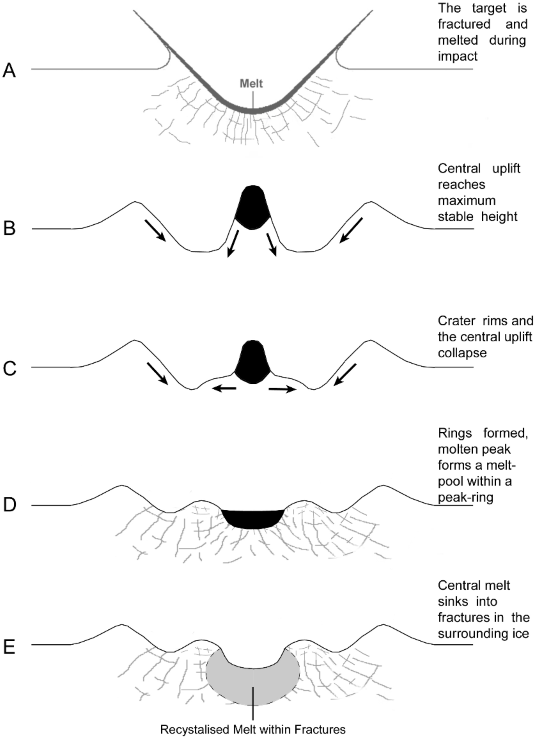 A model for how pit-floored craters form

To conclude my coverage of LPSC, I want to focus on one of the poster presentations by a graduate student from Temple University -- me! I'm doing my master's thesis research on a very large Martian outflow channel called Athabasca Valles. It begins suddenly along some enormous canyon-like cracks in the ground called the Cerberus Fossae, which can be thought of as a miniature version of Valles Marineris. No good explanation exists for how so much water could have been forced up from underground to carve the Athabasca Valles outflow channel, so I decided to map the fracture density all along the Cerberus Fossae as part of my master's thesis research. A network of cracks extending deep into the Martian crust can provide conduits for water to come to the surface. I use HiRISE images in all their high-resolution glory of 25 centimeters per pixel to show that fractures become more numerous right around Athabasca Valles and are sparser elsewhere. That means the hydraulic permeability (how easily water can flow underground) is also higher right around Athabasca Valles, which helps explain how as much water as that contained in Lake Erie -- or more -- could have escaped and flooded the region. Hopefully, I can write up all my work in time to graduate this May! 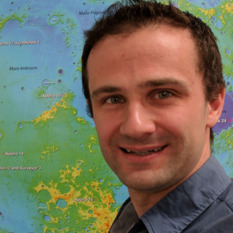